Advani served God's own party well, but even He can't save the man now 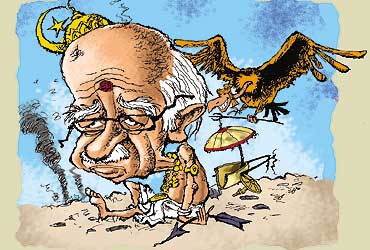 To watch a political party in the throes of dismemberment is not a pretty sight. Sadly, that is precisely what we are witnessing now. The RSS is swearing at the BJP, the BJP is swearing (privately) at the RSS, and the VHP, which has a limited vocabulary at the best of times, is simply going for the jugular. In public life, sniping may be an entertaining spectator sport—especially for news channels—but Indian democracy is the ultimate loser if the country's only right-wing formation is irreparably damaged.

The BJP tries manfully to promote the "closed chapter" thesis. Unfortunately, the chapter has just opened. We are in for a prolonged bout of name-calling, confusion, abuse, censure and topsy-turvy politics. Some say, wait for the Bihar elections, things will clear up after that result. Mr Advani, however, may not even have till November, and given his at once stubborn and sullen mood at present, he might like to revisit the Pakistan project with one more trip to Jinnah country. He's like an injured tiger getting ready for another kill. Will he be allowed to stage one last battle?

BJP insiders, meanwhile, insist his days are numbered. With the RSS gunning for him openly and his chelas unwilling to fight his war against Messrs Sudarshan and Singhal, the sitting president has become a very, very lame sitting duck.

The conventional and unconventional wisdom within God's own party is that Advani's position as chief has become impossible. He will have to quit for two fundamental reasons:

1) Relations between him and the parivar have reached a point of no return. There is rancour, bitterness and huge mistrust. Can he function even minimally with the parivar bluntly hostile to him?

2) Advani has become a deeply divisive figure for his own party. The "emotional blackmail" and "tongue-lashing" he delivered to his handpicked second-rung leaders, and the manner in which they compelled him to capitulate on his "grand project", has left both sides fuming.

Moreover, the lone argument for Advani continuing as president has been partially refuted. We were told the new-generation leaders hate each other with such passion that for them to work together without Advani's calming hand was unthinkable. Our old friend TINA was dusted up and resurrected. Yet, as the temporary resolution of this emergency has shown, these allegedly fratricidal ladies and gentlemen buried their differences and worked together in perfect harmony to resolve the crisis.

If, for instance, Sushma Swaraj or Arun Jaitley were to become president in today's peculiar circumstances, there is no reason to assume the others will sabotage the new incumbent. Some initial turbulence may be inevitable, but it's still preferable to the current disarray.

L.K. Advani has served the BJP with distinction, devotion and unparalleled success. In the interests of the party and decency, some way must be found to give this wounded warrior an honourable farewell.