The World Is My Thali

From puri-aloo to McAloo Tikki burger, from Raj to rajma, fusion to confusion, we have run the gustatory gamut. 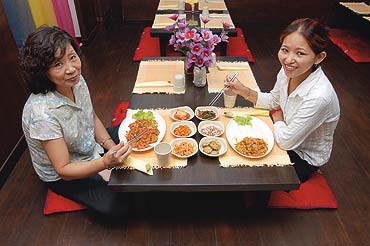 outlookindia.com
-0001-11-30T00:00:00+0553
If you could bottle the tastes of the first year of Independent India, it would make a strange elixir. There would be the lines of demarcation drawn by the vendors of 'Hindu paani-Musalmaan paani', before Bisleri decommunalised drinking water. There'd be the sweetness of tricolour mithai, the debates over whether ground pista was best for the green of the flag, or whether green apple peel added a better flavour to patriotic laddoos, barfis, katlis and sandeshes. There would also be the sour tang of the water with lime juice and the orange juice with which Gandhiji broke his last fast, starving himself in protest against Partition's bloodshed.

In the early years of Independence, we ran the gustatory gamut from feast to famine—sometimes all too literally. The British legacy of large, meat-heavy meals and a lavish high tea was emulated by "modern" Indians. Home cooking was, in the heyday of the joint family, an occupation that required the employment of different cooks for different courses, and the full-time supervision of generations of women.

But memories of 1943, when famine cast its terrible and familiar shadow, were strong, and one of the first things the new Indian government did was to make a pledge that India would be self-sufficient, that no Indian would ever starve again. This particular tryst with destiny would be kept only to be broken, as the powder of ground mango kernels and the starchy taste of the water left over from boiling rice became, on and off, the flavours of life for all too many Indians. 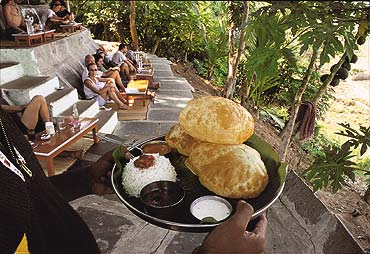 firangs figure out 'bhatura' at Mango Tree in Hampi

Homesickness combined with entrepreneurship as refugees flooded in from Pakistan, changing the cuisine of the Grand Trunk Road as they struggled to make new homes, new lives. From Peshawar, Lala Kundan Lal Gujral brought the spices of the Frontier and the secrets of the tandoor. Most food historians agree he was the first to introduce tandoor-style cooking in its contemporary form to Delhi, in 1948, when Moti Mahal was set up. By the '50s, a dish invented to use up the leftover juices from trays of tandoori chicken had become a big draw for local Dilliwaalas, and soon become a staple of dhaba and North Indian restaurant cooking. If you added tomatoes, cream, some rough spices and dollops of butter to leftover tandoori chicken, what you had was 'Butter Chicken'. We couldn't get enough of it.

The Indian Railways marked the slow shift in Indian tastebuds. The practice—still tenacious, even today—of carrying home-cooked food in metal tiffin-boxes on a journey was shifting, as old caste and religious taboos relaxed. Hawkers at the stations sold aloo-puri or fresh steaming vadas, luchi-aludom in Bengal and puri-chholey in Punjab. The railways offered Indian food, often cooked in the pantry car, omelettes and boiled eggs, limp Continental vegetables and tired roast chicken, and in a fine gesture of egalitarianism, tomato soup. This soup was one of the most pernicious legacies of British cuisine, a thin liquid that had nothing in common with either our robust shorbas and spicy rasams or the nourishing soups Mrs Beeton put her faith in—some of us still see it as the final revenge of the Raj.

By the 1960s, culinary revenge was a thriving industry. Nelson Wang, a colossus in the world of Chinese-Indian or Chindian cooking, invented Chicken Manchurian around '64, when he added chicken, soya sauce and cornflour to a base of chopped ginger, garlic and green chillies. Prawns Koliwada and Chicken 65, on the indigenous front, were equally bastardised versions of local cuisine, designed to please taste-buds accustomed to quantities of masala.

The craze for phoren was fuelled by the restrictions on travel abroad, converting even the most humble products into alluring icons from brave new worlds. Patisseries like Wenger's in Delhi, Harison's Hotel in Madras and Nahoum's in Calcutta introduced us to the delights of fudge and eggless brownies alongside sandesh, barfi and payasam. The possession of a tin of Kraft cheese (it tasted like spongy doorsteps), a bar of Toblerone, or genuine Digestive biscuits from England conferred a kind of godhead on the owner. 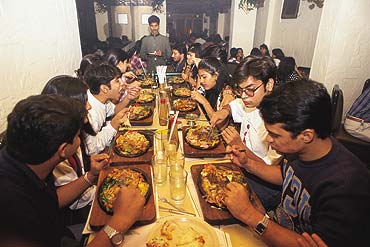 Cubes of Kraft cheese attached to soggy cocktail onions with toothpicks were a favourite 'cocktail' savoury, if equally deadly to both the palate and the digestion. The more Anglicised homes could be identified by their devotion to mutton cutlets (which improved no end when Calcutta's chefs added a spicier keema mixture), Worcestershire sauce and a gummy compound called white sauce that shrouded the corpses of everything from Continental vegetables to chicken. Caramel custard was bad enough, but its poor cousin, blancmange, terrorised boarding school and college hostel tables for years.

By the '70s, the first great wave of migrants from South Asia were challenging the world's taste-buds. In a fine riposte to the 'tomato soup', chefs from Sylhet added, according to legend, Campbell's tomato soup and cream to a perfectly innocent chicken tikka, creating chicken tikka masala. (It became so popular in the UK that by 1983, G.K. Noon had added it to the list of packaged Indian foods he sold to Waitrose—it became one of the most successful ready-to-eat foods ever.) 'Balti' cuisine mimicked the traditional way of serving food in brass or steel buckets at langars and weddings, but evolved as Indian cooks abroad incorporated black grape juice and finer cuts of lamb instead of goat into their cuisine.

Meanwhile, back home in the late '60s and early '70s, much older, sadder thinner flavours haunted Bengal and Bihar, as the spectre of famine appeared again—farmers and the landless begged for bowls of 'phaan' (water left over from boiling rice); sattu, that nutritious staple made from ground channa, was a luxury; even a scant handful of puffed rice was out of reach. Thousands died, not because food wasn't available, but because they couldn't afford it. 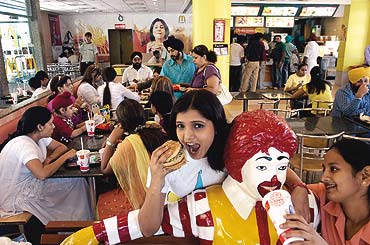 Mac Classics didn’t click, alu tikki was the one

By the '80s, the first winds of change were sweeping through India. Nirula's offered Indianised pizzas, and young students from the hill boarding schools would save up 'tuck' money for the visit to Delhi, land of hot chocolate fudge sundaes and paneer-tikka pizza. We were beginning to suspect that Toblerone wasn't the world's best chocolate after all, though the craze for canned goods—then-exotic vegetables like button mushrooms, asparagus and bamboo shoots—continued. Some of the more sophisticated travellers were bringing back news that cheese wasn't a single, amorphous category, and over time, Brie, Camembert, Indian-made zeera Gouda and black-pepper Cheddar would supplant Kraft—and also, sadly, banish salty, succulent Jewish mozzarella or smoky Bandel cheese from the table.

By the '90s, we could travel abroad, and we did, apparently endlessly. Outlook even chronicled a new Indian trend—as the Indian family changed shape to nuclear, as jobs became more demanding and the domestic kitchen shrank, we took to eating out with a vengeance. You could see it in the ads for cooking classes for prospective brides. Marwari brides schooled in the art of pickle-and-puri making were now sent off to learn the intricacies of Italian-style pasta and Thai green curries. Roasted red peppers and aubergines were very acceptable to the Indian palate, even more so if they were sprinkled with kala namak, amchur (dried mango powder) and topped off with green chillies. Fusion cuisine, exuberantly transformed into something more like confusion cuisine, was the norm, with baby corn and baby carrots finding their way into spicy sabzis.

McDonald's and Kellogg's were among the new mncs to come in, initially greeted with protests and protesting palates. Kellogg's had to persuade Indian families to abandon their alu-paratha and idli-sambar, but their real battle was to get Indians used to adding cold, not hot, milk to cornflakes. McDonald's beefless burgers shocked the rest of the world, but it tried and failed with a whole range of MacClassics until it reinvented alu tikki as the McAloo burger.

Sixty years after Independence, we have more adventurous palates. We're just as willing to excavate the mysteries of less explored Indian cuisines—Konkan, Oriya, the delicate and strong flavours from the Northeast—as we are to plunge into the world of Thai cooking, or to explore sushi (very acceptable to Indians) and sashimi (raw fish doesn't go down so well, especially in non-coastal areas). As more communities from more countries come into India, there are small pockets where you can find brand new tastes. Chennai and Delhi both have excellent Korean cuisine, in small restaurants that cater to homesick executives; Nigerian eateries in Mumbai offer fufu and ebiripo to students caught in an often hostile land; Israeli restaurants offer competition to the 'German' bakeries of another era in the stark landscape of Leh. Give it a few years, and our definition of "Indian food" might include kimchi pulao, arugula pakoras and meat cholent with naan. Not a problem: there's always been room for more on the great Indian thali