The World Is His Wankhede

A generations-spanning giver of joyful pride bows out. Thank you. 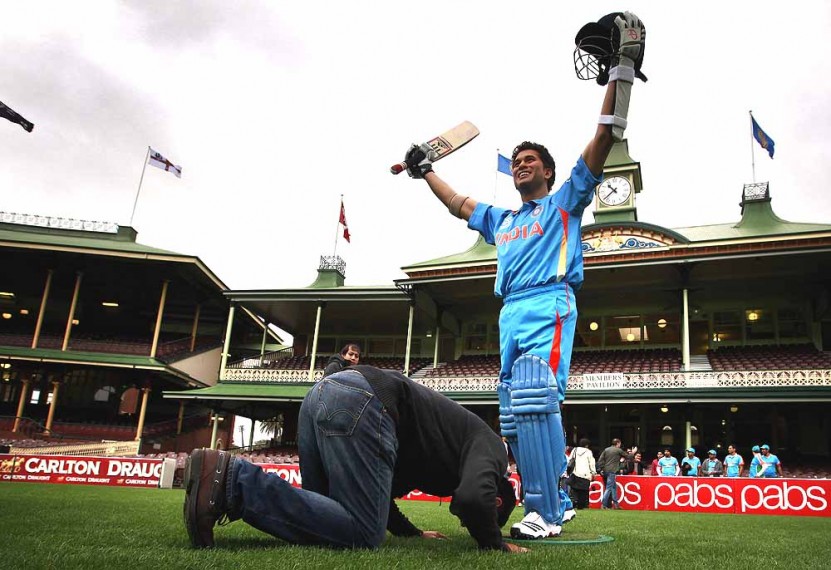 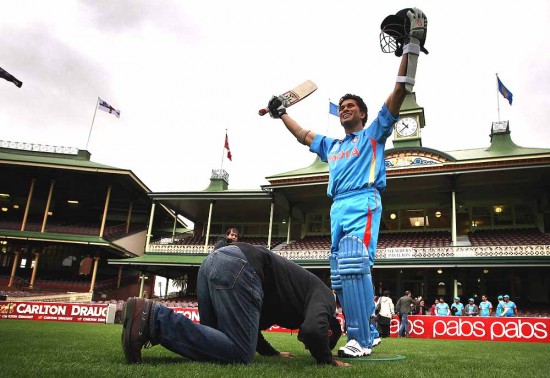 Like thousands of other cricket-crazy Indians, I am making a pilgrimage to Wankhede stadium this week to watch Sachin Tendulkar play his last game in India colours. Unlike many, I won’t be holding a ‘god’ placard. In a country where godmen notoriously have feet of clay, I remain deeply suspicious of human divinities. I have travelled to bid farewell because I genuinely believe,  with Tendulkar, we are in the presence of sporting greatness. To be in the crowd will be to share in the collective joy of being part of a city, a community, indeed, a nation, which has lived almost vicariously through the achi­e­vements of a little boy from Sahitya Sahwas who has become a true legend. A sapling we saw flower in the maidans who has grown to be a banyan under which we all now seek shelter from the big bad world.

In the age of hyperbole, the word ‘great’ is often widely misused. Last year, CNN-IBN in partnership with Outlook had carried out a public poll to discover the ten greatest Ind­ians since 1947. Tendulkar was the only sportsperson who made the list, in tenth position, in a remarkable scroll of honour headed by Dr Babasaheb Ambedkar. Lata Mangeshkar in music and Sachin in cricket stood out in a list dominated by politicians of another vintage. What is it about Tendulkar that makes him so special?

First, the sheer weight of statistics. If a 99.94 average res­erves a big niche for Bradman in history books, Sachin’s 100 international hundreds confer on him a similarly unique space. There was a time when 100 first-class hundreds was considered a mighty achievement; to think someone would score them solely in international cricket was a feat previously unthinkable. It’s more like Bob Beamon’s Olympic long jump record than a Roger Bannister’s under-four-minute mile: a record that promises to stand the test of time.

Then there is the longevity factor. It has been said before, but it bears repetition. When Tendulkar began his first-class cricket career at the ridiculously tender age of 15, the Berlin Wall was still intact, the Soviet Union had not been dismantled, the rupee was 17 to the dollar, Rajiv Gandhi was prime minister, the mobile hadn’t arrived, Shahrukh hadn’t delivered his first hit, and yes, the great Pete Sampras, long since retired, had not won a single Grand Slam. Most ‘great’ sportspersons traverse one generation: Sampras, Federer, Schumacher, Pele, Maradona, Carl Lewis. Tendulkar alone in the modern era has traversed two. I saw a baby-faced Tendulkar bat in a local club game first when I was 21 years. My son is now 18 and will see an ever-enthusiastic Sachin play his 200th Test match! A Mumbai cricket friend put it well: “We have all grown old watching Sachin while he remains eternally young and passionate about cricket!”

Thirdly, Tendulkar’s greatness has und­­oubtedly been magnified by the fact that he plays a sport which is now an intrinsic part of India’s multi-billion dollar entertainment industry. Chess is played in more countries than cricket, but a five-time world champion like Vish­wanathan Anand will never get the same reverence because his sport is unsuited to the television era. Sunil Gav­askar was, for teenagers growing up in the 1970s, a cricketing genius. That he has never received the kind of adulation that follows Tendulkar only confirms how a 36-inch television set can enhance an individual’s image and bring it into the hearts, minds and drawing rooms of every Indian. Maybe, Gavaskar was also reared in a decade of scarcity, which is why he fought for every run and, often, the ‘honourable’ draw. Sachin was a product of a more expansive age where India had learnt the art of winning and you could be more extravagant in your shot-making, and also in personal taste (somehow, one can’t imagine a Gavaskar buying a Ferrari).

Sachin was born in an era when we were desperately short of ‘real’ heroes. In an age of violence and scams, we hankered for one who'd rid us of terminal cynicism.

Fourthly, the manner in which he has carried himself on and off the field. ‘Balance’, the hallmark of his batting, is an off-field personality trait too. It could have been so easy for Sachin to be carried away by fame: this, after all, is a generation where even a single Test century is enough for a young cricketer to have attitude. In the many years I have known him, one has never seen Sachin lose his cool or lower his guard in a manner that would compromise his dignity. For someone who has been a master of the game, he has always been a servant to its great traditions. Maybe at times he has been too cautious, often not speaking out on cricketing controversies that deserve a voice. Truth is, a Ganguly could take his shirt off on a Lord’s balcony to exemplify a ‘New India’ aggression; Sachin confined his intimidation to hitting a Shane Warne out of the ground. In a sense, Sachin represented the best of an emerging middle class: he had the dedication, determination and discipline instilled by a family environment based on old-fashioned values, but he also had the self-confidence to be unchained by insecurities of the past.

The legend has another vital component we often miss: Sachin is born in an era where we have been desperately short of ‘real’ national heroes. Of the ten Indians who made the final list of the CNN-IBN-Outlook poll, Tendulkar alone was born after 1947. This is an era of political pygmies, that’s why you see Narendra Modi desperate to app­ropriate the Patel legacy and the Congress harp on Nehru and Indira (all three, Nehru, Patel and Indira were in the top ten greats). Amid scams and vio­lence, corruption and terrorism, we have han­kered for that one Indian who can rid us of widespread cyn­icism: someone to give us a sense of  pride, hope and identity in a complex uni­verse, someone who gives us a self-belief that we can compete and be the best. Our film stars live off endless self-promotion; our politicians have a deep credibility crisis; our doctors and scientists are still to win a Nobel. In the music world, we are still looking for the next Lata; in philanthropy, we still search for a Mother Ter­esa, even the corporate world still looks for another JRD. With Tendulkar, our search for the ultimate cricket hero ended.

Which is why he is India’s greatest anti-depressant. Turn the clock back to that innings in Chennai within a month of the 26/11 terror attack, when Tendulkar’s bat seemed to provide a balm to a wounded nation. Or that one slashing six off Shoaib Akhtar in a World Cup match in 2003, which was famously described as ‘ending a decade of  inferiority’ when confron­ted with Pakistani fast bowling. Or those magical innings in Sharjah in the late ’90s which appeared to take the mind away from the political tumult at home. Or even a match against England in 1993 when he and his childhood pal Vinod Kambli brought hope to a Bombay torn apart by riots. Why, even that one over of bowling India to victory in a Hero Cup final against South Africa in ’93, when his sheer exuberance appeared to deflate his opponents!

In a sense, my returning to Mumbai for Tendulkar’s last game is also part of the circle of life. Twenty-five years ago, on December 11, 1988, I bunked office to watch Sachin score a hundred in his first first-class game against Gujarat. That evening, I wrote about what one saw as ‘history in the making’. This is how I ended the article: “The first hint of a new spring in Indian cricket was felt today. And I was privileged to be there at its inauguration.” My editor at The Times of India was kind enough to carry it on the front page, my first bylined front-page piece in journalism. For that, and much else, it is time to say, quite simply: Thank you, Sachin!

(The writer is editor-in-chief, IBN 18 network)