The Wonder That Was Indira

She was a woman to love, to admire, and beyond that—to be feared 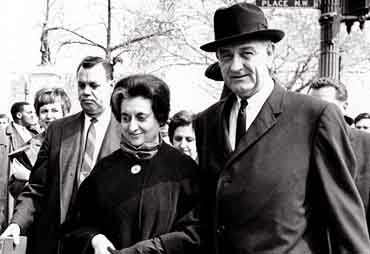 Indira: The Life of Indira Nehru Gandhi
By Katherine Frank
HarperCollins Pages: 567; Price: 595
I knew Indira Gandhi. I knew people now dead whose names appear in this biography and I know all the living as well. I've read every biography on the subject and having myself written a book about her return to power after her defeat in the elections following the abrogation of the Emergency, I can say without hesitation that Katherine Frank's biography is well-researched, unbiased and more readable than any published before. That, despite some printing errors and misspelt names.

Indira Gandhi was a very good-looking woman, not of the pin-up kind but an indescribable aristocratic type. She reminded me of Hilaire Belloc's lines:

Her face was like the King's command
When all the swords are drawn.

Amongst the many men who were bowled over by her looks was President Lyndon Johnson of the United States. Just before a dinner hosted by the Indian ambassador B.K. Nehru and his wife Fori for Indira at which vice-president Hubert Humphrey was to be the guest of honour, Lyndon Johnson stayed on tossing glass after glass of bourbon on the rocks while talking to Indira. He readily agreed to stay on for dinner to which he had not been invited. At a reception at White House, Lyndon Johnson asked Indira to dance with him. She refused on the grounds that it would hurt her image in India. The President understood. He wanted to see "no harm comes to the girl". He sanctioned three million tons of wheat and nine million dollars aid to India.

The only person on record who made derogatory references to Indira's looks and intelligence was her aunt Vijayalakshmi Pandit. Indira never forgave her or her daughters for slighting her. She never forgave anyone who said anything against her.

She was equally touchy about her health. While still a girl she was suspected of having tuberculosis (her mother had died of the disease). She had regular medical check-ups. Most doctors who examined her advised her against having children. "If it had been up to me, I would have had eleven...this diagnosis provoked me, it infuriated me." It was her husband, Feroze Gandhi, who wanted only two.

Almost as if to prove doctors wrong, she undertook arduous journeys on horseback, on elephants and on foot, covering vast distances and carrying out punishing schedules of speeches to vast audiences across the country. In the elections following her defeat after the Emergency she toured northern India for days, sleeping less than four hours at night. She turned up at a dinner hosted by the German ambassador looking as fresh as the proverbial daisy. When I asked her if she did not feel fagged out, she replied: "Tiredness is a state of the mind, not of the body."

There was much speculation about Indira's private life. She admitted to Pupul Jayakar that while a student at Shantiniketan she'd fallen in love with a German who taught her French. They continued to exchange correspondence till she married Feroze Gandhi. From Frank's biography it would seem the only man she fell in love with was Feroze. Though advised against marrying a Parsi with no family background by her father and Mahatma Gandhi (Vijayalakshmi advised her to take him on as a lover rather than a husband), she stuck to her resolve and married him with their blessings. It was only after his infidelities that the marriage turned sour. He flirted with Indira's cousins, had an affair with Tarakeshwari Sinha, Mehmuna Sultana, Subhadra Joshi and others. She temporarily broke with him but as often happens, she forgave her husband.Not, however, the women who had associated with him.

It was after the publication of M.O. Mathai's autobiography that some of Indira's affairs came to light. A chapter entitled She was withheld by the publishers but, according to Frank, cyclostyled copies were widely distributed by Maneka Gandhi after she fell out with her mother-in-law. Mathai claimed to have been Indira's lover for 12 years and once made her pregnant. She had to have an abortion. Mathai lost out to Indira's yoga teacher Dhirendra Brahmachari and later Dinesh Singh who was a minister of her cabinet. The historian S. Gopal believes Mathai's relationship with Indira had crossed permissible limits; B.K. Nehru supports him: "It is more fact than fiction," he told Frank. I knew the three men. Mathai was a singularly unattractive man with little to say for himself. But people under public gaze cannot afford to have liaisons with persons of their choice. The body has its own compulsions and finds outlets easily available. Mathai was a live-in secretary-stenographer. Though I regard spilling the beans after enjoying intimacy with a person a most ungentlemanly thing to do, I am willing to believe that for some years Mathai was Indira's lover. Dhirendra Brahmachari was a tall, handsome Bihari who had an hour with Indira behind closed doors every morning. Yoga lessons may have ended up with lessons from the Kamasutra. As for Dinesh Singh, it was he himself who allowed gossip about his relations with the prime minister to spread. At many late night dinners in the homes of diplomats, he arranged for messages to be sent that Indira would like him to drop in on her on his way home. None of this tittle-tattle should be allowed to cloud the image of Indira Gandhi as a great leader. She had dictatorial tendencies, indulged in gross favouritism, overlooked corruption and systematically undermined democratic institutions. She wanted to set up dynastic succession. She manipulated and gagged the press. She may not have been averse to having people who knew too much from being bumped off, as Frank seems to suggest in her book. Men like Lohia who described her as a goongi gudiya or Morarji Desai who called her a chhokree were wide off the mark. Maneka was closer to the real Indira Gandhi in comparing her with goddess Kali who drank human blood. She was able to get away with what she did because India's poor millions loved her as Amma—Mother.

Emergency has become an ugly word to be used to malign Indira Gandhi. Frank points out that it was Jayaprakash Narayan's call for "total revolution" including gheraos of legislative assemblies and Parliament that justified the draconian measure. When first imposed, it was generally welcomed. And it was not so much Indira but the people around her who misused its provisions to settle personal scores or enrich themselves. They included her son Sanjay, his wife Maneka and her mother Amteshwar, family friend Mohammed Yunus, civil servants Krishan Chand (Lt Governor of Delhi), Navin Chawla and a few others. Indira understandably had a say in drawing up the list of people who were to be arrested. The Rajmata of Gwalior and Gayatri Devi of Jaipur were locked up in Tihar jail along with common prostitutes; Amteshwar (described as "flamboyant, aggressive"), Maneka, "cigarette-smoking...loud, boisterous, uninhibited. .disrespectful of her mother-in-law...highly discordant presence" in Indira's "haven of peace", had their own pet hates they wanted to cut to size; Navin Chawla, according to the Shah Commission, "not only specified who should be arrested and jailed but also how they should be treated in prison".His orders included "the construction of special cells with asbestos roofs to bake" in the summer heat; Mohammed Yunus ordered the information and broadcasting minister to close down the bbc office and arrest its correspondent Mark Tully, "pull down his trousers, give him a few lashes and send him to jail". Indira could not have known that all this was being done in her name. During the Emergency, the reins of power had slipped out of her hands and were grabbed by her son, Sanjay.

There was a strong streak of vengefulness in Indira Gandhi. This came out in all its ugliness in her dealings with her younger daughter-in-law Maneka. She never liked her or her mother. After Sanjay—whom she both loved and feared—died, she made Maneka unwelcome in her home and showed marked preference for Sonia. She behaved like any village mother-in-law would.

Another characteristic Indira developed after years of being in power was to snub people who least expected to be. At my repeated requests, she agreed to see Kewal Singh who had been her foreign secretary and ambassador in Washington. She gave him a dressing down till he broke down. She did the same to Jagat Mehta whose posting as ambassador to Germany she cancelled after it had been accepted. Her special venom was directed towards her cousin Nayantara Sehgal. First she superceded Mangat Rai who was living with Nayantara. Then she revoked her appointment by Morarji Desai as ambassador to Rome. But in my own way, I admired, loved and feared Indira.

Sonia Gandhi is reported to have asked Kapil Sibal and Natwar Singh to examine the book and advise her if the author can be sued for libel. I trust they will tell her there is nothing libellous in it and banning a book only enhances its sales and readability.

On A Swing And A Prayer