Indian, European influences coalesce seamlessly in old Calcutta, amid environs rarefied by an illustrious past 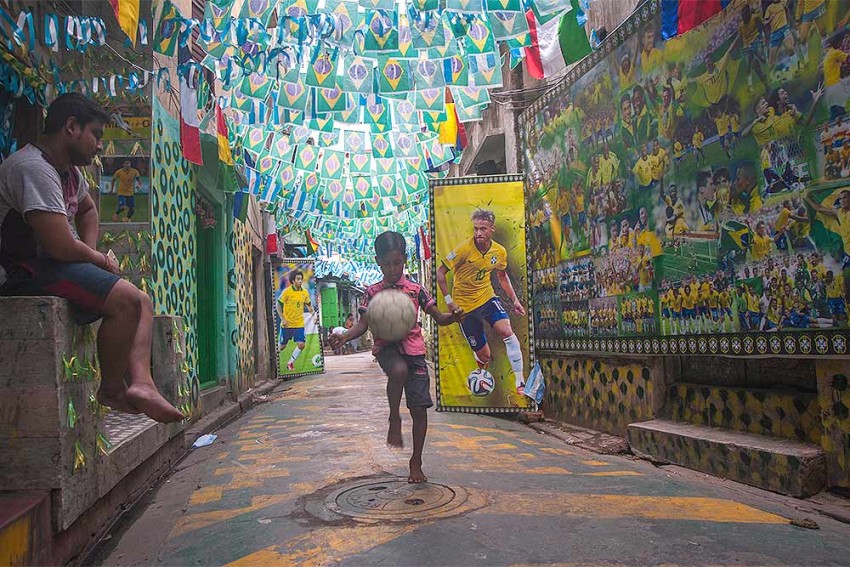 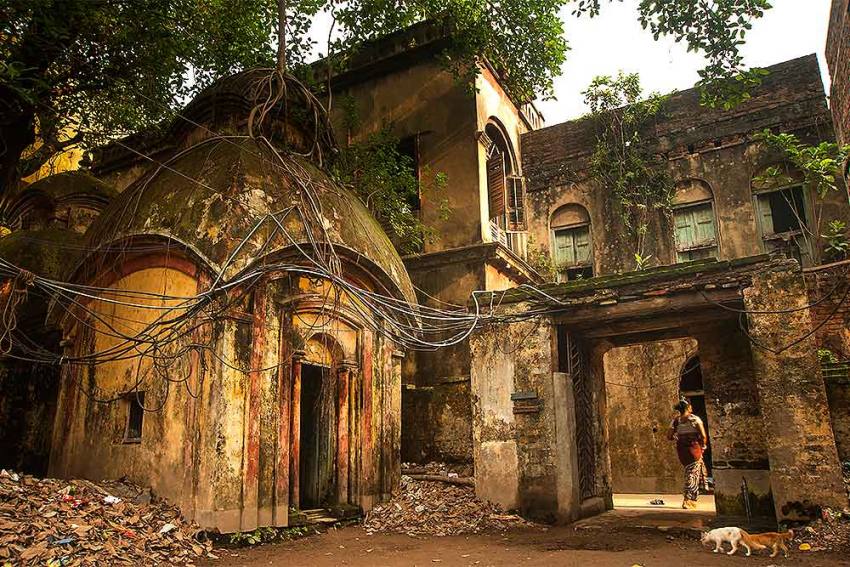 The unimistakable sloped cupola of Bengal marks this Shiva temple, said to be 300 years old, and possibly built by owners of the once-impressive house beside it;
Photograph by Goutam Roy 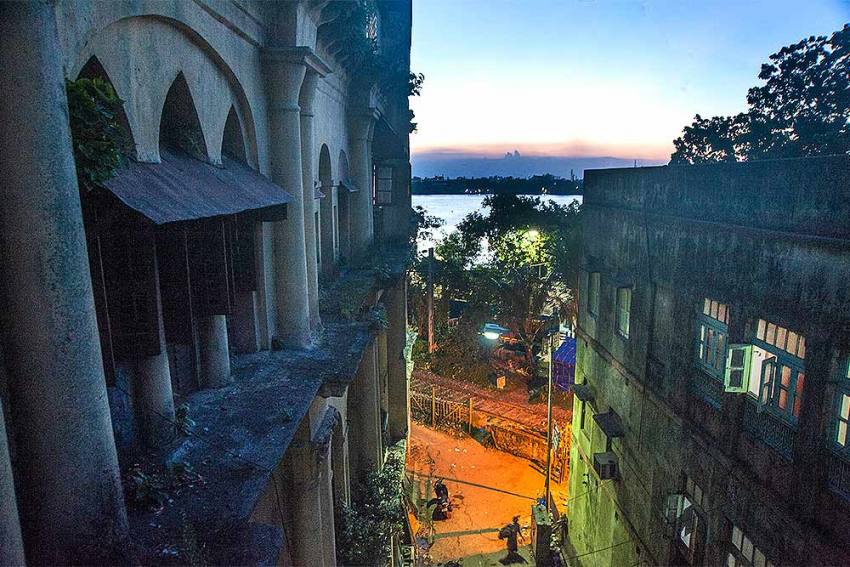 Yellow and white streetlights eat into the ethereal gloaming at dusk in a lane at the edge of the city. Beyond flows the Hooghly, serene and majestic.
Photograph by Goutam Roy 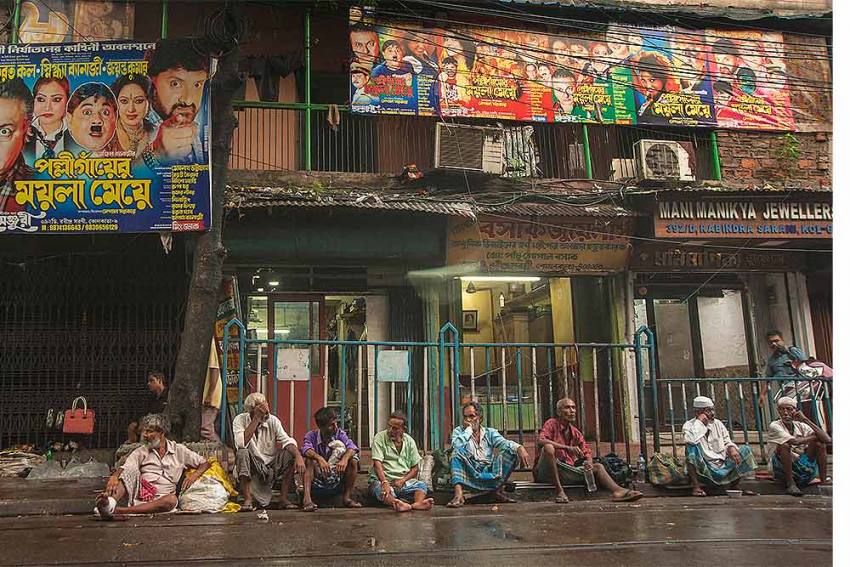 Jatra, a traditional form of theatre, exerts its old pull through hoardings at Rabindra Sarani (formerly Chitpore Road), as a group of labourers are beset with more pressing worries
Photograph by Goutam Roy 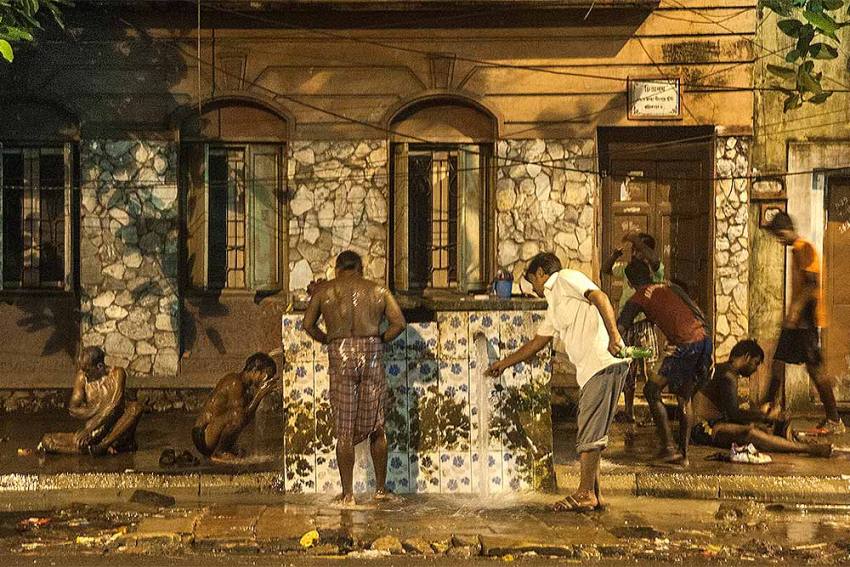 British-laid pipelines supply river water; after a day’s work, an evening bath is routine for many
Photograph by Goutam Roy 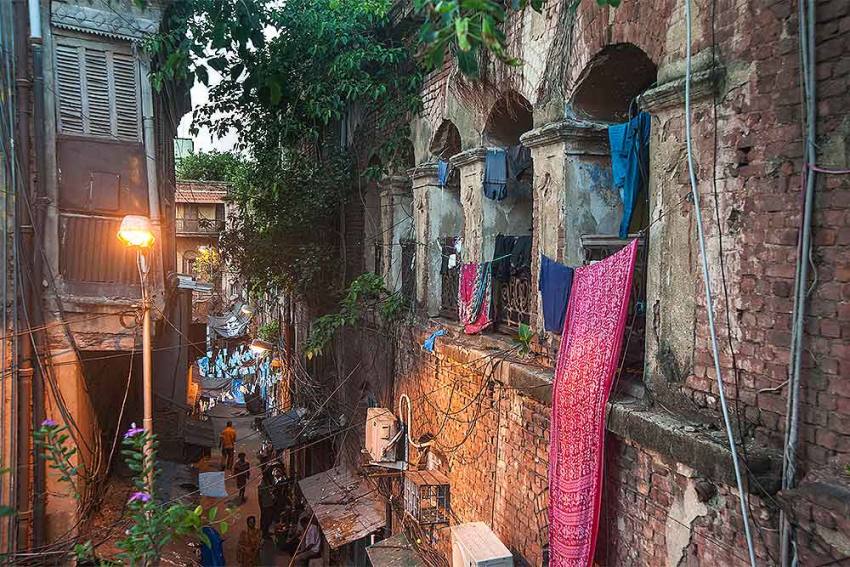 Biswambhar Lane is flanked by houses with covered verandahs, a north Calcutta staple, and the scuffed exterior of a grander, arched abode, now festooned with makeshift clotheslines
Photograph by Goutam Roy 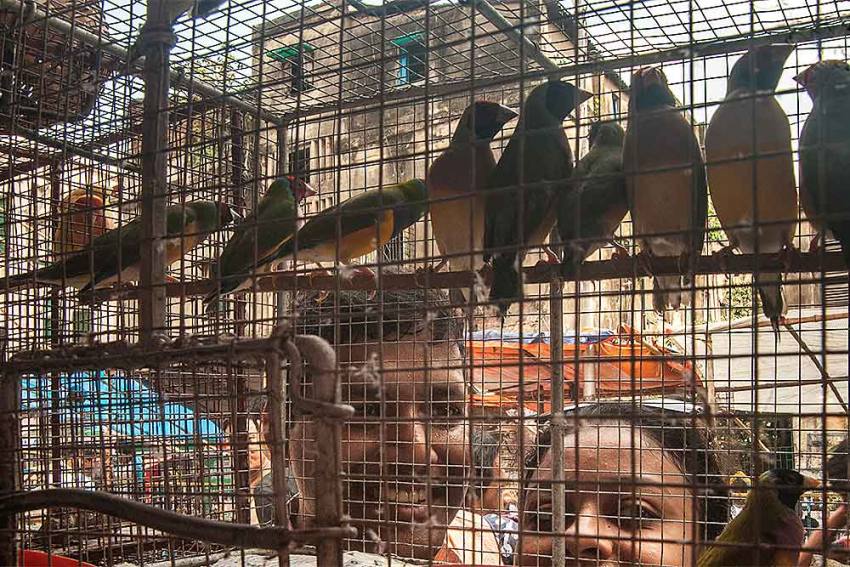 Cheer among chirps at Calcutta’s oldest pet market, now displaced from its traditional home at Hatibagan to Gallif Street
Photograph by Goutam Roy 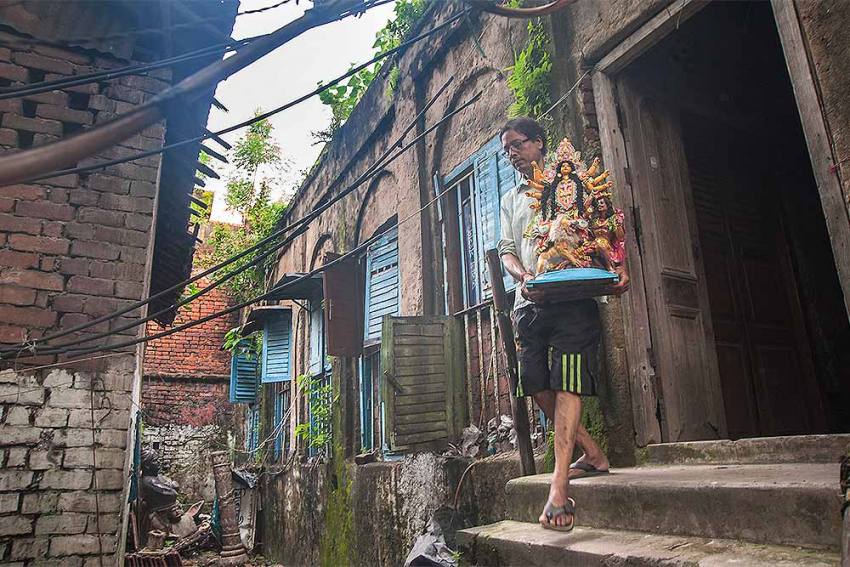 The drumbeats to the approaching Durgapuja are faint, but audible. At Kumortuli, the colony of earthenware- and idol-makers, a tiny Durga is carried away. Note the Grecian bust, once the pride of a private garden, in the left corner.
Photograph by Goutam Roy
September 27, 2018 00:00 IST The Walls Speak Calcatian

The palaces and mansions of Calcu­tta’s old, ‘native’ quarter, or ‘Black Town’, were built from the second half of the 18th century through to the 19th, along the same time the British erected the mighty edifices of the seat of empire to the south. Zamindars built their townhouses there; others were constructed by traders who got enormously rich through trading with the East India Company. The facades of the grandest buildings were often built in the Doric, Ionic and Palladian styles, with more traditional interiors cen­­tred around a courtyard, complete with a place for worship (tha­­kur­­dalan). Such houses were crammed with priceless treasures imported from Europe, their gardens studded with neo-classical statuary; the owners led opulent, ‘decadent’ lives—money was thrown away on pigeon fights, pets’ ‘weddings’ and nautch-girls—‘Baboo culture’, too, is a byword for old Calcutta.

A century—or two—on, many of these mansions have aged gracelessly, but wear their decrepitude with a defiant insouciance characteristic of Calcutta: time has stained them with moss and soot, trees have clasped them in mighty embraces, sending roots through the crumbling stones. And the warren of narrow streets that bind them in a serpentine grid, trodden by generations, have heaved to the tumult that is Bengal’s history in the 20th century—armed revolutionary assaults at the heart of the Raj, the misery of famine in 1943, the bloody convulsion of Partition and the abortive Naxalite revolt against the State that flared up in rom­antic idealism and burnt out through misguided factionalism. Old Calcutta is also the seat of Bengali theatre, the cauldron in which much of the city’s unique cuisine was perfected and the stomping ground of the luminaries of Bengal’s rem­ar­kable socio-cultural effl­orescence in the 19th century. Life courses around all this in its quotidian dru­dgery, or ind­olent loftiness, barely mindful of the air thick with mystique.

Time hangs heavy on its streets, not in careful, exa­cting con­­servation expectant of tourism, but in living, breathing, careworn sentience. The ‘city of palaces’ has long seen off its ‘dreadful nights’; it now makes a last, urbane stand against the homogenising fingers laid by globalisation on the rest of the city.