The Wall: Brick, Mortar and All

Some of his memorable and momentous innings 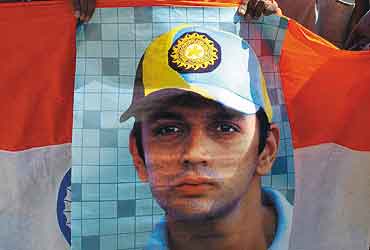 190 vs New Zealand at Hamilton, 1998-99
Dravid dominated a day and a half with a gloriously elegant 190, his then highest Test score. He shared three substantial partnerships: first with Sachin Tendulkar for 109, then with Javagal Srinath for 144 runs for the eighth wicket and then with Venkatesh Prasad for 61 runs for the ninth wicket. Finally, Dravid, entrenched for more than eight hours, during which he hit 31 fours, played a tired shot. Match ended in a draw.

200 not out vs Zimbabwe, at Delhi, 2000-01
Dravid, accompanied first by Shiv Sundar Das and then the mercurial Tendulkar in two successive century stands, passed 3,000 Test runs. He remained till the end to complete a flawless double-hundred, his first such effort in 39 Test matches, from 541 minutes of stay that occupied 350 balls and 27 boundaries. India went on to win the match by seven wickets.

180 vs Australia at Calcutta, 2000-01
One of the greatest innings ever played, and also part of the magnificent 376-run partnership with 'Very Very Special' Laxman which helped India to register an incredible victory against world champion Australia. His chanceless 180 came from 353 balls in seven hours and 24 minutes, with 21 fours. India won by 171 runs.

217 vs England at the Oval, 2002
Dravid took his crease occupation for the series past 30 hours—about eight showings of the Oscar-nominated Lagaan—and made his then highest first-class score in ten and a half hours. He was finally run out after 629 minutes, 468 balls, and 28 boundaries. The match was drawn.

233 vs Australia at Adelaide, 2003-04
Two solid innings of 233 and 72 not out helped India score a four-wicket win over Aussies—their first one Down Under in 22 years and only the fourth ever. He became the second Indian and eleventh player in the world to make at least four double centuries in Tests; third Indian after Laxman and Gavaskar to aggregate over 300 runs in a Test, and partnered Laxman in another 300-plus stand.