The Wagah Of Words

A Pakistani magazine goes from lessons in Gurmukhi to printing poetry and stories. Punjabiyat is in spate. 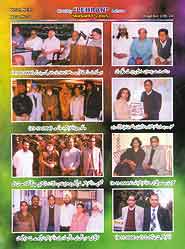 Some time last year, Punjabi writers in India were pleasantly surprised to find that Lehran, a Punjabi literary magazine published in Pakistan, had included two pages in which readers were given basic lessons in reading Gurmukhi—the script used to write Punjabi in India. Since then, Lehran has moved ahead and its latest issue carries many articles and poems in both Gurmukhi as well as Shahmukhi, the Persian script used to write Punjabi in Pakistan.

The ongoing Indo-Pak peace process has kicked off an intense interest in both Pakistani and Indian Punjab to read and access Punjabi literature written on the other side of the border. After the heady political dos and tamashas symbolised by Punjabi 'jhappis' last year, it's a revival of the spirit of Punjabiyat, and language is among the first meeting points. While the Punjabi language is spoken in much the same way across the border, it is the written word where they differ. So, magazines like Lehran and Punjab, another literary publication from Lahore, have begun carrying transliterated extracts of short stories, poems and articles in both scripts. Says Karnail Singh Thind, a prominent Punjabi academic, "This is a major development because for long Gurmukhi was frowned upon in Pakistan as the fundamentalist elements there associated it with Sikhism. These initiatives are a commendable effort of some Pakistani Punjabis to create interest in Punjabi literature written in India." 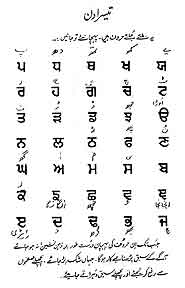 This finds a resounding echo in India, where acceptance and transliterations of Punjabi literature originating in Pakistan has been much greater. Roughly 140 books by Pakistani authors have been transliterated into Gurmukhi in India and many are taught in Masters courses in Punjab's universities. Shahmukhi has also been introduced as an optional subject in the Guru Nanak Dev University, Amritsar, for the Masters courses in Punjabi. When Nirupama Dutt, a journalist and Punjabi writer, visited Pakistan last year she found that "some professors at the Punjabi languages department of Punjab University, Lahore, have unofficially begun teaching Gurmukhi to their students." Though 80 million people in Pakistan speak Punjabi, the language does not enjoy official recognition and, much to the chagrin of its proponents there, is not even taught in its schools. "There is a realisation now that no study of the Punjabi language is complete without reading the works in Gurmukhi because after Partition the growth of Punjabi literature was more in Indian Punjab than in Pakistan," she says.

Some publishing houses like Ilyas Ghuman's Institute for Punjab Languages and Culture, Lahore, are engaged in transliterating Indian works to Shahmukhi. Amin Malik, a prominent Punjabi poet-writer of Pakistan, and his wife Rani, have gone a step further. Their books Bolde Athru (Tears That Talk) and Main Hanju Kehri Akh Da (Of Which Eye Am I a Tear) have been published in two halves—first in Shahmukhi, then its transliteration in Gurmukhi. Malik told Outlook, "Punjabi thrives more in rural areas in our country. There is a realisation now that since this is our mother tongue, we should promote and preserve this more than Urdu, the state language."

Dr Pritam Singh, the grand old man of Punjabi language, observes, "We have noticed that a group of progressive Punjabi intellectuals, who were subdued during the earlier fundamentalist regimes in Pakistan, have become more active. There is a trend there now among writers, publishers and opinion leaders, to learn Gurmukhi so that they can read contemporary Punjabi poetry and literature written in India." He believes that though the elitist Muslims still have reservations about promoting Punjabi at par with Urdu, there is a surge of support from the rural heartland, prompting local politicians to take up its cause. Take, for instance, the announcement made by Pakistan Punjab's chief minister Pervez Elahi that legislators in the Punjab assembly will be permitted to speak in Punjabi. Or, that he will try and introduce Punjabi language in primary classes. Lehran, meanwhile, is keeping up the good work and its editor, Akhtar Hussain, has emerged as a vocal champion for the introduction of the Punjabi language in schools.

Then there is Abhai Singh, a Chandigarh-based writer who has recently published a book, Learn Punjabi in Gurmukhi, Shahmukhi and Roman. "It's aimed at lovers of the language on both sides of the border, to enable them to read stuff written on both sides," he says.