Can the written-off regain their relevance? 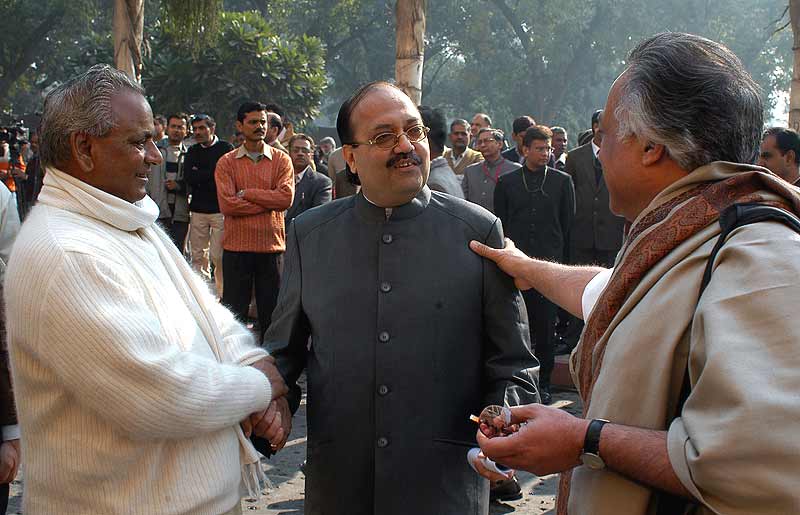 Is it rapprochement time for political bigwigs estranged from their parent outfits? Both Kalyan Singh and Amar Singh are moving heaven and earth to stage a return to the BJP and the SP respectively. The two have a lot in common, though they are perceived as being poles apart ideologically. The parallel: both, at one point of time, enjoyed the most coveted position in their organisations till they were unceremoniously shown the door, following which they chose to float their own outfits. These turned out to be miserable flop shows.

Both had also irritated their peers by promoting women. Kalyan left no stone unturned in hoisting up Kusum Rai, who rose from political non-entity to a position of prominence in the BJP for whom she is currently a Rajya Sabha MP. Amar airlifted yesteryear cinestar Jayaprada from her home in Andhra Pradesh to the political arena of Rampur, from where she became the SP’s representative in the Lok Sabha. Kusum’s meteoric rise from small-time party worker was unpalatable to most BJP partymen, while Jayaprada was an eyesore for vociferous senior SP leader Azam Khan, who’d stood by Mulayam Singh since the party’s early days.

SP head Mulayam Singh is said to be flirting with taking Amar Singh back; Kalyan Singh has a few backers in an uncertain BJP.

But that is all history. Both men are currently in career salvage mode, trying to return to their parent parties. This isn’t the first homecoming attempt for Kalyan who had earlier left the BJP due to differences with the top brass and floated his own Rashtriya Kranti Party (RKP), which did not grab more than four seats in the 2002 state polls. He later crossed sides to help the SP form a government in 2003. Kalyan’s son Rajbir was made an SP general secretary, and given a berth in the Mulayam cabinet. After securing a special slot for Kusum Rai, Kalyan declared war on the BJP. He didn’t mince words, flaying stalwarts like A.B. Vajpayee and L.K. Advani with the choicest invectives. The marriage did not last long—although Kusum came away from the mess with a ministerial bungalow that was allotted for life to a hurriedly floated trust in her father’s name (also a non-entity).

Kalyan managed to gain re-entry into the BJP in 2004 when he swore to bring the party back to the centrestage of UP politics. But after making no difference to the BJP tally in the 2007 state assembly election, he made another inglorious exit just before the 2009 Lok Sabha polls. And fell back into Mulayam’s arms once more. Mulayam imagined he would get the votes of Kalyan’s Lodh community. Kalyan won the seat from Etah, but the handshake proved dear for Mulayam as it alienated Muslims (Kalyan was once a Ramjanmabhoomi movement hero and UP chief minister when the Babri Masjid was demolished). After the SP tally in the Lok Sabha plummeted from 35 seats in 2004 to 22 in 2009, Mulayam promptly severed ties again and apologised to Muslims. Which is why Kalyan is desperate to get back to the BJP. Fellow Lodh and Hindutva icon Uma Bharati is lobbying for him, but many in the party are opposed to giving him another chance.

Similar arguments are being articulated in the SP against Amar Singh, who has, rather late in the day, realised the futility of trying to carve out a Thakur fiefdom of his own. Mulayam, sources say, is ready to forgive and forget as Amar lobbyists (including a prominent Noida-based industrialist and a powerful IAS officer) have told the venerable leader that he needs a fixer to realise his long-cherished desire to become PM in 2014.

Mulayam had a major fraud and laundering case against Amar dropped, paving the way for his return. But Azam Khan who’d once opposed Kalyan’s entry, is now doing the same with Amar, reminding Mulayam that Amar was the Kalyan votary in the old SP. Kalyan shot back: “It wasn’t Amar Singh who asked me and my son to join SP in 2009; Mulayam personally came to my house in Delhi to strike a deal.” Will realpolitik trump all?

An Area Of Openness