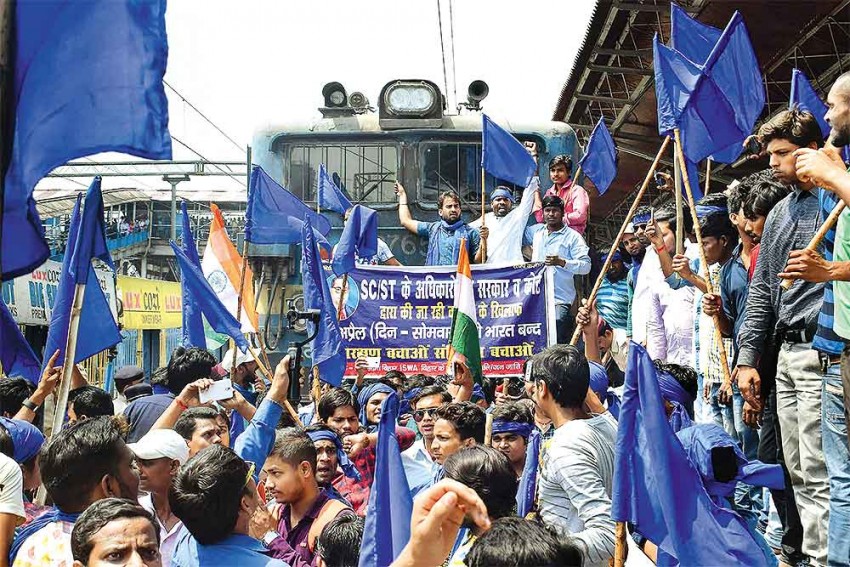 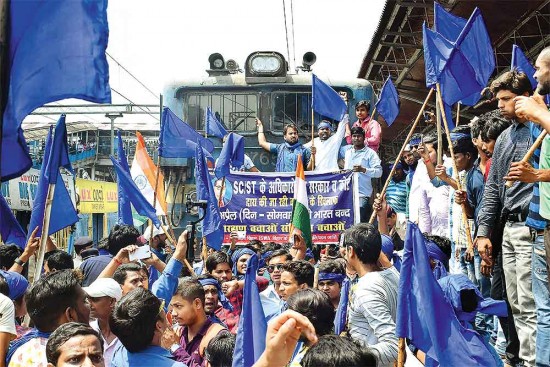 Last Sunday, on a muggy afternoon, Udit Raj, who represents North-west Delhi in the Lok ­Sabha, made his way to Mohan ­Nagar, a bustling Ghaziabad suburb, to address a meeting of the All-India Confederation of Scheduled Castes and Scheduled Tribes Organisations (AICSO). The mom­ent he arr­ived, the BJP MP, who is also the ­AICSO’s national chairperson, was greeted with angry slogans by a group of 10-odd young men in the crowd, asking him to quit the BJP. Later, they were escorted out of the venue when they tried to disrupt his speech.

The young men were voicing the growing disquiet among Dalits, who comprise nearly 17 per cent of India’s population, and a section of whom had come to support the BJP at the peak of the ‘Modi wave’—one of the key factors that went into the making of the ­party’s triumph in the 2014 general elections, and subsequent ­successes in many states, especially Uttar Pradesh.

Read Also: ‘I Have Faith In The PM, The Law Won’t Be Changed’

‘Social-justice’ parties in the NDA and Dalit MPs of the BJP want the ‘pre-dilution’ Atrocities Act restored.

A series of alienating events during the Narendra Modi government’s reign has, however, queered the pitch for Dalit leaders who joined hands with the BJP. Prominent among them were the January 2016 suicide of Hyderabad University research scholar Rohith Vemula, who alleged a casteist witch-hunt by the administration; later that year, the flogging of four Dalit youth in Una town of Gujarat’s Gir Somnath district; in 2017, the pol­ice crackdown on Dalits following clashes with Rajputs in Saharanpur, western UP, and the ­continued incarceration under the National Security Act of Bhim Army leader Chandra­shekhar Azad ‘Raavan’, who was mobilising Dalits in the reg­ion against caste atrocities; the crackdown on Dalits in Maharashtra after clashes with right-wing outfits following the commemoration of the Battle of Bhima-Koregaon in January this year; and alleged dilution of the Scheduled Caste/Scheduled Tribe (Prevention of Atro­cities) Act, on top of the persistently low conviction rates in atrocity cases.

“Dalits are agitated with the party (BJP) after rec­ent events,” admits Udit Raj. “This is why there is a huge difficulty.” This “difficulty” is plaguing not just this leader, nor just BJP MPs representing constituencies res­erved for the SCs and STs, but almost every party in the BJP-led National Democratic Alliance (NDA) that contests elections on the social justice plank. Apparently mirroring a deep disquiet in the communities they woo for votes, even an appointment to the National Green Tribunal (NGT) seems to have been perceived as an insult to Dalits. When Justice A.K. Goel was appointed the NGT chairperson in June, it was seen as the government “rewarding” him for issuing, as a Supreme Court judge, the March 20 order that introduced new limitations on the application of the Atrocities Act.

“The weakest people suffer the most from violence. And that’s why the Atrocities Act mustn’t be weakened.”
Savitribai Phoole, Bahraich MP, BJP

“He should be removed (from the NGT). This app­ointment sent out wrong signals to the people,” says Udit Raj, one of the several MPs who have been opposing Goel’s appointment. Ram Vilas Paswan and Chirag Paswan of the Lok Janshakti Party, Republican Party of India (RPI) president Ramdas Athawale, the Rashtriya Lok Samta Party’s Upendra Kushwaha and Bahraich MP Sadhvi Savitribai Phoole of the BJP are among those who want the government to res­tore the “pre-dilution” Atrocities Act via an ordinance or legislation. They, too, seek Goel’s removal.

“We do contemplate many options, including resignation,” says another leader who has spoken out against the NGT appointment and weakening of the Atrocities Act, but doesn’t wish to be identified. These leaders, perhaps, have little choice but to speak out as they may have much to lose from the ongoing caste-based polarisation. Dalits are mobilising for another ‘Bharat bandh’ (all-India strike) on August 9; the first, on April 2, had left at least 10 Dalit men dead, while large numbers were arrested in the aftermath. “The April 2 mobilisation has had a huge bearing on Dalit society and politics. It can’t be left unaddressed,” says Udit Raj.

Explaining why the Dalit MPs are furious, Savitribai Phoole, one of the few ruling party MPs to support the April strike, blames the government for the spurt in crimes against Dalits and pandering to its dominant-caste voters, reflected in the watered-down Atrocities Act. “Their Constitution is the Manu Smriti and they are implementing it across the country,” she says. “This is why Bahujans are being suppressed across the country.” Phoole wishes the proposed August 9 bandh doesn’t end up like the April 2 one. “The weakest people suffer the most every time there is violence. And it is for their safety and survival that the Atrocities Act must be restored to what it was before being diluted,” she says.  For former Rajya Sabha MP Ambeth Rajan of the BSP, the fight is for a “fear-free India” where Dalits no longer have to fight the dominant castes for their lives and dignity.

Athawale, who is minister of state for social justice and ­empowerment and believes the Modi government has “done more than any other” for Dalits, says the community is angry over Goel’s app­ointment. “The government didn’t give him that post—the Supreme Court did that. And yet the Dalits feel it was because of his ruling on the Atrocities Act,” says the RPI leader from Mah­arashtra. “The government has already filed a writ petition to have the ruling reconsidered in the Supreme Court. The cabinet, too, may meet to discuss intervening via an ordinance.”

Kushwaha, minister of state for HRD and an OBC leader from Bihar, doesn’t agree that the government has nothing to do with the choice of NGT chairperson. “The Supreme Court recommends, the government appoints. It could have just returned the recommendation. The government reversed the decision on the court-ordered freeze in reservations in promotions; it can do the same for the Atrocities Act,” he says. “I hope the government agrees and there’s no need for an agitation.”

According to Athawale, Goel’s judgement says the courts will not interfere in Parliament’s law-making domain, but it also says 90 per cent of cases under the Act are ‘false’. “Courts have the right to release people if there is no evidence against them, but when a Dalit house is burned, or a Dalit is murdered or raped, it’s called persecution, not ‘false’ cases,” he says.

For leaders of these ‘social justice’ parties, the bandh on August 9—a day before Parliament’s monsoon session concludes—could mean a critical turn of events. Not only is their core political base among SCs and OBCs starting to question them, the spectre of mass mobilisation could make these smal-ler partners in the NDA even more dep­endent on the BJP for pol­itical salience and share in power. Indeed, Athawale says, “So much strife bet­ween Dalits and Savarnas is not to eit­her’s advantage.”

Another concern weighs upon these leaders: the potential conflict they can foresee between their own voters and the BJP’s. Though the BJP found supporters across social segments in the 2014 elections, its most loyal supporters—its traditional votebank, so to speak—have been among the dominant castes. If the BJP rolls back the “dilutions” in the Act, whether by legislation or ordinance, it would risk alienating some of these core voters, who find the Atrocities Act too harsh on the sections they belong to.

Satish Prakash, a Dalit professor and activist from Meerut College, believes the Dalits are “very angry with the BJP”. “But those who show up for the August 9 strike won’t be there just because of the anti-BJP anger,” he says. “The anger seen in the streets  on April 2 continues to simmer, but Dalits are unlikely to let themselves be swayed emotionally this time. Dalit youth no longer want the status quo. Now, they are looking for a new line of leadership.”

Interestingly, the BSP has not supported this strike call so far, nor has BAMCEF, one of the top bodies affiliated with the BSP’s ideology. BSP chief Mayawati had extended support to the April 2 Bharat bandh when its widespread scale became apparent.

The BJP would consolidate its voters if it accepts the watered-down Atrocities Act, but not accepting the claims of Dalits puts at risk the credibility of its alliance partners—this is what has got the leaders of the ‘social-justice’ parties in knots. It is also an unsustainable situation for the BJP, with 2019 elections less than a year away and ass­embly polls in two big states, Rajasthan and Madhya Pradesh, later this year.

“BJP MPs are getting interested in us since elections are near. Where were they so far?” asks Sushil Gautam of the Bhim Army. “Hundreds of Dalits arr­ested in the wake of the April 2 bandh are still in jail. Our people are angry, but I don’t think they will step out on August 9 in big numbers.”