The Union Territory Of Badminton

Saina to Sindhu, Pullela Gopichand’s academy in Hyderabad has in a decade mentored most of our top shuttlers 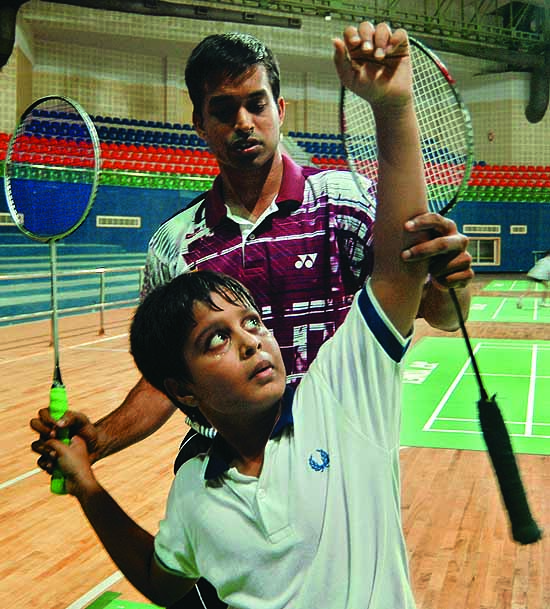 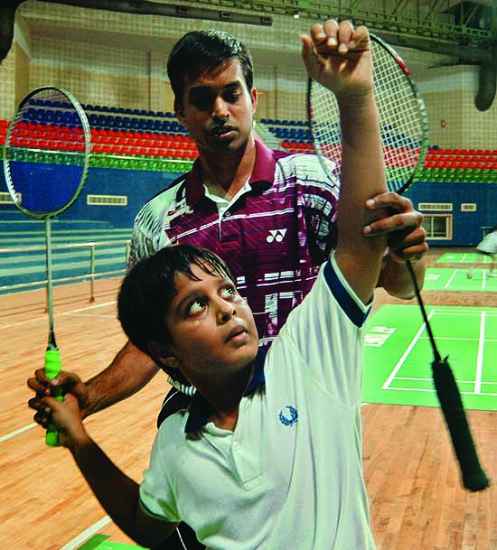 The sound of whizzing shuttles echoes in the giant hall at the Pullela Gopichand Badminton Academy. Two boys, aged 14 or so, keep leaping high in the air as they practise their smashes, stopping briefly to glance in awe as the academy’s latest champ, P.V. Sindhu, walks by. Then it’s back to the grind, nothing, not even celebrations around a World Championship medal, eats into net practice time.

The 39-year-old Gopi­ch­and, former All England Open champ and academy founder, watches from the corner of his eye, gesturing to the coach subtly. “It’s amazing. Finally, we have newspapers giving a full page to a badminton victory,” Gopichand says with a shy smile. Of late, Gopi’s academy has become a sort of ‘champ factory’, churning out a line of world-class, aggressive shuttlers. Be it world no. 4 Saina Nehwal, Sindhu (no. 12), Parupalli Kashyap (men’s no. 17) or world no. 20 Guru Sai Dutt, they are all alumni of this academy. Being a high-energy sport, badminton is often referred to as a “coach-vs-coach game” where strategies are as important as a player’s skill. While top Chinese, Indon­esian and Thai players are genetically blessed with the dexterity and stamina required for badminton, Indians have had to do a bit of reinvention.

Like Sindhu, who is 5’11” and was initially said to be “too tall” for a shuttler. Her coverage of the back of the court, especially, was sluggish. But Gopi rec­r­uited special fitness trainers to stren­g­then Sindhu’s legs and now the wea­k­ness is her greatest strength. The pleasant- mannered teen’s transfor­mation into an oncourt fig­h­ter was no magic. “There is no sho­r­tcut to success. These are the fruits of years of struggle we are seeing now,” says Gopichand with pride. 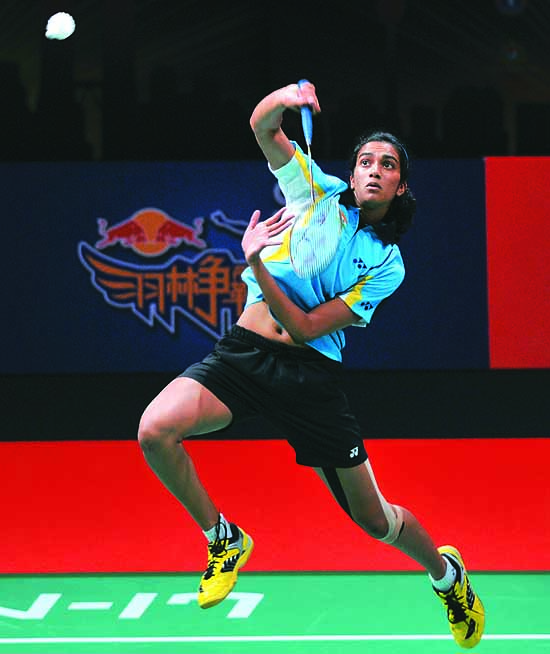 That’s true for the academy too. In 2003, then Andhra Pradesh CM Cha­n­d­rababu Naidu granted Gopi­chand five acres of land in Gachibowli to build an academy. Companies like Yonex and Navayuga chipped in to build his dream but the biggest contributor was Nim­magadda Prasad of the Matrix Group of companies. One day, over bre­akfast at the popular Hyderabad restaurant Chu­tney’s, where he was mee­ting with AP Badminton Associa­tion vice-president V. Chamundeswar­nath and Prasad, Gopi received an une­xpected gift. A cheque of Rs 2 crore from Prasad. “I remember telling Pra­sad that Gopichand would not be able to repay such a loan. Prasad told Gopi he did not expect repayment. Just a gold medal in the Olympics for India,” recollects Cham­undeswarnath. Prasad later gave Gopi­chand Rs 3 crore more for the academy. This was the seed fund for what was to become a great nursery.

“Gopi took one look at Sindhu’s game and told me, ‘Ramana, forget that she’s your daughter, from now on she’s mine....”

But even today, Gopichand admits the academy is still juggling budgets. Cat­ering to about 120 students, the mon­thly fee ranges between Rs 2,000 to Rs 15,000 (for boarders). It’s the passion to produce world-class Indian players that drives this badminton gurukul. “My Chinese coaches Wang Xiao Ming and Su Yan were tough taskmasters. They gave me the gift of discipline. That’s what I plough into the centre today and drill into all my students,” says Gopi. The academy has eight coaches now (including four from Indonesia), three physiologists, eight courts, a swimming pool, a health club, rehab and wellness centres, a running track, ice and steam bath facilities, two AC dorms, a cafeteria, jacuzzi etc. “As a player, I used to experiment with diet, technique and training. I do the same even now and try out everything,” the coach says.

Newly crowned World Cha­m­pionship bronze winner Sindhu, now 18,  came under Gopi’s wing at the age of 10. She says the best part is the coach’s emphasis on fitness and injury recovery. At one point, owing to a knee inflammation, Sindhu could not practise. So Gopi devised a diet plan to keep Sindhu’s wei­ght at 63 kg. “The best part is he tries out the diet himself first. He does not experiment on the children,” says Sin­d­hu’s father P.V. Ramana. “When we first brought Sindhu to the academy, Gopi took one look at her game and told me, ‘Ramana, forget that she is your dau­ghter. She is my daughter from now. I’ll train her’,” recollects the proud dad. Up in the air P. Kashyap almost got a Worlds medal. (Photograph by AP)

Gopi himself struggled with knee injuries for the most part of his career, which is why he places great emphasis on fitness and strength training. And it shows. Be it Saina or Sindhu, the court speed of Indian shuttlers has vastly improved. Building muscle strength and diet is as important as strategy.

Players’ training is slotted in two ses­sions, 4.30-6.00, morning and eve­n­ing. Then there are 2-3 practice sessions through the day. Gopichand himself arrives everyday at 4 am and is present till 7 pm. “No one can goof around during practice. We have to have full focus,” says Kashyap who lost his shot at a medal by one point in the recent World Championship. Kashyap’s tendency to focus on smashes at the net cost him many matches early on in his career. “Now I rally more, my defence is better and overall I play a smarter game,” the 26-year-old says. Kashyap, who was bought by Bangalore ibl team Banga Beats for $75,000, says it is an exciting time for badminton in India. “With the money and popularity coming in through bai initiative ibl, there is more recognition now. We could serve as an inspiration for others.”

“The Chinese system of identifying tal­ent early and grooming them has gai­ned acceptance among many parents in India,” says Gopichand who does a lot of work on theory, reading and devising fresh strategies. The best part about bad­minton today, he says, is the belief among the players. “This is primarily due to more facilities and exposure which players in our time lacked,” he says. Saina on her way to Olympic glory. (Photograph by PTI)

Gopi had three of his wards in the World Cup quarters this time, Sindhu, Saina and Kashyap. Saina and Kashyap had matches at the same time and the coach had to move to Saina’s court as she was unwell. After losing the match, tellingly, Kashyap said he missed his coach’s presence at courtside. It didn’t help that Saina lost too. “But I couldn’t leave Saina after she lost two games because she would have felt I had given up on her match. Hence, the quandary,” says Gopi. “This is a new issue and we are trying to make our players more independent,” he adds.

Of course, not everyone is a member of the Gopichand fan club. Doubles player Jwala Gutta has lashed out at Gopichand often, citing a conflict of interest—how could he run a private academy and also serve as national coach? “One can’t exp­ect everything to run smoothly. I just take such criticism in my stride,” says Gopichand on politics in the game. In fact, even Saina had a rift with Gopi in 2011, when she veered briefly towards veteran coach Bhaskar Babu.  But the two made up later and landed India an Olympic bronze medal in 2012. There’s also a story about how Gopi did not allow a visiting Indonesian group to take a round of his centre. “Gopi wasn’t allowed to train at the Indonesian centres during his playing days. The man does not forget a slight,” explains a senior coach.

Asked if his academy would expand to other cities soon, Gopichand says as of now he’s happy with the Hyderabad set-up. “When my players get a medal, they don’t graduate and leave. They stay on. Sindhu has about nine years, Saina 6-7 years in the game. I can’t just drop them once they’ve gotten a medal.” Parents too are willing to put in the time and money nowadays to train their wards. Both in the case of Sindhu and Saina, the parents shifted to houses closer to the academy. “Many don’t hesitate to spend Rs 30,000 a month or more on their child’s training,” says Sindhu’s dad Ramana, a former volleyball player and Arjuna awardee himself. Sindhu’s mother took leave of absence from her job at the Railways to spend more time with her daughter during the World Championship.

Twenty-year-old Sikki Reddy, a Nati­o­nal Games gold medallist, says the best part about the academy is being able to play, eat and live with other players. “Practising together and working under so many coaches has led to a dramatic improvement in my game,” she feels.

Every day, there are groups of parents lining up outside Gopichand’s office now seeking an audience and hopefully a place in the academy for their wards. Like V. Muralikrishna, who is convi­nced his 10-year-old daughter has the best parallel stroke play in Hyderabad. The aim now is to catch Gopichand’s eye and hopefully he’ll zero in on that same faculty. Meanwhile, daughter Shruti stands and surveys the gigantic courts in awe. “I will be here one day and I will win medals,” she chants with conviction.

Gopichand says it is not one dream but many that drive his sweat and toil in the academy. “I work on a day-to-day basis and just focus on giving everything my best shot. My ultimate dream, of course, is to see two Indians face each other in the Olympic finals. That way we are assured of both gold and silver,” he smiles.

Those Who Can, Teach: The Pullela Gopichand Formula