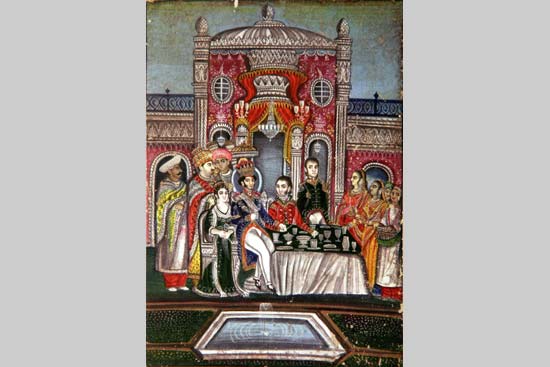 Ex-Etonian baronet and former Thatcher advisor, the author is a fully paid up member of Britain’s Tory establishment. So why exactly has he chosen to tell an almost unmitigated story of British plunder, brutality and perfidy across 19th cent­ury India? Perhaps there’s a clue in the dedication to his Indian son-in-law, the leftwing polemicist Pankaj Mishra, who was apparently his guide around the subcontinent.

The book’s central thread is the story of Mount’s colonial ancestors, whom he shares with his cousin, Prime Minister David Cameron—the Low family of Fifeshire in Scotland, and a multitude of their Shakespear and Thackeray cousins, including the famous author of Vanity Fair, all united by the web of their Indian connections. Mount draws on a rich family archive, carefully preserved by a maiden aunt. What emerges is a touching and often tragic story of the adventure and financial opportunities offered by empire, but also the perils and high mortality of life in distant tropical lands, separated by a four-month sea journey and absences of several years from children who were sent home to Britain as infants. The novelist Henry James called these colonial fortune-hunters “drops in the great bucket of the ravenous, prodigious service”, living through “the huge, hot, horrible century of English pioneership, the wheel that ground the dust for a million early graves”.

Three generations of Lows held key positions in the British Indian army and at the courts of Indian princes. We follow their fortunes from the Maratha Wars, through the conquests and annexations in which John Company swallowed the territories of its ‘subsidiary’ allies, while native princes like the Nizam paid extortionate subsidies for the dubious protection of British troops.

At the heart of this story is a great survivor, General Sir John Low, who began his Indian career in 1805 as a humble military cadet in Madras and ended in the key post of military member of the governor-general’s council half a cent­ury later. Along the way, he served as British resident at a succession of princely courts, most colourful of all the sybaritic kingdom of Oudh (Awadh), ‘the garden of India’, which the British annexed on the eve of the Mutiny.

Low’s sympathies were with the tearful Indian princes whom the British deposed and whose claims he argued with his superiors, though never at the cost of his own career. Mount paints a colourful picture of court life at Lucknow, with its palace coups, scheming begums and vazirs, ineffective but very artistic nawabs and glittering folies de grandeur.

Mount is a great story-teller, but this massive tome could have done with some ruthless editing, especially of its very detailed sieges and military campaigns. In particular, we might have been spared yet another retelling of the disastrous Afghan War of 1840 and the long Lucknow and Delhi sieges of 1857-8, which have all been amply detailed elsewhere. A more serious criticism of this book is its lack of historical context or balance in the sweeping judgements it makes, often on the basis of very flimsy evidence. For example, the British garrison is accused of ‘war crimes’ in its suppression of the Vellore Mutiny of 1806, though no such censure is applied to the mutineers’ massacring all the sick and wounded in the fort hospital. Again, the accusation of war crimes is levelled at the brilliant, imperial proconsul, Sir Stamford Raffles, during his conquest of Java, based solely on an obscure poem by the half-brother of the deposed local Sultan. Raffles gets no credit for rediscovering and rescuing Indonesia’s pre-Islamic Hindu and Buddhist heritage, then still mouldering neglected in the jungles, a lot of it now handsomely housed in the British Museum, where Mount and other scholars can study them.

Mount’s view may have been skewed by the fact that his forebears served on the military rather than the civilian side of empire. That may explain the absence of any reference to the more positive colonial innovations, such as a famously efficient and incorruptible civil service, a judicial system and new penal code fir­mly based on equality before the law, regardless of caste, religion or race, and of course English-medium schools and colleges also open to all castes.

Mount makes the surprising assertion that “British observers preferred to ignore the far-flung and hugely energetic networks of the merchant community”, believing “that the rigidities of caste prevented the emergence of anything that could be described as an Indian middle class”. But it’s Mount who ignores that rising Indian middle class in his condemnation of what he calls the ‘Whiggish’ interventionism of people like Sir William Bentinck and Thomas Macaulay. Their social and educational reforms were inspired by popular demand from that very middle class of aspirational, newly-westernised Indians, clustered around the Company’s main urban trading centres at Bombay, Calcutta and Madras. Mount’s ancestors spent little time in these cities and, perhaps because of their own gentrified pretensions, preferred mixing with rajas rather than with Indian merchants and traders.

Typically, Mount dismisses the reformist approach to India advocated by the brilliant utilitarian philosopher James Mill in his monumental History of India, on the grounds that Mill “had never visited India, knew no Indians and no Ind­ian language”. He seems to be unaware that Mill enjoyed a close friendship and intellectual camaraderie with the most outstanding Indian intellectual of his time, Raja Ram Mohun Roy, who arrived in London in the 1830s to canvass support for precisely the sort of ‘Whiggish interventionism’ that Mount so dislikes. It was that liberal interventionism by governor-general Bentinck which produced major reforms such as the abolition of Sati, which astonishingly finds not a single mention in the book.

When it comes to the Great Mutiny of 1857, Mount subscribes to the conventional Indian view that it was a war of natio­nal independence. His evidence for this, curiously enough, is, firstly, that the mutineers threw open the prisons and, secondly, that they massacred all Christians they could lay their hands on, Indian or European, men, women and children. While he details bloodthirsty British reprisals like blowing mutineers from cannons, he skims over incidents like the horrific Kanpur massacres of British women and children, which fuelled British jingoism and revenge. Nor does he explain why the overwhelming majority of Indians, and especially the new urban middle class, stayed loyal to the Raj.

Of course, Mount is right to assume that people prefer self-rule to foreign occupation. But were the British really that much more alien to the subcontinent than the often oppressive Persian, Afghan and Turkoman elites whom they supplanted? And wasn’t the justice and revenue administration of John Comp­any and later the Raj infinitely more efficient and humane than that of the vast majority of Indian princes? Surely, the very concept of India as a nation had yet to emerge out of the polite, early deliberations of that Western-educated gentlemen’s club, the Indian National Congress of the 1880s.

Ultimately, Mount’s own nostalgic tears for India’s doomed feudal order blind him to the wider historical imperatives that drove territorial expansion by the East India Company, contrary to the expressed wishes and financial constraints of its directors back home. Following the collapse of the Mughal Empire, for which the British bore no responsibility, the subcontinent had disintegrated into a battleground for competing regional warlords. It was a political vacuum which the Company would have ignored at its peril, especially when the rajas whom it preferred to prop up proved so inept at managing their own kingdoms.

(Zareer Masani is the author of Macaulay: Britain’s Liberal Imperialist)

With Some Candied Garlic