Home  »  Magazine  »  National  » UP Bypolls »  The Unease Under Those Lotus Crowns

The Unease Under Those Lotus Crowns

Losing the UP CM’s home turf has brought a rare mood to the Modi-Shah party: gloomy contemplation 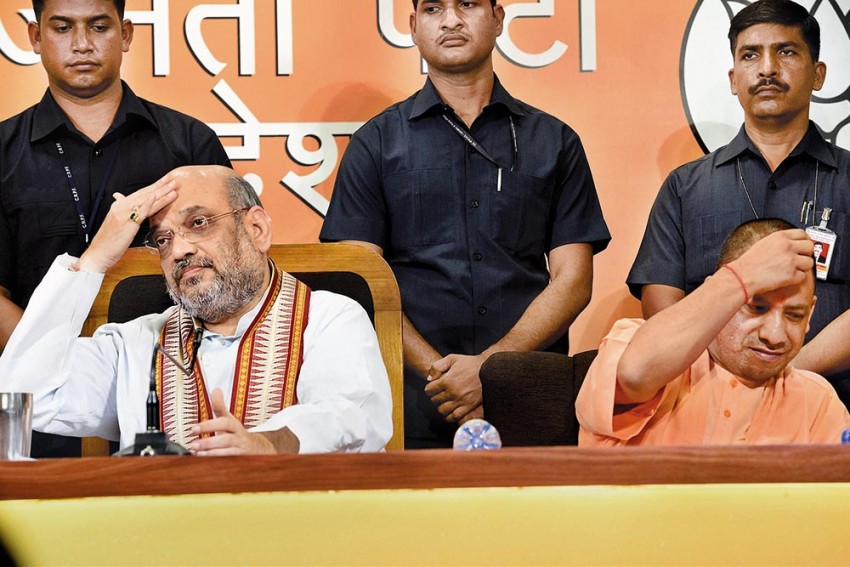 Saffron Daze
Amit Shah and Yogi Adityanath at a party meet in Lucknow
Photograph by PTI
Bhavna Vij-Aurora March 16, 2018 00:00 IST The Unease Under Those Lotus Crowns 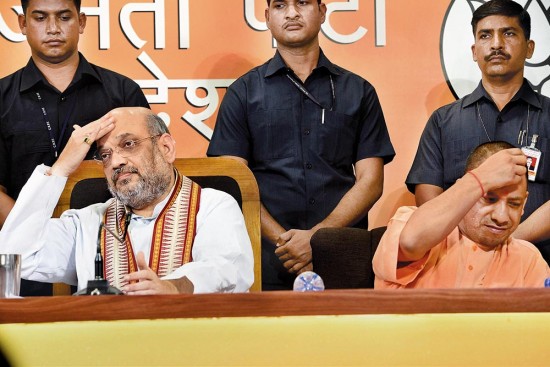 All the elation and beating of drums after the big “ideological victory” in Tripura had barely died down when the Uttar Pradesh bypoll results came along as a corrective, stunning the BJP into gloomy contemplation. Gone was the bluster that toppled Lenin’s statue and held out the threat of “ek dhakka aur” to a few more shaky state governments.

It was a chastened UP chief minister Yogi Adityanath who, responding to the news, admitted to “overconfidence” and “failure to understand the significance of the SP-BSP partnership”. For a man touted as the BJP’s star campaigner from Tripura to Kerala, it’s a humbling experience to fail to hold on to his own Gorakhpur, which he has represented for five terms over two decades in the Lok Sabha. The BJP had not lost the seat even once since 1989 when it saw fluctuating fortunes elsewhere in the state and country. The byelection in the constituency was necessitated after Yogi was handpicked to lead a 325-strong majority government in the state last year. Even as he relinquished his Lok Sabha seat, he continued to be the mahant or chief priest of the Gorakhnath mandir that wields immense clout in the region.

Phulpur was the other constituency where the BJP suffered an embarrassing loss—the degree only slightly lesser, because it was held by deputy CM Keshav Prasad Maurya. The OBC leader would often boast of having won the seat by a margin “bigger than Pandit Nehru” (Phulpur, a mix of urban and rural zones spinning off from Allahabad city, is fam­ous for having been Jawa­harlal Nehru’s constituency).

“Opposition unity against our party doesn’t look like a ­far-fetched idea ­anymore,” says a general secretary of the BJP.

The victory margin of 59,613 by which Samajwadi Party candidate Nagendra Pratap Singh Patel defeated his BJP counterpart Kaushalendra Singh Patel in Phulpur may not have broken records, but, along with the shock in Gorakhpur, it was enough to convince the saffron party that a recalibration of strategy is urgently needed, both at the state and national level, to prepare for the 2019 Lok Sabha polls.

The BJP’s Lok Sabha seats have now come down to 272, down by 10 since its historic 2014 win and the exact number needed for a simple majority. Maybe it’s not serious enough for alarm bells to ring, but it’s not a comfortable feeling, what with many of its NDA allies unhappy with the BJP. The TDP has withdrawn its ministers, and the Shiv Sena has been sore with its rival saffronite party for a while. They have 16 and 18 MPs respectively—it doesn’t mean much, but it’s the kind of time when people are looking at those numbers with new interest.

Moreover, there’s an unpleasant pattern to the way the party has lost high-visibility bypolls in Rajasthan, Madhya Pradesh and now in UP. Just before that, Gujarat was more a narrow escape than a morale-booster. And all these are its core territories. Though the win in Tripura was huge, both in numbers and in symbolism, it was marred by the toppling of Lenin’s statue and app­lauding messages on it (later deleted) by senior leaders like Ram Madhav and even Governor Tathagata Roy. The party had to launch major damage control measures after a Periyar statue was vandalised in Tamil Nadu, a state where it is trying to make inroads. And now, the spectre of two sworn enemies, the SP and the BSP, coming together to defeat the BJP in UP, ruled by a Hindutva icon. Is the sheen finally off the BJP?

“It’s time BJP leaders sit and analyse these results. The defeat in the seats represented by the CM and his deputy is significant,” says political scientist Sudha Pai, who feels this should serve as an eye-opener for the party. “The leaders have become too confident. There wasn’t even much electioneering in the run-up to the byelections. The party took it very lightly, as if its victory was a given,” she says.

Pai, who keeps a keen analytical eye on UP, has an interesting observation. She says that though the SP-BSP presented a formidable front, “perhaps even they didn’t expect to win”. That they did, Pai feels, is as much a reflection of the BJP’s growing arrogance and Yogi’s administration as the opposition front’s viability. “The death of hundreds of children in the Gorakhpur hospital is one big factor against Yogi. There is no development in the region. There are hardly any schools, no roads and no jobs. His way of controlling law and order with dubious means and encounters has not gone down well, especially in eastern UP. Also, Yogi’s Hindu Yuva Vahini has been acting as an extortionist and trouble-making force,” Pai explains.

Several BJP leaders told Outlook that even the RSS had asked Yogi to dismantle the Vahini soon after he took over as CM. The fear among RSS functionaries is that the outfit may grow as a parallel Hindutva organisation. With membership to the militia frozen since last year, the Vahini has been inactive for quite some time. “The continued pressure from RSS may have ensured its inactivity. Its existing members are smarting and waiting for action,” says a BJP leader from UP.

The results have also exposed other faultlines within the BJP. “The blatantly caste-based politics in the state is also a major issue,” adds the UP leader. “As Yogi is a Thakur, he is seen as indulging in ‘thakurvaad’ and promoting his own people. Pandits (Brahmins) are not happy. Neither are RSS cadres, who had played a crucial role in both the big victories the BJP got: in 2014 and in the assembly polls last year.”

In the run-up to the bypolls, the BJP top brass had got ground reports indi­cating all was not well. “That’s why Amit Shah went in for a Pandit candidate (Upendra Dutt Shukla) to appease the community. It was obviously too little and too late. And then the SP-BSP combine actually managed the arithmetic of combining their votebanks,” says a senior central BJP leader.

Sources say even Prime Minister Narendra Modi had expressed his displeasure at the lack of administration in UP. “The PM was very angry at reports of an accident victim’s severed leg being used as a pillow for him in Jhansi Medical College. He even ticked off state health minister Sidharth Nath Singh about it,” the central leader adds.

The party top brass is obviously unha­ppy about the way the narrative is fast changing for the BJP. Though they put on a brave face and claim two byelection results should not be seen as a verdict on the Modi government, they realise its real significance—that the results are micro-indicators of public sentiments and, if not addressed, may bolster opposition attempts to put up a strong, united and real challenge in 2019.

The central leadership had already initiated a project of course-correction, but the UP results have reinforced the sense of urgency that things cannot be taken for granted. The party has been taking cues from the ground and being responsive for some time now. One of the first major indications came when Modi tweaked GST provisions in the run-up to the Gujarat election, sensing the anger of traders.

“Then came the defeat in Ajmer and Alwar—we did a detailed analysis and are working on Rajasthan,” says a party general secretary, giving details of how the party is reacting to events with an adverse potential. “Again, when Lenin’s statue was razed and Periyar’s damaged, both the government and the party imm­ediately responded. The PM exp­ressed his strong disapproval, so did Amit Shah. Ram Madhav deleted his tweet soon after. Home minister Rajnath Singh sent a strong message. He even spoke to the Tripura Governor, asking him to exercise restraint.”

According to this general secretary, the PM was angry that just as the narrative for the BJP seemed to be changing with Tripura, some party members and workers queered the pitch with their irresponsible remarks and act­ions. “Gujarat was a close shave for us, and Ajmer-Alwar came soon after. Then the Nirav Modi controversy broke out. And now, our big win in Tripura seems to have been overshadowed by the UP results,” admits the office-bearer. “Worse, opposition unity does not seem that far-fetched now because they have realised the BJP is not invincible. The 2019 fight seems wide open.” That’s quite an admission, especially striking because gloom is not a sentiment one encounters often in the BJP during the Modi-Shah era.