The Trouble With Being Reborn

Oh, to return thus! As the papa of the nation. 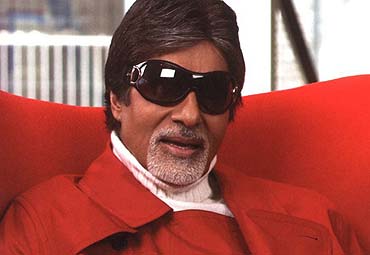 outlookindia.com
-0001-11-30T00:00:00+0553
It's difficult to conceive but in early 1995, we didn't have Outlook and we didn't have Amitabh Bachchan. The magazine world was fat, smug and fortnightly but Hindi films were doing terribly without Mr B. Then he came back and what a fall there was, my countrymen. The period between 1996 and 2000 made the lean years before his temporary 'retirement' look like the time of plenty. His fans had to watch a hollow carcass of a fifty-something star lug his way through films that would not have succeeded in the 1970s when he commanded the heights of the box office. Do you remember Mrityudaata, where the producers dragged in Daler Mehndi to shore up the sagging story of a drunken doctor on the run? Or Lal Badshah which has Manisha Koirala playing an LIC agent and Bachchan in one of his worst double roles? Or Sooryavansham which has Bachchan in love with Rachna Bannerjee (who?) but when his father (Bachchan) objects, he marries Soundarya (who?).

Which meant four years of hollow films until at four in the morning, Bachchan says, he walked across to his old friend Yash Chopra's home and asked to be rescued. So was Mohabbattein born, in which the major theme was the wooing of Amitabh by Shahrukh Khan. Before the Barchopar (Barjatya-Chopra-Johar) school of filmmaking came into being, a hero would seek out the man who had driven his beloved to her death in order to murder him. In Mohabbattein, Khan seeks out the old man to teach him the meaning of love. Coo.

The image of a man of ideals was fixed with the arrival of Kaun Banega Crorepati. With a new wig and a new white beard, Amitabh looked awful in the first few episodes. We of the media were cruel, we were dismissive but we under-estimated the space he occupied in the national heart. In a month's time, he had found his own groove. Within three months, he was offering a potted sermon at the beginning of each episode. Within six months, so we were told, the nation was tuning in to listen to this pre-digested pabulum, delivered in chaste Hindustani (whatever that is) and then tuning out again. The stuff was put into a book, Soul Curry for You and Me. His publishers, Popular Prakashan, say his take on life is unique. It is. Here is a random sample: "Lie, if you can help someone by doing so. Help your enemies. Forgive your friends. Time is a man bald-headed at the back. Seize him by his forelocks. Live your life with zest. Heed the power of words."

Amitabh the Paterfamilias of the Nation, the Master of the Non Sequitur, was born. This trope began to be seen in almost all his successful films thereafter. In Baghbaan, he was one half of a pair of amazingly lovely and dim-witted lovebirds. In Kabhi Khushi Kabhie Gham, he was even happily married to Jaya Bachchan and was happy to squash every bit of rebellion out of all those around him. When he returned to violence in Ek Ajnabee, it was almost offensive because we were getting used to him being right and rightwing. This is probably why Boom will never be released on DVD. Could we bear to watch the new Patriarch of the People getting a blow job? (Of course, another probable reason is because it was made by Kaizad Gustad who makes unbelievably bad cinema.)

To give him credit, he has allowed some deconstruction. In Viruddh, for instance, his wife, the retired schoolmarm, takes on the local hood (Sanjay Dutt) with nothing more than her cane and her waspish tongue. In Bunty aur Babli, he let himself be a bumbling police officer, exuding beedi smoke and incompetence in equal measure. And although his appearances are now becoming almost embarrassingly routine, he was probably the best thing about Kabhi Alvida Na Kehna.

But now that he is playing Bheeshma in the Mahabharata, we know it's confirmed. He is the pitamaha, the nearest thing we have to a father figure, never mind that he wears more rings than a sultan and three different types of perfume all at once.

Question: What does that make Amar Singh?

(Pinto is author of Helen: The Life and Times of an H-Bomb.)

Our Pie In The Sky