The Trek Only Starts At Amethi 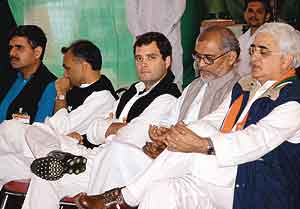 Hundreds of kilometres away from his constituency Amethi, Rahul Gandhi was not his cheerful self. In Chitrakoot last week to attend the two-day meet of the Uttar Pradesh Congress, Rahul was trying to make some sense of the greatest problem confronting the Congress—revival of the party in the state. This was the first time since he won the Lok Sabha elections from Amethi that the young Gandhi was face to face with harsh realities presented to him by the 250-odd youth leaders who had come from 71 districts in the state.

The message was clear: Rahul would have to step outside of Amethi and be more active in the other districts if the Congress was to have any chances in Uttar Pradesh. "Please come to our districts too. We are tired of the changing leadership in UPCC. There is no one to listen to our problems," was the common refrain that Rahul met with all through the two-day meet.

There was more. The young delegates kept nothing back from the heir apparent. One complaint was that there had been no change of leadership at the district level for decades and that people with vested interests continued to wield power. Some others pointed out that younger leaders need to be given more prominence if the party was to revive.

Though only 55 of the delegates were Dalits, there was much discussion of this vote-bloc moving away from the Congress. "We wanted more Dalit participation, their votes shifting has been one of our main concern," admitted UPCC chief Salman Khursheed. Sudha Pai from JNU university even dedicated one session entirely to the upsurge of the Bahujan Samaj Party. At the end of the lecture, even senior leaders were looking for a quickfix solution to the Dalit vote shift. Strangely, nobody seemed concerned about the ruling Samajwadi Party. More than anything else, the meet was an eye-opener for Rahul that he has to stay put in UP. Occasional treks to Amethi would not do.