Once Congress Supporter To Fierce Govt Defender: The Transformation Of Tushar Mehta 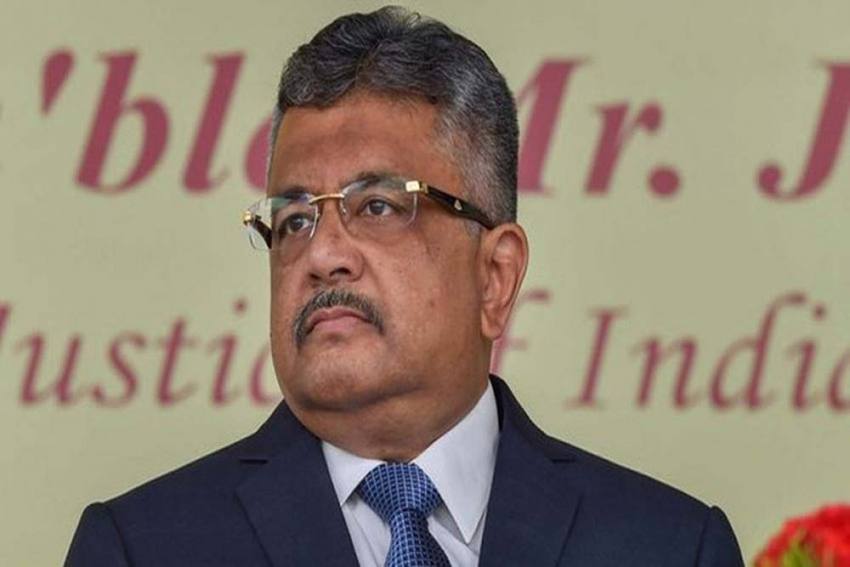 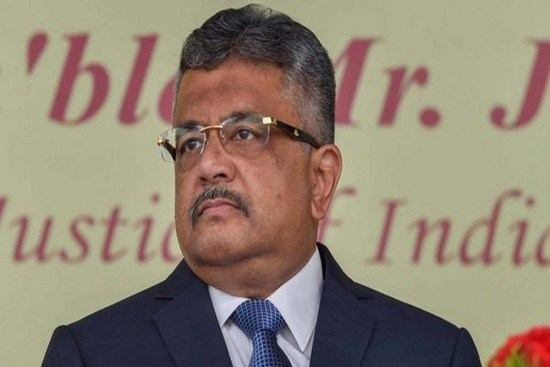 A veritable furore took hold of the national discourse last week as the country’s second highest law officer, Solicitor-General Tushar Mehta, spewed a barrage of appellatives for journalists, civil rights activists, a section of the legal fraternity and anyone critical of the Union government’s handling of the coronavirus-induced lockdown. He alluded to journalists reporting on the miseries of common Indian citizens—particularly migrant workers and the poor—as “vultures”. Rights activists, lawyers or political leaders concerned over the escalating humanitarian crisis were, according to the outburst, “armchair intellectuals” and “prophets of doom who only spread negativity, negativity and negativity”. The high courts, at least 19 of them, which have passed a slew of directives to state governments for redressing grievances of citizens, weren’t spared either. Those courts were “running like parallel governments”, Mehta said.

The SG’s tirade came during a virtual hearing by the Supreme Court’s bench of Justices Ashok Bhushan, S.K. Kaul and M.R. Shah that had taken up a suo motu reference on the problems faced by migrant workers. While the controversy stoked by Mehta’s comments was still raging, the SG landed in another storm after the Aam Aadmi Party-led Delhi government agreed to have him, and two other central law officers—Additional Solicitors-General Maninder Acharya and Aman Lekhi—as special public prosecutors representing Delhi Police in a case linked to the Northeast Delhi riots of February. The Delhi government’s acquiescence to the Centre’s choice of Mehta as counsel was singled out by chief minister Arvind Kejriwal’s critics, mainly the Congress, as evidence of the AAP being a “B Team of the BJP”.

On March 31, Mehta said “there is not a single migrant on the road”. Later, he objected to PILs demanding relief for the poor.

It is rare for law officers to become newsmakers for anything other than their courtroom adroitness. Though their appointments are made by the government of the day and are almost always credited to their proximity to top leaders of the executive, law officers seldom emerge as polarising figures. Often, after demitting office, it is difficult to even recall which party’s government they served. Or, what their individual contribution was to the government’s legal battles. The success or defeat is attributed to the government, as are the controversies that emerge during litigation. A simple test would prove the point. Mehta is the 23rd solicitor-general but how many people would recall his predecessors and the governments they served? Indeed, even a prolonged vacancy is rarely noticed, as was evident when the post of SG remained vacant for a full year between Ranjit Kumar’s resignation in October 2017 and Mehta’s appointment.

If Mehta appears to be an exception to this rule, it isn’t purely because of his recent utterances. “Unlike most of his predecessors like Ranjit Kumar, the late Goolam Vahanvati, Gopal Subramanian, Mohan Parasaran, Harish Salve, Rohinton Nariman or Soli Sorabjee, Mehta was never a big name in the legal fraternity and certainly not in Delhi. His predecessors, even less famous ones like Kirit Raval and T.R. Andhyarujina, could boast of an impressive list of clients outside of their government practice, but for Mehta, the only high-profile client affiliation is Amit Shah,” says a senior Supreme Court advocate, requesting anonymity. 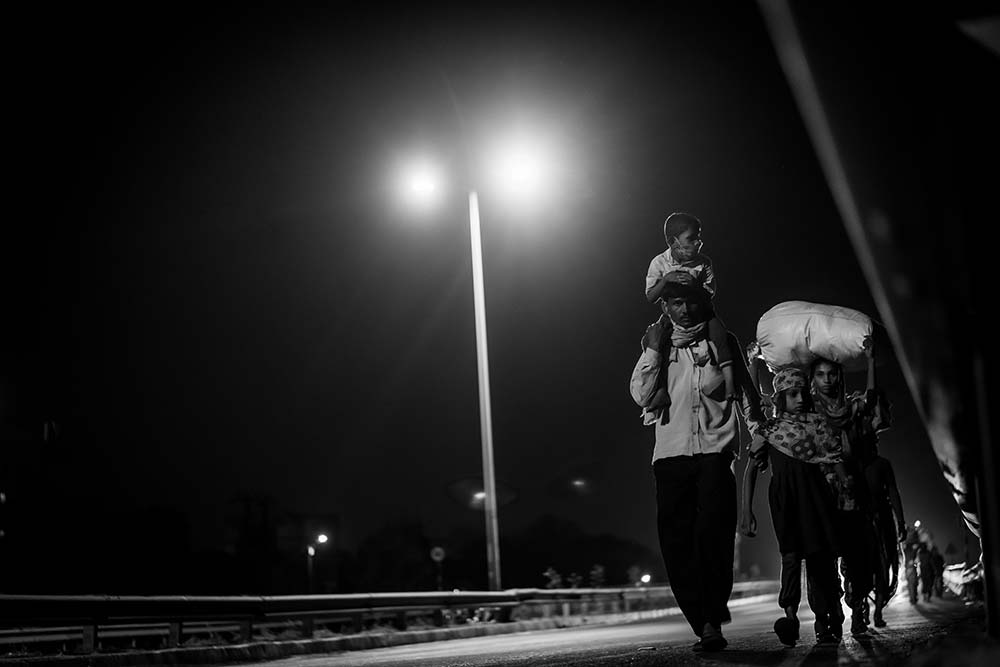 A migrant worker’s family trudges in the darkness on the Mumbai-Nashik road. Solicitor-general Tushar Mehta alluded journalists covering the migrant crisis to ‘vultures’.

So, how did a lawyer in Gujarat rise in a decade to become the country’s second highest law officer? Mehta started his legal practice in Ahmedabad in 1987. Yatin Oza, a senior advocate in the Gujarat High Court and former BJP MLA, has known Mehta for over three decades. He tells Outlook, “Tushar used to work as a junior to K.G. Vakharia, a much respected senior advocate. Sometime in 1999, there was a major litigation between groups affiliated with Congress and BJP to take control of the functioning of Ahmedabad District Cooperative Bank. Amit Shah was leading the BJP camp and wanted Vakharia saheb as counsel. Vakharia agreed to take the case after some persuasion, but told Tushar to appear for it. This was the beginning of a strong relationship between Shah and Tushar.” Shah went on to become the bank’s chairman.

“Until the ADC Bank case, Tushar was seen in the Gujarat Bar as a Congress supporter.”
Yatin Oza, Gujarat HC advocate and former BJP MLA

Mehta was designated a senior advocate at the Gujarat Bar in 2007. Soon after, he was appointed additional advocate-general of Gujarat. This was also the time that legal troubles for Shah, then home minister of Gujarat, had begun to mount with allegations over his involvement in the 2002 riots. A former law officer of Gujarat says Mehta was among the handful of lawyers who stood by Shah during those hard times. In October 2010, the SC ordered Shah to leave Gujarat in order to enable a fair trial in the cases against him (he was later cleared in all of them). “Shah moved to Delhi and Tushar followed…When the BJP came to power at the Centre in 2014, Tushar was appointed additional solicitor-general,” says Oza.

A senior Supreme Court advocate who was among the batch of ASGs appointed by the Modi government in 2014 says, “The entire legal team of the government was handpicked by the late Arun Jaitley because Modi and Shah were still new to Delhi…the only non-Jaitley man on the team was Mehta.” The senior advocate recalls that “after Mukul Rohatgi resigned as attorney-general and the solicitor-general’s post fell vacant following Kumar’s resignation, the government picked Mehta to appear in every important matter…cases against P. Chidambaram, Rohingya deportation case and constitutional matters”. Mehta’s big moment came in October 2018, when he was elevated to SG. Soon after, a controversy erupted when Mehta put in a request with the Union law ministry to appear as counsel for Jay Shah (whose father is Union home minister Amit Shah) in a defamation suit he had filed against The Wire in a Gujarat court.

Sources say Jaitley, then finance minister, had wanted then ASG Maninder Singh to be appointed to the post of SG. The government chose Mehta and Singh resigned. It is interesting and surprising, says Oza, “because until the ADC Bank case, Tushar was always recognised by his contemporaries in the Gujarat Bar as a staunch Congress supporter”.

“If a law officer uses that kind of language in court, it must be seen as a statement of the government.”
Kapil Sibal, former Union minister

Former Union minister and senior advocate Kapil Sibal sees striking similarities between the cognomens Mehta hurled at journalists, activists and others critical of the government and the acerbic attacks of right-wing forces and sympathisers on dissenters. “If a law officer stands in the court and uses the kind of language that was used, it cannot be viewed as his individual opinion but must be seen as the statement of the government,” Sibal says. As political commentators, academics and legal experts criticised Mehta for his language, the SG told a leading English daily that his statement before the top court was “twisted out of context by some vested interests” (Mehta did not respond to calls and messages from Outlook for his comment for this story). But, this wasn’t Mehta’s first rodeo. When the migrant crisis had just begun to escalate on March 31 and concerned citizens had sought judicial intervention to alleviate the problem, he had told the top court that “there is not a single migrant on the road”. A few days later, Mehta urged the top court that “professional PIL shops must be locked down”. While frivolous PILs are indeed a menace, Mehta’s comments came at a time when the apex court was hearing only matters listed as urgent and the PILs he objected to raised substantial demands for relief for the poor and marginalised during the lockdown.

Editor's Take | If Journalists Are Vultures, I'm Happy To Be A Vulture-in-Chief

Sections in the legal fraternity believe that Mehta’s vociferous defence of the Centre may be triggered by a larger goal. A former law officer says the SG could be angling for another elevation as the post of attorney-general is set to fall vacant on June 30 when the tenure of K.K. Venugopal ends. Of course, if such an elevation were to come his way it would not, in any way, break convention because several of Mehta’s predecessors have been elevated as AGs in the past. With the lockdown now in the process of being unlocked, it is expected that hearing of important constitution bench matters that had been put on the backburner by the top court since March may resume in the coming months. These cases include challenges to the abrogation of Article 370 and the controversial Citizenship (Amendment) Act, both politically sensitive matters. Would Mehta lead the government’s charge soon as the country’s highest law officer?