In covering Anna, TV seems to have shed its critical faculties 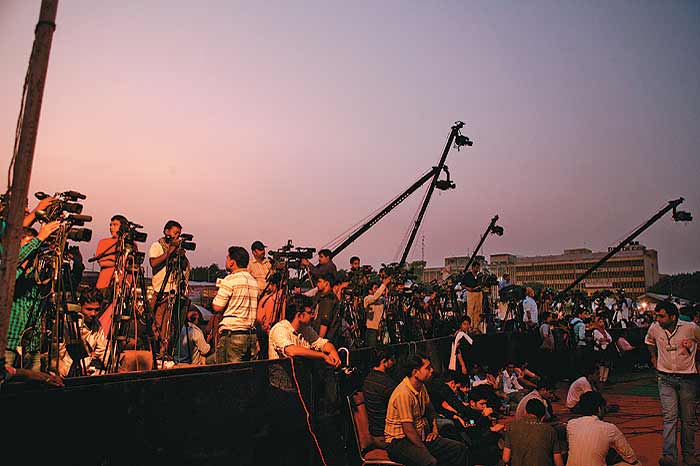 “Corruption,” I remarked the other day on a television channel, “takes more than one form.” We were talking about—what else?—the latest incremental progression in the Anna Hazare saga. “Everyone talks of money corruption, but what about the other kind—‘Power corrupts, absolute power corrupts absolutely’? And who has any kind of power now? Only two entities: Anna Hazare and television.”

That’s all I got a chance to say: the anchor swiftly changed the subject and everyone got talking of the usual arguments. A few channels do allow you to discuss the rigidity of Team Anna and its constitutional implications, but no one wants to talk about how the television medium itself is dictating what we think, what we say and when we say it.

Am I the only one disturbed at the supercharged atmosphere (almost amounting to mass hysteria) that surrounds us now on the issue of corruption? In this prevailing atmosphere, you better be for Anna Hazare completely, without any qualifications or reservations, or you will be deemed to be either for corruption or a lackey of the government. (“Your timing is terrible,” a ‘friend’ said to me after that particular television appearance, and then twisted the knife in with, “You sound like a Congress stooge.”) This mood has come about because of television’s blanket coverage of the Anna Hazare campaign, and the minuscule time given by it for the dissenting view.

No one is saying that Anna is a television creation. We have tolerated corruption at all levels for a very long time, but the multiplicity and size of recent scams, and the UPA government’s complete inability to control them so disgusted us all that we had reached bursting point. Anna was more or less the right man at the absolutely right time. He has led a campaign which has been brilliantly conceived and orchestrated by his backroom boys till now. But if his movement has now lit a fire that is seemingly out of control, the flames have been fanned by television’s hyperventilating channels.

Is it really old-fashioned to believe that the media should remain, under all circumstances, balanced and objective? In many cases, you may have to choose between good and evil. You obviously hope then that the media will be on the side of the angels. But even then, should its role continue to be of the news-gatherer, observer and analyst? Or should it be that of an activist? Everyone would want the media to be against corruption, so when a movement like Anna’s starts, you expect the media to be on that movement’s side. But do you expect it to act as the movement’s propagandist?

As far as I know, all channels, even the ones not averse to airing the occasional opposing viewpoint, joined Anna’s campaign directly. They flashed messages—and continue to do so—right through their telecasts asking viewers to support the campaign by tweeting, texting or phoning messages to designated addresses and phone numbers. In short, on the dais where Anna and his team sit, television channels are ensconced too, albeit invisibly.

This may make for exciting and—what’s the buzzword?—interactive television, but it does commit you firmly to one side of the equation, so much so that it becomes difficult to be even slightly critical. It goes without saying that Anna has started a social revolution that will change very many things for the better in the country; but it also goes—and this needs saying—that Anna and team have got so carried away with the momentum of what they started that they don’t know when (or how) to stop.

Television’s lack of objectivity has meant that really important questions are also not being discussed: like the dictatorial tendencies of Team Hazare, the flaws in the Jan Lokpal Bill, the monumental machinery required for the Lokpal agency and the difficultly in keeping it corruption-free. Television’s all-consuming obsession with the campaign has prevented it from looking at already established anti-corruption agencies and why they are not working—agencies like the CBI, CVC, ACB, the Lok Ayuktas set up in some states. No one on television is asking who will do the required investigations for the Lokpal organisation once it begins functioning. The police? Or an agency much like the police? Once you’ve said that, you’ve said it all.

But the channels won’t say it, or many of the other things that need to be said. If they did so, it just might weaken the movement, and that wouldn’t be good for trps, would it?