The Thousand Ways Of Seeing

Innocence doesn't hinder them. These kids make biting films on themes burned in their hearts. 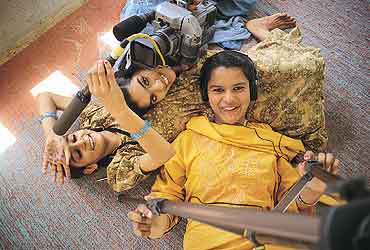 outlookindia.com
-0001-11-30T00:00:00+0553
No lights, camera, action for this film unit. Twelve-year-old Pushpa is ‘reporting live’ from a desert school camp in Rajasthan, trying to adjust her Sony Handycam on the tripod and, without a disconnect, her dupatta too. She’s making a 10-minute film on the scars child marriages leave on a girl’s psyche. She should know: like her peers in this school, Pushpa too was married—about four years ago, at the tender age of eight. The film, Balika Shivir, has been researched, scripted, planned, shot and produced by Pushpa and her team for the NGO Plan India’s ‘Children Have Something To Say’ video project.

Since 2000, Plan India has worked with over 300 poor children from across the country and has produced 36 such films. The storylines? Everything the children think concerns them: gender inequality, sexual abuse, child labour, dowry system. In June this year, Children Have Something To Say won the prestigious One World Media Award 2003 for special achievement. Says Shonu Chandra, an independent filmmaker and the soul of the project: "This project goes way beyond helping children articulate their problems. Now they are willing to become partners in their own progress."

Chandra conducts 20-day workshops for children to introduce them to all aspects of filmmaking—from encouraging them to brainstorm on issues they think is important to training them in developing effective scripts backed by sound research and teaching them the technical skills involved in filmmaking. "The last bit is a very small part of the workshops. The important thing is to find issues which affect them and then take action," says he. Agrees Arti Sinha, the child rights coordinator of Plan India: "We have to listen to children. And as adults, we must realise that children have a lot to say. These films could be a very powerful tool to sensitise other children."

Chandra calls himself a convert. "When we started the project, like so many adults, even I didn’t believe in these kids. As adults, we draw lines. In these three years, I have been forced many times to raise my own limits and do away with my mental barriers." For instance, while working on Victims of the Garbage Dump, a film on a ragpicker’s life in northeast Delhi, they found nobody in the crew could read or write. Scriptwriting became a challenge, but it was an issue close to the children’s heart: of going barefoot to the garbage dumps, fighting infections, illnesses and sullen chowkidars. By sheer persistence, they finally made the film happen.

Says 13-year-old Verish T. of Andhra Pradesh, who made a film on girl children forced to drop out of school: "My seven-year-old sister Gouramma was pulled out of school by my parents. After returning from the workshop, I couldn’t bear to see her not being allowed to go to a school." He made sure that she went back.

The crew of Addicted Innocence, a film on tobacco addiction among children, started an anti-gutkha signature campaign in Madhya Pradesh’s Sehore district, forcing authorities to ban gutkha sale near schools. Today, the crew takes pride in the fact that they have helped make all schools and colleges of the district gutkha-free.

K. Divya and her group made a film on joginis, the ‘wives’ of the village gods, and by extension, wives of the entire village. They chose Savitri as their ‘lead’: she was only 12 when she was married off to the community. Savitri is now 22, one of the thousands of joginis in Andhra Pradesh.

Says Chandra: "These children are ready to stand by what they say during the workshop once it is over. It is the commitment to the issues that’s important. The dynamics of their equation with their parents and with the community has changed and that is what we want." If you want to help, contact: Arti Sinha, Plan India, C-210, Sarvodaya Enclave, New Delhi-110017, Phone: 26968432/33/34.

'We Have The DNA To Survive"