West Nepal is a likely crucible of revolution, thanks to Maoist presence in this impoverished area 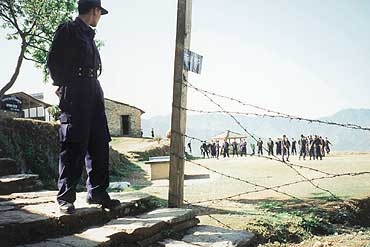 outlookindia.com
-0001-11-30T00:00:00+0553
For 15-year-old Rishi Chhetri, the future is clear. The young woman from Simle village in Rukum, Nepal's remote western district, has just got married and is a class nine student. "After that," she says, "I'm joining the Maoists, the people's war. Maybe my husband will too. We've to change this country."

Rishi is not her real name, and yet she, like everyone else in Simle, is reluctant to talk to visiting journalists. This village, and hundreds of square kilometres around it, have been Maoist-controlled for more than a year now, but the people regularly move back and forth between government and rebel-held territory. They're afraid of reprisals from a vanquished but—according to them—still vengeful police force.

Nepal's Maoists—organised under the banner of the Communist Party of Nepal (Maoist)—fired the first shots in their "people's war" in February 1996. Now they control most of five districts in west Nepal (Rukum, Jajarkot, Rolpa, Dailekh, Dolpa) and portions of many others—by some reckonings roughly half the country's area. They've attacked judges, police officers and government officials in Kathmandu. Of the nearly 2,000 people who've been killed in the past five years of fighting, around 700 have been policemen—90 of them in a single week in April, including an attack near Simle.

My journey to Maoist-controlled Rukum begins with a helicopter ride to the district headquarters, Musikot. The chopper takes us deep into the middle hills of Nepal, rugged, remote and impoverished. We touch down in a swirl of dust. Dozens of armed policemen surround the helipad, pointing their weapons down to the valleys below. The pilot laughs and points vaguely out towards the north. "Sometimes they shoot at us," he says, "Maoists. But no problem. We're hard to hit with small arms fire."

The chopper then takes off for the police post that was hit hard by the Maoists in April. The pilot is to pick up school tests for marking in Nepalganj, 120 km away on the border with India. He'd ferry the results back later in the week. There are no roads in Rukum, very few hospitals or secondary schools and no jobs outside of the family farm or the government. There are probably no more than 50 phones for the 1,55,000 of the district.

"Why do you think there are so many Maoists out there?", asks Kemman Khadka, chairman of the district development committee and a member of Nepal's largest Communist Party, the United Marxist Leninist. "Places like this are so poor, deprived and backward." He's not referring to Musikot town which, although grubby and crowded, is relatively prosperous for a Nepali hill town. The real poverty, born of remoteness and isolation, begins as soon as you leave the district headquarters.

A local human rights activist is our guide, and after just a few minutes walk, he points to distant villages and tells us that they have "people's government"—in other words, Maoist administration. Simle, where we were told to contact rebel commanders, lies on both banks of the River Bheri, about five hours walk from Musikot. We arrive just as school is letting out and we are instantly surrounded by curious students. They have obviously never seen a foreign face before—something their English-speaking teacher confirms. He also has ominous news about the local Maoist cadres.

"They left yesterday," he says, "they took their guns and went into the jungle. I don't know why." We decide to wait and see if they would come back.Local people are friendly, but say little or nothing to us. Until we meet Rishi Chhetri and her three friends in a paddy field below the village. Perhaps it is because there is no one around to listen. I think they are proud to be a part of something that takes them out of the grinding poverty and drudgery of their surroundings.

Electricity, drinking water, health posts, high schools, all these things will come when the Maoists form the government," Rishi tells us, "Till now, we've got nothing from democracy, nothing from the political parties." We ask the girls, and almost everyone else we meet subsequently, if they know anything about the theories of Mao Zedong, or the reality of his revolution in China. They don't, nor are our questions well received.

Well before dawn on the second morning in Simle, a young man bursts into the dusty loft where we are sleeping. He is clutching a cassette player and the strains of revolutionary folk songs soon have us sitting bolt upright, reaching for torches. "They aren't coming," he announces, "They are too busy to see you, there's an emergency strategy session and they can't meet you. Now what would you like for breakfast."

Our pleas for a meeting fall on deaf ears. What we didn't know then was that a fateful step had been taken in distant Kathmandu; the government had finally put together a partial consensus on sending the Royal Nepal Army into Maoist-affected areas. The King and the army chief—who had both been reluctant at first—had agreed to the plan, changing the scenario significantly.

"We have to protect people's lives and their rights," deputy prime minister Ram Chandra Poudel tells me later in the Capital. "We have to stand up for democracy and the interests of this nation. The army will be protecting a big development programme. It's about winning back hearts and minds." Another member of the governing Nepali Congress party says the military would also have a mandate to retake Maoist-held territory if the rebels resist development efforts. "It's the only way," he says.

Human rights activists aren't nearly as enthusiastic. Padma Ratna Tuladhar, who has been trying to arrange peace talks with the Maoists, has a gloomy prognosis. "An encounter between the Maoists and the army, who is to say that isn't civil war?", he asks. "First we must have dialogue. We can't risk more war."

The parliamentary opposition, the United Marxist Leninists, also oppose sending in the army. Senior military officers too are concerned about having their men to fight on their own soil against fellow citizens but the dismal failure of the poorly armed and trained police to contain the revolt is a compelling argument.

Poudel denies that the door is closed to peace talks. "It's this conflict that has kept people poor in these areas," he says, "The army is only protecting development and we're willing to have a dialogue at the same time." Analysts believe he is sincere in wanting to meet the rebels and try for a peaceful solution, but his government is divided. So, the talks remain in limbo.

"No one thinks that Maoists can take over the country militarily," says a foreign diplomat in Kathmandu, "But they have far more than just nuisance value. And the parliamentary communist parties are tacitly supporting them. The jury is out on this army deployment. Much depends on how it's handled."

Back in Musikot, we finally meet a Maoist, or at least a knowledgeable revolutionary communist who backs the rebels.Lokendra Bisht has spent the past six years in Musikot's ramshackle jail, convicted of killing a member of the Nepali Congress party. Other prisoners refer to him in hushed tones as "Bisht Uncle". He is one of the few to speak frankly to us in all of Rukum, and his words are chilling.

"Even if they kill all of the Maoists," he says, punching his fist through the bars of his cell, "more will come along. This revolution began because of government brutality. More violence will make it stronger."

The tough talk on all sides is fuelling pessimism in Nepal. The next few months will be crucial if insurgency is not to become a civil war.