With the court ordering status quo on Ayodhya, the Sangh may return to agitational politics Updates 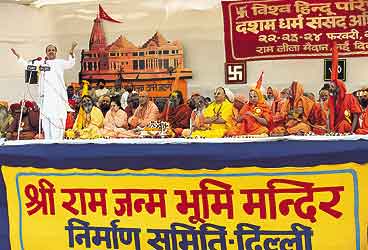 outlookindia.com
-0001-11-30T00:00:00+0553
Where does the Sangh parivar go from here? Last week's Supreme Court rebuff to the Union government—its second in the last one year—closed all doors to any legal shortcuts in the Ayodhya dispute. The court categorically turned down the government plea to hand over the 67 acres of 'undisputed' land in Ayodhya to the Ram Janmabhoomi Nyas for supposed religious activities. It specifically cited the necessity to "maintain communal harmony" in turning down the plea. The court, therefore, held that status quo was vital till the Allahabad High Court disposed of the title suits.

The vhp and the rest of the Sangh parivar is incensed. With the case mired in endless litigation and a political settlement farther away than ever, the parivar says it has only two options: either launch an agitation or push the government into going in for a legislation empowering it to hand over the undisputed land to the Ram Janmabhoomi Nyas. Says rss spokesman Ram Madhav: "While the court verdict was disappointing, the parivar—particularly the vhp—will create an atmosphere to enact a legislation."

Indications of what may follow was given by hardliners in the Sangh fraternity. Saffron strongman Praveen Togadia told Outlook: "The battle will now be taken to the streets. We'll carry out a signature campaign by political parties. Those who refuse will be wiped out in the next elections." The vhp's Ashok Singhal grabbed the opportunity to up the ante: "The court decision is Ram's blessing in disguise. We now want not just the undisputed site but the disputed one as well. A people's movement will be launched." There were other threatening voices too. "If Muslims want to buy peace and social harmony, they have to respect the sentiments of the Hindus," Acharya Giriraj Kishore, vhp leader, warned.

If the court ruling surprised the government, it didn't reflect in its public posturing that followed the verdict. Union law minister Arun Jaitley told journalists the government was duty-bound to follow the apex court. In reality, there's a good chance it could pave the way for a larger political agitation on the issue in the light of assembly elections later this year and the impending general elections in 2004. The BJP's Mukhtar Abbas Naqvi was vague: "The government wanted an early settlement and for the sake of communal harmony, the issue should be decided at the earliest."

Sure, everybody wants an

early settlement. The question is how does one arrive at it? Privately, BJP leaders admit the only option left is either to move a special leave petition (SLP) before the apex court asking for a revision, or introduce a fresh legislation. As far as moving an SLP is concerned, there is the fear that in the light of the categorical 'no' by the SC, it may not be too prudent to press the point again.

And as for legislation, without the support of its own allies in the Lok Sabha and not enough numbers in the Rajya Sabha, a contentious law to hand over the undisputed land to one of the claimants would certainly be defeated.

The BJP could eke out an advantage from this flux; it gives them space to again project Ayodhya as a poll mascot. "The construction of the Ram mandir may well figure in our election manifesto," a top BJP leader told Outlook, adding: "The NDA's common minimum programme is limited to governance and each political party is free to decide its own political agenda." BJP strategists are of the view that the party needs to have an independent political agenda and the court verdict last week seems to have given them a chance to attempt something that they have been anxious to do.

There's near unanimity among legal experts that the court verdict was sound. Says senior advocate Ashok Desai: "The Supreme Court's decision on the land in Ayodhya should not be regarded as a victory or defeat for any group or community.In spite of all the sound and fury, the case pending before the Allahabad High Court is essentially an inquiry into the origin and history of the structure. One must appreciate that the Supreme Court has maintained the status quo till there is a judicial determination on the conflicting stands." Agrees Anil Divan, senior attorney: "It is a correct judgement. The SC order gives enormous flexibility for a judicial settlement."

The point is whether political parties—more specifically the BJP—are willing to wait for the verdict. Congress spokesman Abhishek Singhvi, himself a legal expert, says the government isn't willing to learn a lesson. The court ruling, he adds, has "put paid to this government's deliberate and mischievous attempts to move application after application to seek some non-existent clarifications". The cpi's central secretariat notes the attempt to refer matters to the Supreme Court was aimed at "backing up and fuelling VHP demands" and the government has no option but to go by the verdict.

There are clear signs that by the time April is over, a political line on the temple issue will emerge from within the Sangh. While the BJP may include it in its manifesto, a more significant meeting is expected at the Ram Janmabhoomi Mandir Nirman Andolan's 'ucchadikhar samiti' in Ayodhya on April 29-30. A high-powered body will decide on the 'future course of action'—a euphemism for going on the warpath. Equally, there's little doubt that in the absence of either a court verdict or a political settlement, the construction of the Ram mandir is an issue too tempting for the BJP to let go of.