Magsaysay award winner Bezwada Wilson, in the wake of Ghazipur landfill tragedy, talks about the civic scenario and why, as a nation, have failed to deal with sanitation in a scientific manner... 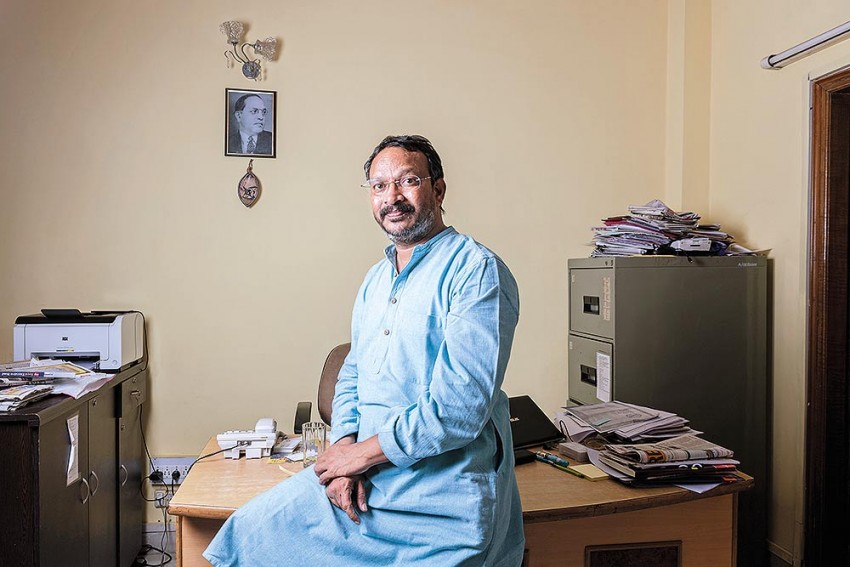 Photograph by Narendra Bisht
Giridhar Jha September 14, 2017 00:00 IST ‘The Tech’s There, Not The Political Will’ 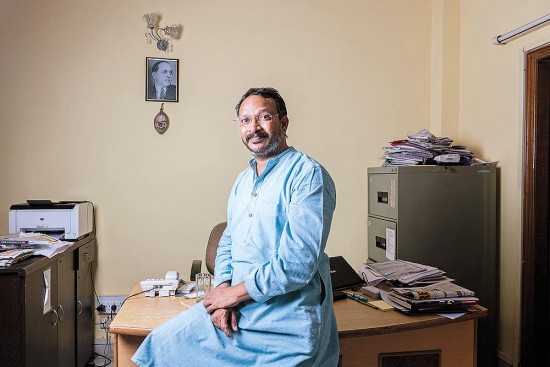 Magsaysay award winner Bezwada ­Wilson has been at the forefront of a spirited campaign for many years, working relentlessly for the total eradication of manual scavenging in the country. In conversation with Giridhar Jha after the recent landfill tragedy at Ghazipur in Delhi, the 51-year-old crusader talks about the civic scenario, death of sanitary workers, the prime minister’s pet Swachh Bharat campaign and the reasons why we, as a nation, have failed to deal with sanitation in a scientific manner.

A doctor died recently in Mumbai after falling into an open manhole in a floo­ded street. In Delhi, two commuters lost their lives under an avalanche of garbage at the Ghazipur landfill. Isn’t it an alarming situation in urban India?

Garbage disposal is a big issue and an inc­ident like Ghazipur was just waiting to happen. We can reuse the waste. When you quiz the authorities, they say they are using the Japanese technology to make electricity out of it, but actually they are not addressing the issue at all. The heaps of trash keep getting bigger by the day. Millions of people produce garbage every day, but they don’t know how to deal with it. They have to set up a separate research and development unit on garbage disposal, but all they are doing now is to find out ways to avoid payment of ex-gratia of Rs 10 lakh to those killed at Ghazipur or in other mishaps. Instead of preventing loss of human lives, they want to shift the onus onto the contractors. How can a democratically elected government and a welfare state even think of doing that? There is a scientific way of tackling manholes. The government, as their principal owner, cannot afford to have an escapist attitude when it comes to such issues.

Death of sanitary workers inside sewers has become a routine affair…

We have made a list of 754 people, including 84 in Delhi, who died while working in sewerage lines and septic tanks across the country. Ten persons died within 34 days in the national capital alone. Can you imagine what would have happened had 10 cows died in Delhi? Everybody would have risen to wear their nationalism on their sleeves. But when Dalit workers die in the national capital, ­nobody issues a statement. This criminal silence must be broken. After all, all lives matter, including the lives of Dalits. The prime minister must hold an emergency meeting with the chief ministers to take stock of the situation and declare when they are going to stop the killings of civic workers in septic and sewer lines. Mere statements, as in the case of the Ghazipur mishap, will not suffice.

Why do you think the situation has come to such a pass?

The problem with the Indian civil soci­ety is that we have started calling it a civil society without it being civilised. Instead of learning new things, we live in the past, always glorifying it by saying that nobody else in the world had drains like we had in Harappa or Mohenjodaro. Modern society requires so many things to develop and adapt, particularly when it comes to sanitation. But the problem is that civic bodies, like Indian society in general, are beset with a casteist mindset. Since civic service providers are all from an untouchable community, others have stopped bothering about sanitation. They think the job of cleanliness has been allotted to a particular community, which will manage it.

Why is it so different in the West?

The traditional notion in our society is that Lakshmi (wealth) keeps away from ‘impure’ places. That is why toilets are eit­her built outside the house or we defecate in the open. In other parts of the world, people developed their own mechanism of how to deal with it in a sensitive and humane manner, without hurting or creating problems for others. They did not assign the scavenging job to a particular community. In India, on the other hand, each caste is supposed to do one work. So Dalits have to do the scavenging work and the rest of the soc­iety stops worrying about it. That is a major problem. Also, scavenging is linked with caste, but there is no mechanism or political will to break that link. Cleaning somebody’s excreta is a punishable crime in the country, but there is no political will to resolve this pro­blem. It is not as though the people in power cannot understand it; they act­ually do not want to understand it. Nobody talks about it openly. So whenever any issue related to sanitation comes up, they immediate think of one particular community to take care of it.

Isn’t the situation changing now? Cleanliness, after all, is quite high on this government’s agenda.

The Swachh Bharat cam­paign is like magic—nothing really happens. Swachh (clean) and Bharat are actually two ­antithetical terms. This campaign is all about constructing new toilets, but has nothing to do with the existing ones. At the very outset, we realised it did not aim to eradicate manual scavenging or sewage and septic tank fatalities. They have planned to build 21 crore new ­toilets by 2019, which would only add to the burden on the scavengers. Sometimes a top bureaucrat enters a waterless pit built with an advanced ecosystem to tell the media that no smell emanates from there. But can a bureaucrat go anywhere close to those sewerage lines or septic tanks where people are dying while cleaning them? They must stop the drama and ref­rain from saying things that are not true. If a ­senior officer is doing something like that, one can imagine how the government mission is progressing.

The government has set an ambitious deadline to rid the country of the scourge of open defecation.

To tell you the truth, the government is merely announcing new schemes. It has set the deadline of 2019 to rid India of open defecation and is spending a whopping Rs 2 lakh crore on the construction of new toilets. But it has earmarked only Rs 5 crore in this year’s budget for rehabilitation of women scavengers. The government has also allocated Rs 30,000 crore to invest in its bullet train project and has set a deadline for its completion, which I am sure will be met. But it cannot fix a deadline to end manual scavenging. Manual scavenging is still going on in Uttar Pradesh, Madhya Pradesh, Bihar, Rajasthan, Gujarat, Uttarakhand, Jammu & Kashmir and a few parts of Jharkhand. After three years of the Swachh Bharat campaign, 1.6 lakh women are still engaged in manual scavenging. The courts pass orders, but it is for the government to enforce them. The government, how­ever, will never do it because then somebody in the system has to be punished. If at all anybody is punished, it has to be the scavengers. Somebody has to say they have been wronged over the centuries. They need to ­admit they have committed blunders and offer apologies to the Dalits. That is not happening.

We are also coming up with smart cities across the country.

Yes, we have reached the next level of urban centres with the concept of smart cities, but not smart sanitation yet. Sanitation has to keep pace with the ­rapid urbanisation in the country. We have graduated from one-storied houses to high-rises comprising 100 floors, but we never bother to think about how to treat our excreta. We just flush it down the commode and are so happy to do that. Nobody thinks about what happens next. Today, no company or shopping mall manages their own sewage system. The government also does not have a proper faecal sludge management policy of its own. Some departments under the urban development ministry just download some documents and distribute them everywhere, but we do not know what is actually being done to tackle the civic mess arising out of such a situation.

What do you think of the civic situation in Delhi, in particular?

Delhi has 7,000-km-long sewer lines, but there is no proper, mechanised way of managing them. The national capital produces waste up to 4,500 million ­litre per day (MLD), but it has a capacity of treating only 1,600 MLD in a day. It means we are dumping altogether 3,000 MLD of muck and filth into the Yamuna or in places like Ghazipur. There are only 17 sewage treatment plants in Delhi, which never work to their optimum cap­acity. That two workers recently died within its sewage plants shows they have not been des­igned in an advanced manner where human involvement for managing them is not required. Just imagine, a country that has launched missiles of 4,500-km range and also 104 satellites at one go simply does not have the capacity or the equipment to go five to 10 feet below our noses to clean sewer and septic tanks properly.

What is preventing them from making use of the latest technologies to manage the sewage lines?

When we have the cap­acity to run Metro trains through a tunnel without shaking Connaught Place in Delhi, why can’t we opt for proper technology for maintaining the sewage lines? Why should we send human beings down into the sewage lines, which are 20 feet deep at many places? How can we even think of sending somebody inside? It is criminal. That workforce can be eng­aged in other activities. All we need is a mechanised system to be put in place for taking out the muck. For that, we don’t even need to invent new technology. It is already there; we only need to use it in keeping with the local requirements.

Man On The 37th Floor