Just when it seemed the ghosts of American scholar James W. Laine's controversial book on Shivaji had been buried, comes a state ban on another book by the same author. 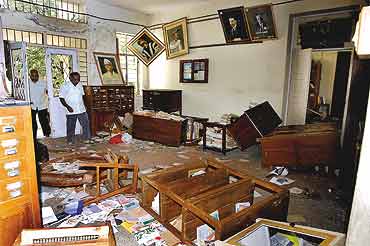 outlookindia.com
-0001-11-30T00:00:00+0553
Just when it seemed the ghosts of American scholar James W. Laine’s controversial book on Shivaji had been buried, comes a state ban on another book by the same author. Curiously, The Epic of Shivaji was published by Orient Longman in 2001, two years before Laine’s Shivaji: Hindu King in Islamic India triggered a public outcry here, including an attack on the Bhandarkar Oriental Research Institute, Pune, in January ’04. The objections were over certain references in the book about Shivaji’s parentage. Now, four uneventful years after the 386-page translation of Sivabharata, a classical Sanskrit poem composed by the Maratha warrior king’s court poet Kavindra Paramananda first hit the stands, the 32-page introductory study by Laine seems a law and order risk. They say it contains "derogatory remarks" about Shivaji and "could spark off social instability".

In 2004, the state had registered offences against Laine for inflammatory writing. Deputy CM R.R. Patil had even vowed to seek Interpol’s assistance to get the Minnesota-based professor of religious studies deported to India for legal action. In November ’05, lawyer P.N. Godge, representing Shivaji’s descendant Udayanraje Bhosale, had met Patil to secure a ban on The Epic.... Following an official scrutiny of the contents, the NCP-held home ministry clamped a ban without so much as a cabinet discussion.

Laine feels the use of the word ‘oedipal’, referring to father-son conflict in folklore accounts, may have provoked the ban. "In both books, my interest was not so much the historical Shivaji as the literary portrayal of Shivaji," he told Outlook. "Most of the controversy associated with the other book came because of the historical arguments I made... whereas I was really interested in the way the story was told." Laine seems fed up, Maharashtra is no longer in his ambit, he says. "But," he adds, "I have an abiding interest in India and will work on broader issues in the future."