The Sweet Spot On The blade 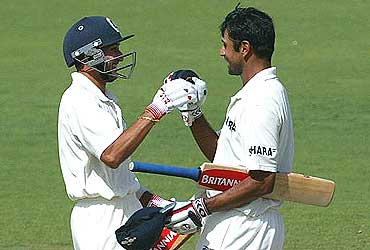 Rahul Dravid's epic performance in the Adelaide Test could be seen as a match-winning solo, or a symbol of something bigger, depending on your perspective. Perchance it is the signal of a possible turnaround in India's sporting ethos?

His resolute batsmanship left the cocky Australians gasping for breath and adjectives, but in a wider frame of reference, Dravid's achievement was not only about cricket. In many ways, it was symptomatic of the Emerging India, fuelled by ambition, willing to compete with the world as equals and seeking to be defined by success.

Maybe one reads too much into it, but this was a different kind of year for sports in India. There was remarkable success almost through the 12 months, and this wasn't restricted to one sport but spread across various disciplines. Cricket remained the predominant game, of course, but for the first time in 55 years, media managers were compelled to surrender headline space and prime time to other sports and stars.

In shooting, in tennis, in athletics, in snooker and billiards, in chess, in golf—India's performers hit the high notes at the international level consistently enough to suggest an upheaval of the old, pusillanimous mindset.

Anjali Bhagwat, Abhinav Bindra, Pankaj Advani, Arjun Atwal and Sania Mirza, to name a few, not only captured the imagination of a nation starved of sporting glory, but signalled a new attitude. Even as the entire country prayed for the speedy recovery of Leander Paes, Indian sports' Gen X had arrived.

Then there was the resurgence of hockey, as the Indian team, with veteran Dhanraj Pillay in the vanguard and a support cast of ebullient youngsters won three titles and millions of hearts. A famous win over Pakistan in the Asia Cup final and a place in next year's Olympics was just reward for some passionate playmaking.

More significantly, for perhaps the first time, corporate houses and sponsors began chasing non-cricketers. And if none of those mentioned above could quite command the price of a Tendulkar, Dravid or Ganguly, they did not quite feel unwanted.

India was finally waking up to acknowledging talent. If in this delightful melee of achievements cricket could still hold its own, it was because of two spectacular runs—in the World Cup in the first quarter, and Down Under in the last month when the team showed it had the potential to beat the best.

The World Cup was transformed from a nightmare into a dream, Sachin Tendulkar, with great support from the entire team, leading the charge with some awesome batting that reached its acme in the game against Pakistan. Even a rampaging Tendulkar, however, could not stop the Australian juggernaut in the final.

The next few months were spent in idleness, and then in the doldrums, as India failed to beat an innocuous Kiwi side at home and were clobbered once again by Australia at home. Did India have a hope in hell when they went Down Under? At about this time, the Abhijit Kale controversy broke, with selectors Kiran More and Pronob Roy accusing the high-scoring first-class batsman of trying to bribe them for a place in the India A side. The rot found an echo in the team's dismal performances in the couple of first class games before the first Test as well. Aficionados predicted a 0-4 whitewash. Kinder elements agreed a 0-2 scoreline would be respectable. But once the Test series started, all such prognostications went haywire.

Rain did rob much of the playtime to facilitate a result, but the skipper Ganguly-led fightback—with an aggressive hundred and some verbal counterpunches—disallowed the Aussies any psychological advantage. With the coming of age of Zaheer Khan and Ajit Agarkar as fast bowlers, India now had an arsenal to take the fight on to the field too.

Rahul Dravid—with brilliant support from V.V.S. Laxman and Ajit Agarkar— then capped the year with the performance of the decade. He batted so flawlessly for so long, he simply frustrated the Aussies to their doom. Only twice before in cricket's history had a side chasing a 500-plus first innings score gone on to win a Test. Australia were now under pressure to salvage pride.

Dravid's batsmanship was of such pedigree that his entry into the pantheon of greats is now undeniable. But as mentioned, this performance can be seen as only as winning a Test match, or hopefully the harbinger of a true sports ethos in the country. In a myriad ways, India was on a roll in circa 2003. In many ways sports, well, rocked too.
(Ayaz Memon is national sports editor, TOI)

LOOKAHEAD
Clearvoyance ! Coming Up Next