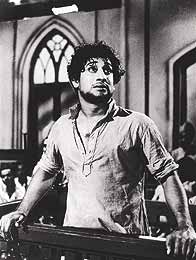 outlookindia.com
-0001-11-30T00:00:00+0553
Sivaji saab is the genetic code embedded in every Tamil actor. Even if we try to be independent, the dna imprint remains. For 48 years, Tamils have been under the spell of Sivaji. He had a large heart—that was his medical problem too. We had almost given up on him in 1993 when the doctors gave him just two years. We took him to France, did everything we could. He survived his heart ailment for 15 years. But for his ill-health, he would have been active even in the last four years.

Sivaji was style personified—he would not take it off like a shirt. He slept in style; woke up in style; came to work in style. He was style. He was the trendsetter. And I'm proud to be his descendant.

My association with him dates back to my childhood. I was about four years old when we met in the studios. Once, he even said how I might have sat on his lap more than his children. He would always be in the studios then. I was the vidushak who would be made to recite Sivaji sir's dialogues on the sets.

Sivakumar, a fellow-actor, and I used to have sessions where we competed over narrating his dialogues. We would compete over who remembered more. That's the kind of effect he has. Even for the present generation, Sivaji is the man. Upcoming artists are told, "Become an actor like Sivaji." Even for my children, he is the ultimate.

As for criticism that Sivaji overacted or was loud, why don't these westernised critics look at Akira Kurosawa's films? We have a certain style that is rooted here. We have either actors or non-actors. The Japanese never compromised to suit European tastes and I respect them. So much so that Hollywood went on to adapt/remake Japanese films. This is part of an Asian aesthetic. Sivaji too has to be translated for a western audience.

For that matter, even the early Chaplin was "loud". And so were Hollywood stars of the early black-and-white era. We are more willing to learn and try hard to appreciate an Elvis Presley but not our own icons. If Elvis spawned a thousand clones in the West, so did Sivaji here. He is our Elvis. He is the King.

Now, an Indian funeral is itself so different—there's so much emotion, so many tears, such drama. A European funeral is such a contrast. There's great restraint. Even the sorrow is muted. Sivaji's acting is as much a part of our culture. But see how Sivaji in Thevar Magan turns a new leaf. Here, the actor steps out of his era. And Thevar Magan was my kind of salute to a doyen.

Personally, I can't be critical of Sivaji sir. I have been so close to him and such an admirer, I cannot be alive to his faults, if any. I lose my critical faculties. He's been a goading force, other than a guiding force. I am utterly biased about him and there's no scholar left in me. Sivaji has been such a challenge that it makes an actor ask himself, "What's the use of being born after him?" With Sivaji, you touch base.

The only thing Sivaji perhaps regretted was that he was not well-read like me. He lacked the vocabulary, he felt. That was his modesty. "I'm just a school dropout," he once said at a function. On the other hand, I have the dubious distinction of having uttered dialogues, even reciting poetry, in Telugu, Malayalam and other tongues. But I cannot read any of these languages. Whereas Sivaji was the master when it came to Tamil. Nobody could match up to him. Once, when I was a child actor, I could not pronounce arisi (Tamil for rice) correctly and he would intone it like me and make fun. He was the master of Tamil diction.

As a politician, Sivaji failed. He was too straightforward. He never asked for favours, and was not clever or even wise in politics. Sivaji behaved like a king even in politics. I differed with Sivaji's political beliefs, but that would not in any way lessen my regard for him. And whatever their political differences, Karunanidhi and Sivaji made for a great artistic duo. (Karunanidhi scripted Sivaji's debut film Parasakthi and many more.) If one was the mind, the other was the voice.

The irony is Sivaji gave me an opportunity to rehearse the death scene in real life. After Thevar Magan, where we did a death scene, I received news from Singapore that he had passed away during a function there. I was so shaken and went through such emotions, and I was only a happy fool the next morning to realise that the news was wrong. But this time it was for real.

(The writer is a renowned actor and filmmaker)

A Slice Of Pizzazz