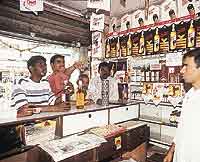 Who isn’t aware of Kerala chief minister A.K. Antony’s unflinchingly puritan notions when it comes to alcohol and prohibition? So, it was quite a shock when he decided to give the state’s stringent liquor policy a liberal spin.

Antony’s UDF government has angered the Kerala Catholic Bishops Council (KCBC) with its decision to increase the number of toddy shops in the state and issue more bar licences. The KCBC, which met recently to plan a statewide stir against the move, has even invited the Jamat-e-Islami to join their campaign.

For Antony, the turnaround is political. His uncompromising position on prohibition had given him more headaches than he bargained for. The liquor lobby’s clout has had its way.