The State of Ears

An ordinance to legalise tapping evokes a sharp outcry 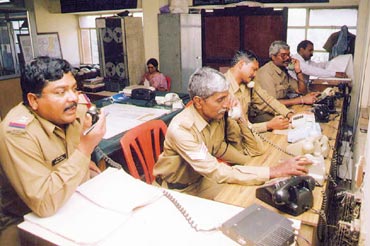 Efforts to legalise tapping of telephones and electronic communication systems in Andhra Pradesh by the Chandrababu Naidu government has stirred a hornet's nest. The entire Opposition is up in arms against the move to bring in the AP Prevention and Control of Organised Crime Ordinance. It fears the draconian law will be misused and that the state could use it as a weapon against political rivals. Despite criticism, the state cabinet last week gave its nod to the draft ordinance which is being sent to the Centre for clearance.

What really makes Naidu's proposed ordinance more suspicious is the cabinet's decision to send the draft directly to the Centre without any discussion with the Opposition—in the assembly or outside. With the elections to panchayati raj bodies around the corner, many Opposition leaders suspect that Naidu will tap phones to keep track of his opponents and their strategies as well as harass political rivals. Incidentally, poll pundits have predicted a poor showing for the ruling tdp in the elections.

Indeed, the cpi and cpm, who are chalking out joint strategies with the Congress against the tdp, accuse Naidu of ulterior motives. Alleges Suravaram Sudhakar Reddy of the cpi, "After tasting some success in taming left-wing extremism in the state, Naidu seems to have set his eyes now on genuine Opposition parties by ostensibly bringing in an act to curb the activities of the mafia." Civil liberties activists too find no logic in the government's proposed ordinance. Their view is that there are already enough laws in place to curb crime. Says a sarcastic K.G. Kannabiran, well-known lawyer and president of People's Union of Civil Liberties (pucl), "How can the government justify the ordinance when there are so many laws to curb so-called crimes like land-grabbing and contract killings?" Acts like the Prevention of Anti-Social and Hazardous Activities, Prevention of Dangerous Activities of Drug Offenders and Land-Grabbers, are some of the laws he feels are already severe enough. By proposing another law, the government, he says, is only acknowledging its failure to contain crime through the existent laws.

There are also no takers for the government's argument that the law is only meant to curb the activities of anti-social elements. Says home minister T. Devender, "Believe me, it's not to meant to intrude into anyone's privacy. We have taken adequate measures while drafting the ordinance." He claims there will be a multi-layer checking mechanism before clearance would be granted for tapping a phone. For example, he says, the concerned SP will submit a proposal to the director-general of police, who in turn, after satisfying himself on the need to give permission, will forward the request to the principal secretary, Home.

But Congress spokesperson K. Rosaiah is unwilling to believe the ordinance won't be misused. Asks he, "Who does Naidu want to fool? Hasn't his government earned the dubious reputation of eliminating its opponents? Is it not a fact that hundreds of Congress workers were killed during the last four years in the faction-ridden Rayalaseema region and elsewhere? Hasn't the Naidu government packed off upright police officials while rewarding all those who toe his diktats?" Rosaiah too fears the tapping ordinance is Naidu's move to get at his rivals.

As regards the crime prevention scene, the state police has a poor track record when it comes to convictions in cases registered by it. According to available statistics, of the 10,32,702 cases registered during the last 10 years in the state, 2,33,590 cases were not disposed of in the courts during the year of booking of the case. Of the cases that were disposed, the percentage of acquittal or dismissals are more than double the convictions. Out of the 7,99,112 cases that were disposed of in various courts, there were convictions in only 2,38,761 cases, while in the others, either the case was dismissed or the accused acquitted. The Opposition claims the police, acting on the instructions of their political masters, has been quick to effect arrests and file chargesheets, but without sufficient evidence. They also argue that Naidu has a history of using the police force to take on rivals.

That's precisely why they are apprehensive of the new ordinance. The feeling here is that the new repressive law could now well become an issue in the local elections, what with the government saying that it'll push through the ordinance. In all, the state looks set to add to its repertoire of harsh legislation.