The Sponge Is Animated

The party's over, it's crunch time now on loans. Will the Indian consumer go under? 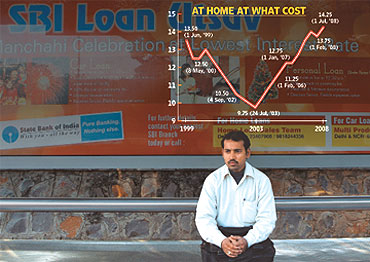 Investing in that dream flat, going in for that first car? Well, if you are part of the 300-million-strong Indian middle class like Nand Kishore, an office accountant in the national capital, you are by now straining under what they call the heavy heart syndrome. Kishore has put off plans to buy an LIG flat in nearby Ghaziabad (UP) as housing loan rates have been hiked—again. Bank interest rates for auto and home loans are now the highest in a decade, going up to 14.25 per cent. For those already "committed" to the EMI cycle, every increase in interest rate over the last two years has meant readjustments in the family kitty. Salary increments, needless to say, have not kept pace with the higher outgoes. Kapil Wadhawan, MD of Dewan Housing Finance Ltd, though, is still in a positive frame of mind. "We aren't really seeing a doomsday scenario even though there's an increase in EMIs for the borrower."

Now, one reason cited is that the focus is back on actual home loan users, and not the investor class looking to book profits through a second or third house. It's apparently the latter's opting out of the market which has led to the current low demand for properties. In this situation, the question is: will the government's attempt to rein in inflation through higher interest rates work to the benefit of the common man?

Renu Sud Karnad, HDFC Ltd joint MD, isn't worried. "We have been through the cycles of interest rate and real estate prices during our existence in the past 30 years. We have always had a growth of over 25 per cent in both loan approvals and disbursement, while always maintaining the gross NPA (non performing asset) levels below 1 per cent," she says.

A study by rating agency Crisil points out that when interest rates go up, as in the present scenario, the costs will be high. While a borrower may well be able to absorb a 50-100 basis point increase in interest rates, in the event of a higher increase of around 150 bps, it could increase the tenure of a 20-year loan to almost 37 years (if the EMI is not raised). Similarly, a 200 bps rise in interest rates could push a 20-year tenure loan into negative amortisation, meaning the balance keeps increasing despite repayments on the loan.

Jayaram Rao, director, Warrant Commercial Services Pvt Ltd, which handles a range of financial services including credit cards, personal and home loans, has a ringside view. And he does not like what he's seeing. "In the current scenario—higher costs of living and increasing interest rates—people are struggling to maintain monthly budgets. People who were earlier using credit cards only to buy consumer goods or to go for a holiday are now increasingly using them to pay grocery and fuel bills," he says.

While the credit card base has been going up steadily over the years, the last few weeks saw customer use of credit cards going up 22-25 per cent. Similarly, the number of requests for issue of new credit cards and personal loans has also shot up over 20-30 per cent, emphasises Rao. But, given the tighter rbi norms, many banks reported a drop in loans disbursement and issue of credit cards.

A welcome fallout of this has been the drop in unsolicited calls for new credit cards. "This isn't a function of the do-not-call list. The fact is that banks have clamped down on credit and are tightening the reins on this business," a senior private sector banker told Outlook.

With interest rates headed north, potential buyers have adopted a wait-and-watch policy. Suman Memani, research analyst at Religare Securities says, "Even in the cases of those who have housing loans, the pressure of higher interest rates is pinching...giving rise to fears of higher defaults than last year."

Loan recovery agents, though, point out that defaults on repayment are low in the case of housing loans in India, as compared to credit card and auto loans. Says Pankaj Joshi, director, Omega Alliance Recovery Solutions, "Higher the value, higher the delinquency. The collection efficiency, which was 73 per cent paying current month EMI, is today down to 69 per cent." The maximum defaults are in personal loans and those given to the sme sector, where it has gone up by two per cent. Crisil expects delinquencies across all retail asset categories to increase in 2008-09, including in housing loans, which constitute over half of the total retail loans in India.

This increased risk perception is already affecting the small ticket personal loans (below Rs 40,000) and, in particular, vehicle loans. More stringent criteria means that if an applicant is unmarried and living away from his/her family, there are less chances now of the loan being sanctioned.

For home buyers, the only ray of hope is the expectations of real estate prices coming down on the lines witnessed in the national capital region, where prices have dropped 20-25 per cent in the last few months. In the retail sector, companies started feeling the impact six months back, with many consumers putting off purchase of non-essential items like electronic goods. A salesman at Mumbai electronics store Sony Mony reveals that while overall sales haven't dipped, "the number of middle-class customers making purchases has come down".

In the auto sector, particularly motorcycles, Zaveri Honda executive director Kinjal Shah says, "The real drop in sales would be in the 100-125 cc bikes, which caters to the middle class. In the higher class bikes, there shouldn't be any drop."

Coming to the stockmarket, even as people take a call on whether to liquidate assets or not, by and far the opinion is that corporate investment sentiment hasn't been hit. "Till the first quarter, there was a 22 per cent rise in bank loans on year-on-year basis. Evidence does not suggest any slowdown. Bankers are still optimistic of above 20 per cent credit offtake by corporates," says Ananda Bhoumik, senior director, Fitch Ratings.

Angel Broking research analyst Shailesh Kanani, however, warns, "As of now, there is no sign of a slowdown, at least in the case of infrastructure investments. But if the high interest rates continue for another 6-8 months, there could be some impact, particularly in the case of road projects." It stands to reason that if the orders slow down, the capex will also go for a toss. Hopefully, rbi governor Y.V. Reddy will spring a welcome surprise during the first-quarter review on July 29 to boost investment sentiments.

By Lola Nayar and Arti Sharma