The Son Of Kaka Hathrasi 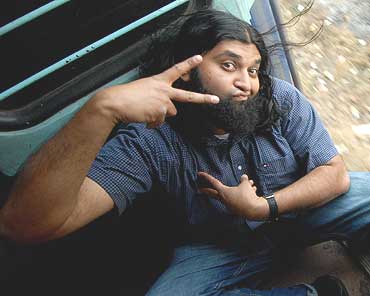 On his mother: "My ammijaan is a typical Bihari aunty, she can have a half-hour phone conversation with just three words: haan, ji, achcha, and they all mean the same thing!"

On Kashmir: "How much of the fighting is about Kashmir, and how much about mere cash?"

Hollywood's stereotyping of Muslims: "In Hollywood films, the Muslim men are always terrorists, and Muslim women are always oppressed! If they actually bothered to investigate a Muslim household, they'll find it's exactly the opposite!"

On why Indians can never be on time: "I always wondered about this: how can you speed everywhere and be late for everything? It's because we use the same word for yesterday and tomorrow! What's yesterday? Kal! Tomorrow? Kal! That's a 72-hour period!"

'Osama Bin Laughing', and 'the Ayatollah of comedy' or 'America's funniest Muslim'...these are just a few of the hyperbolic appellations that comedian Azhar Usman attracts. Not bad for someone who couldn't get a single laugh in his first mortifying stand-up outing—before a gaggle of desi aunties in a Chicago community hall when he was 14. Even more impressive is his ability to trip merrily along the fraught terrain of race, religion and communal stereotypes, and leave audiences chortling in his wake. Currently touring India and Pakistan, he has been hailed as a dazzling phenomenon by papers ranging from the New York Times to Cairo's Al Ahram.

Usman, a 32-year-old whose parents are from Bihar (a motherlode of humour he never ceases to mine), has been a stand-up comedian for the past eight years. His fame spread outside America when he toured five continents with the 'Allah Made Me Funny' comedy tour, introducing audiences to the alternately hilarious and frustrating realities of being Muslim and South Asian in the US—from the quirks of his family to the foibles of suspicious airport officials.

Usman began his career practising corporate law and running his successful dotcom. But in 2001, he was inspired to veer away from his stifling career by a chance visit to a Minneapolis comedy club: some of the comics were so cringe-worthily unfunny, he was sure he could do better. "What's inspiring about stand-up comedy," says Usman, "is how liberating, honest and unfiltered a mode of communication it is! Nobody else can introduce topics like race relations and power disparity so effectively to American socio-political discourse."

This agenda was briefly shaken before the 1,000-strong raucous audience at Aligarh Muslim University this week. A chorus of mews, peacock-cries, and the occasional heckling ("Where's your sherwani?") greeted Usman as he began. But what soon had them doubling up with laughter were his jokes about his ammijaan, his "typical Bihari dad", tired Bollywood storylines, the irresistibility of biriyani, and the absurdities of many Muslim marriage rituals. The most resounding hit, however, was Usman's recurring riff on an Indian expletive. "Saalaa!" he exclaimed, "How did it ever become a swear-word?" Then, in a low, menacing growl: "I'm related to you...only by marriage!" The audience roared back, gleefully chiming in with an echoing chorus: "Saalaa!"