The Smell Of Dead Bodies

R. Thangarasu, 42, sanitary worker: Hero for his unflinching dignity of labour, doing a job nobody wanted to do 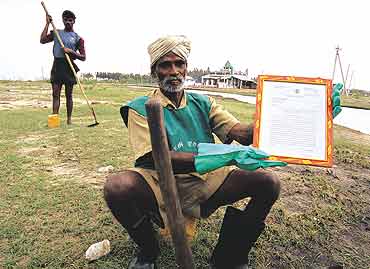 outlookindia.com
-0001-11-30T00:00:00+0553
Within 24 hours of the tsunami, the most urgent and necessary task was the disposal of debris and the dead—humans, animals and fish. And this had to be done before the NGOs could step in, before the government machinery moved in, before the task of relief and rehab could begin officially. In India, such tasks have been largely reserved for Dalits. It happened during the Orissa supercyclone and it happened during the tsunami. A total of 1,264 sanitary workers, 43 sanitary superintendents and 19 sanitary inspectors were mobilised from the adjacent 26 municipalities and rushed to Nagapattinam, which accounted for the highest toll in India—6,085 lives.

R. Thangarasu, a tsunami victim himself, was one of the sanitary workers who reported for duty at the Nagapattinam municipality within 24 hours. Kattunayakar Street, the segregated colony where he lives, is home to more than 60 people who work for the municipality in temporary and permanent capacities. After the tsunami waters ravaged the Kattunayakar Street as well, most residents fled to Thiruvarur, 40 km away, in fear.

Thangarasu did not. He reported for work and was assigned the task of clearing dead bodies in neighbouring Silladi Nagar, a fishing village. "I too ran from the tsunami, but returned by 1 pm the same day. I reported to work on December 27 and lifted and disposed 10 bodies that very day. Scores of workers from neighbouring areas had come—from Mayavaram, Trichy, Pudukkottai, Salem, Thanjavur, Srirangam," recalls Thangarasu.

Unlike workers in Indonesia, Thailand and Sri Lanka who wore body suits, gloves and other protective gear, Thangarasu and his co-workers used their bare hands and just a piece of cloth over their mouth and nose. "The stench would not go, though. The smell of dead people lingered inside me for many days afterwards. I helped bury close to 150 bodies in the Silladi Nagar mass grave." Keen to look good and respectable at least in the Outlook photograph, Thangarasu wears a green jacket and black boots. "We never wear these uncomfortable, cheap, plastic shoes. They would kill us with pain and cause blisters. We can't work wearing them," he says.

Were workers like him given gloves? "On the third day, they gave us some gloves. They seemed to be made of material used for balloons, and would tear easily when we used shovels and other iron gear," says Thangarasu. "We handled unrecognisable, rotting, orphaned bodies that nobody claimed. Bodies were prised free from sand, debris and palm thatch. We sometimes worked non-stop without food," recalls Thangarasu. While the sanitation workers gave dignity to the thousands of dead, there was no dignity for them in such work. The TN government recognised their contribution by default. Arguing that the army personnel did not dispose of bodies, chief minister J. Jayalalitha said it was the sanitation workers who did the work and paid Rs 2,500 to each worker "for doing the job without any hesitation".

Thangarasu has an additional bauble to show as recognition. A letter dated May 30, 2005, issued "in commendation of the good work done", by the district collector in the context of Bill Clinton's visit to Nagapattinam. What the National Council of Dalit Human Rights demands is not recognition of the heroism of thousands of sanitary workers like Thangarasu. It is: "The right kind of recognition would be to ensure that Dalits are no longer the only ones forced to do such dirty jobs."

No One's An Island