Ganguly must be careful about his body language, and stop changing the field after almost every delivery. It shows that he's not sure of his strategy. 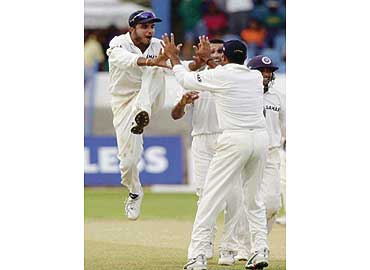 outlookindia.com
-0001-11-30T00:00:00+05:53
Let the party begin! India's splendid victory at Port of Spain was a good team effort, where everybody stood up to be counted. Both India and West Indies fought like tigers, not giving even an inch to the other, and in the end the better team won the thriller. It was a good value game for spectators and viewers too. Winning a Test is something that always calls for celebrations—what if it is only against the West Indies. For the die-hard Indian fan, this win may just be the light at the end of the tunnel he's looking for the team. Once again it is time to speculate on the resurgence of India as a Test team to reckon with, even away from the pudding pitches of the subcontinent.

One significant aspect of the Test is that India won without using two spinners as its frontline bowlers. Surely this could have major ramifications for the future. Firstly, from now on Anil Kumble and Harbhajan Singh will be under no doubt that they are competitors for a place in the team. In the past, it was an accepted fact that if fit, both would play. This was only because the quality of fast bowlers with the team weren't good enough to back up Javagal Srinath. From now on, Ganguly and Wright must keep tabs on the effect Kumble and Singh going head to head will have. Secondly, a team which has just won a Test is rarely changed, especially if everyone's fit. This means Kumble has a good chance of being left out again. The hosts must remember this while preparing the pitch for the next Test. I do commend Ganguly for the bold decision, or being part of it, to drop Kumble and coming to some form with his batting. Kumble must keep in mind the team objective and fight harder for his place in the team.

But Ganguly and his boys must not let this victory get to their head, and relax for the rest of the series. It is very easy to slip into this mode and if we were to look deeper into the match, it is very clear that the second innings collapse could well have turned out to be a deciding disaster. India's batting problems at the top of the order still need to be sorted out. The fact that the lower order too is totally inadequate with the bat doesn't help the cause either. Invariably, if a middle order batsman stays in, he soon runs out of partners.

There are some other tough questions that must be addressed. Do Indian tail-enders ever practice their batting at all? When will all (including the Great Tendulkar) start taking singles to rotate the strike and ease the pressure on batting? Defensive walling is not a solution either at the top or at the bottom.

Remember, on the flat pitches of the subcontinent batting collapses at the top of the order are rare. But on South African, English or Australian pitches, the new ball can create mayhem and this is the time when everyone else needs to pitch in. Sadly, that's not the case. The Indian coach must address this if India wants to fare well in the 2003 World Cup.

Another thing that has been disturbing me of late are the body languages of both Ganguly and Srinath. As the captain, Ganguly should always remain calm and in control even under pressure. He cannot walk around with a poor body language everytime the opposition plays a good shot or his bowlers throw a bad delivery. It shows disrespect for the players and the sooner Ganguly realises that every player is trying his guts out for India, the better. And then the continuous changes in your field placements, after almost every delivery, does nothing for the bowler. If nothing, it will only break his concentration. What it also shows is that Ganguly is not settled in his mind on a strategy. A good captain sets his field in conjunction with his bowler and then allows him to get on with the job. Of course, minor adjustments are expected from time to time, but not by running up to his bowler everytime and holding up the play. Srinath, on the other hand, has now resorted to shouting and screaming at his fellow fielders when a run is conceded and gesticulates like a mad man. No doubt he's the strike bowler and a senior member of the team, but he too must be reined in. I feel for him—he has put in a long time, with very little reward as far as wins away from home are concerned. However, there is a fine line between being hungry for a win and being desperate. He looked desperate for a win.

The team effort was indeed one of the most refreshing aspects of Ganguly's boys. For once, it was not as if the spinners were winning the game for the rest of the team. Surely, it will help the youngsters in the team to blossom and realise that they too can play a part in the team. And, the win has certainly saved Ganguly from the gallows for the time being, and he probably knows it.

But one swallow doesn't make a summer. Indians must remember this. Lara has not fired properly and Chanderpaul looks to be running into form. They say that when everything looks rosy in cricket, look around you because it can change in the blink of an eye. Enjoy the win lads, but stay humble even in victory. The series has just begun.

Pat Symcox :The right-arm spinner and former senior member of the South African team writes exclusively for Outlook on the India-West Indies series