The Sins Of Patricide

A CPM ideologue draws flak for his criticism of EMS 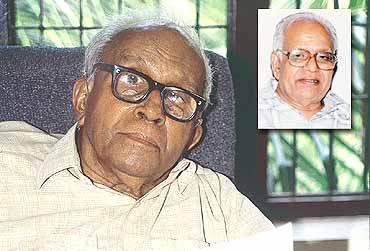 outlookindia.com
-0001-11-30T00:00:00+0553
Communist parties have not been known to treat heretics and iconoclasts with particular sympathy or kindness. In fact, inquisition has almost always been their fate. Of that, history has been a witness. So, P. Govinda Pillai, CPI(M)'s Kerala state committee member and ideologue, is lucky that he has been let off with only a public censure. Pillai's caustic critique of the late Marxist stalwart, E.M.S. Namboodiripad, in an interview to a literary journal has left the communist establishment in Kerala red-faced. What's worse, the criticism has come from a man who is a respected party ideologue and is currently editing the Collected Works Of EMS.

And it's not merely dogma that has prompted the communist establishment to react. The potshots that Pillai took at EMS are rather barbed and has, therefore, unsurprisingly angered many communist leaders. Here is what Pillai, popularly known as PG, has to say about EMS' leadership qualities: "EMS did not have the deep insight to lead the Indian communist movement. Only when he had no other go would he go beyond the bounds of the party. The only occasion when he is said to have breached party discipline was when he crossed over to the CPI(M) during the first split in the undivided CPI. He had a radical streak when young but as his loyalty to the party increased, he conformed to its dictates."

The picture of EMS that emerges from Pillai's outpourings is of an ideologically mixed-up leader lacking in organisational insight, originality of thought and depth—a conformist, intolerant of dissenters.

Pillai has said much of it before. But when they coalesced in a single interview, the impact was tectonic. The commissars sat in judgement early this week and consequently pronounced that "PG had committed the worst sin by lowering the image of the party and its leaders in public. His expression of regret is not acceptable. Yet, considering his seniority and long years of contribution to the party, the party limits the punishment to a public reprimand." Thus it spared him the ultimate punishment: expulsion.

Interestingly, the morning after he was censured, PG was back in the EMS Academy to lecture the party cadre on Marxism-Leninism. While Pillai is a highly respected leader, the general consensus in the CPI(M) is that he should not have aired his views in a magazine run by a newspaper group not exactly CPI(M)-friendly.

Many in the party, who consider EMS an erudite philosopher, are appalled by Pillai's views. Among other things, Pillai had said: "Achutha Menon had clinical precision in his writing. It's not possible to say that EMS had the same clinical precision. He was prolific but his writings were not of much value because he used to write every day, basing them on the day's context and reactions. EMS had no direct knowledge of archaeology or anthropology. He wrote history because others had already written it."

Though Pillai has apologised for "certain inaccuracies" that crept into the interview, the damage has already been done. Those who know PG say he has always lived with "a beleaguered conscience", battling the rights and wrongs of his party's positions on various issues. This is not the first instance of the party censuring him. He was demoted for sheltering Naxalite K. Venu during the Emergency. He raised the banner of protest against building a dam in Silent Valley, part of the Nilgiri biosphere. He also criticised the party for backing the Tiananmen Square repression.

What Pillai has now said in the interview is blasphemy to generations of party cadre brought up on EMSspeak. What has irked them is the direct and personal tone of the attack. Pillai revealed to his interviewer the confusion in EMS' mind: "The most important development taking place in the world communist movement was that it was moving towards more democracy and a more open society.These are all accepted facts today. But EMS could not theorise on them. Let alone propound a theory himself, he suspected those who tried to. All this was born out of a basic ideological confusion." Pillai also adds: "Unlike Stalin, EMS did not physically eliminate opponents, but he marginalised them totally."

Pillai's detractors see the outburst as a manifestation of the disillusionment at not being made a minister or given a senior party post. He was the youngest member in the CPI state secretariat in the early '50s. But he had some trouble rising beyond that. Perhaps, the party does not repose absolute trust in him.