Cinema business has evolved. Can investors be far behind? 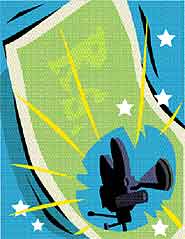 The Indian film industry has traditionally been plagued with a lack of transparency, non-commitment to deadlines, unprofessional work culture and piracy. So, organised finance kept its distance from the trade. However, of late there has been a measurable change in the products and processes which should catch any investor's eye. In fact, the entire value chain—production, distribution and exhibition—is getting completely overhauled.

In the production sector, there's been an increased focus on payback periods and return on capital. Filmmakers aren't just experimenting with film scripts but also catering to different niches. In fact, four distinct categories have emerged—multiplex, music, cable & satellite (C&S) and the international market. Chameli, for example, was a multiplex product; Tum Bin generated revenues largely from music sales; while Taal was essentially targeted at the international market.

The biggest concern of the financing fraternity has been the non-completion of films on time. This is being curbed to an extent. Insurance companies are providing covers for completion of movies which include insurance of the cast and crew, props, sets, wardrobe, film negative insurance, extra expenses, personal accident and legal liabilities. All this has given the financial community more confidence in investing in films.

The government has given permission to banks and other financial institutions to invest in films. IDBI in 2001-02 allocated Rs 1,000 million for funding film projects with 1:1 debt equity ratios. It has already committed Rs 600 million out of this amount. The Bank of India too has recently started funding films. Another encouraging sign has been the development of film funds. UTV is believed to be in the advanced stages of raising one. Film funds could lead to the formation of a cartel of domestic theatrical distribution or music companies, international theatrical and home video distribution companies and c&s and TV channels. Individual partners could have equity stake in the fund. This would lead to higher commitment levels and a strong delivery responsibility from each end leading to more transparency and risk mitigation.

In the distribution sector, large players are investing heavily in systems, processes and technology. With the advent of multiplex and quality theatres, distributors have increased the number of prints which in turn directly impacts the total collections. Another dominant shift is the way large players are moving vertically to dominate the entire value chain. For example, a production house like Yashraj Films has also got into the business of distribution, nationally and internationally. Mukta Arts too has combined distribution with its production interests, so has UTV. Adlabs has moved from film processing into production and exhibition. As a result, the entire risk for the film is now borne by the producer. Similarly, distributors are either moving downwards in the value chain (exhibition) or upwards (production). A notable example of the former is Shringar Cinemas while Delhi-based distributors, Ginni Arts, are getting into film production. Shringar and PVR have also managed to pull in organised finance into the distribution sector. Also producer-distributor alliances are emerging like the Zee-Rajshri partnership.

Piracy continues to be a major threat for distributors. Also the release window for a film is getting smaller because producers are going in for other exhibition platforms like c&s, TV and home video. To an extent, digital projection has also augmented the reach of films. Earlier, it would take four weeks for celluloid prints to reach small towns but today they're getting access to films much faster. International theatrical and home video rights too have had a face-lift. In 2003, four Hindi films grossed more than $2 million each in the US and UK markets.

It is the film exhibition sector that has been witnessing the maximum changes. With the advent of multiplexes, the number of screens has increased so the revenue from a film can be totally

'juiced out'. The 'experiential' viewing has resulted in higher attendance and increased ticket sales. This has directly impacted the number of movies that are produced in a year. The multiplex boom has also accelerated a number of low budget movies specifically targeted at the multiplex audience. There is a marked change in the way people now consume 'entertainment'. PVR, Waves, DT cinemas, Shringar, Adlabs and Fun Republic have managed to raise institutional funding of both equity and debt in the exhibition sector.

The Indian film industry today is on the threshold of a high growth which will be supplemented and complemented both by the quality of film content and an increase in the operational efficiencies and infrastructural facilities. The Indian film industry has witnessed significant changes in the last 12-18 months. Areas where appreciable progress has been made include corporatisation, organised film financing, film exhibition space and creation of better film content. What's needed now is that film financing should be made available to a larger section of producers. There's also a need for joint government and industry efforts to curb piracy.

(The author is director of Shringar Cinemas.)