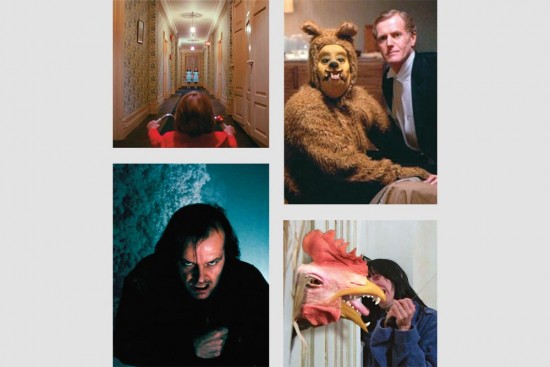 No music. Only the keening hush of an empty, and seemingly endless, hotel corridor frames the patterned squeaks of the young bionic boy’s tricycle as he wheels it round and round. Like an under-age hobo on a train to nowhere. Trailing the boy, with the camera dragging our eyes along just behind, a razor-sharp Kubrick forces us, impels us to join the journey, on our own tricycle of dread. You’d have thought the trail was a spiral, if not for the linear, sharply modular turns. As the boy turns every turn, you expect something. Nothing happens. Each time it’s belied, your sense of anticipation grows, accumulates. And then, a twin apparition! “Hey Danny, come play with us.” Shivers! To mirror our progressive derangement, and help us along to the edge of insanity, there’s Jack Nicholson. With one of the most chillingly innocuous lines in all cinema...”Here’s Johnny!” We get intimations of the abnormal, with a black cook talking to the boy, without talking, a weird subversion, come to think of it. A stifling but comic take on Nabokov’s Lolita from 1962, the dystopia of A Clockwork Orange, the anti-war satire of Dr Strangelove, the metaphysical sci-fi of 2001: A Space Odyssey...this fits neatly somewhere in the logical Kubrick grid.