The Shah Of Blah Coils A Cheery Orchard Yarn

The narrative skein of Rushdie’s new tale blazes with energy and adventure, with glimpses of adult concern 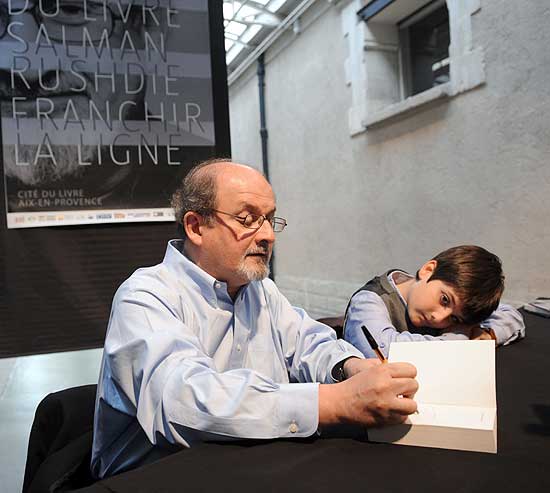 The notion of narration-as-creation has been much in the air these last decades: it is threads of narrative that bind communities, render possible the vast collectivities. Nations are, it is argued, products of narration. Which plausible idea, incidentally, already contains the germ of the disturbing possibility of multiple and competing acts of narration—a sort of civil war of narratives which frequently spills over into the uncivil kind.

Such considerations, however, are far removed from the world of Salman Rushdie’s celebration of story-telling, at least in Haroun and now, Luka and the Fire of Life. So Luka, who seeks to dismiss something as “just a story”, is reprimanded with jocular severity: “You of all boys should know that Man is the Storytelling Animal, and that in stories are his identity, his meaning and his lifeblood. Do rats tell tales? Do porpoises have narrative purposes?” But things still aren’t the same in Luka’s world as they were in Haroun’s—and there is a hint here of that adult resonance which is such an engaging feature of Rushdie’s writing in this mode: “Things had changed in Kahani, and sadness was no longer the city’s principal export.... The demand for glumfish had fallen away, and people preferred to eat...foods available from the Cheery Orchard stores that were opening everywhere you looked. People wanted to feel good even when there wasn’t that much to feel good about, and so the sadness factories had been shut down and turned into Obliviums, giant malls where everyone went to dance, shop, pretend and forget.”

Of course, not all the changes are quite so anaesthetic. In the twenty years since Haroun, much has happened to Mr R—not merely the fatwa, but also the transmogrification of the former postcolonial into the articulate legitimiser of the Bush crusade against “Islamofascism”—the “war on terror”, no less. There have also been a number of forgettable novels. But now, by way of a “gift” to his younger son, Rushdie has produced another work that recaptures the early magic. Luka and the Fire of Life is wonderful and one finds oneself wishing him many more sons—so that he can continue to produce more books like this one! It’s enough to make one start believing in  magic—but really, Salman the Terrible writing this warm, humane book?

The narrative trigger in Luka bears a certain superficial resemblance to the one in Haroun: the prodigious and overflowing stream of stories is in danger of being stopped, and the book consists of the adventures of Haroun in averting that danger so that the stream can continue to flow unhindered. In Luka, too, the clear and present danger is that of the flow of stories drying up—but the crucial difference here is that the threat emanates not from a Malign Other turning off the tap of narrative, but from mortality itself: Rashid Khalifa, the Shah of Blah, storyteller supreme, is under imminent sentence of the Great Unmentionable, and the book consists of the adventures of his son Luka, who must get a-hold of the Fire of Life so that his father may be reprieved in (the nick of) time—and the customary narrative plenitude restored. But while both books end, appropriately, on an upbeat—clouds have no place on the sunny uplands of childhood—there is a sense in the later book that the shadow of mortality that has passed over it has only been deferred. There will be a time for such a word, too.

Meanwhile, however, a great deal of action, and adventure, and plain downright fun is to be had as Luka sets off on his quest for the Fire of Life, accompanied by—a fine touch—a dog called Bear, and and a bear called Dog. The matrix for Luka’s quest derives from the computer “games” that are, on the evidence of Rushdie’s clear expertise with this sort of thing, not confined to children. Thus, the quest proceeds through nine successive levels, and at each level, new characters and new adventures happen, with progressively higher levels of difficulty. Interestingly enough, among the enemies that Luka must overcome, the most formidable are not the fire-breathing, violent, Luka-chomping monsters but rather, the Aalim, the know-all Three Jos—Jo-Hua, Jo-Hai, and Jo-Aiga—the stern disciplinarians who must be subverted through the riotous anarchy of narrative. It is futile to try and summarise the energy and vivacity of the book. But I must register my gratitude for the additional delights afforded to readers who are able to follow Rushdie’s multilingual punning—the land called Kahani and the river Silsila and, indeed, the dread Aalim! Rushdie’s Anglo readers don’t get the half of it.