BJP frets for Delhi, but will pull strings in post-poll Mizoram 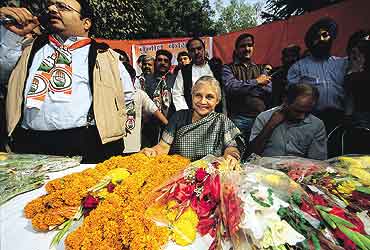 outlookindia.com
-0001-11-30T00:00:00+0553
Make no mistake, there will not be any nail-biting photofinishes in Delhi. The opinion polls are unanimous about the incumbent Congress government's victory. The flyovers, the ongoing Metro rail project and the improved power, water and transport situation in the city are among the reasons why a majority of voters are placing their faith in Sheila Dikshit and her team. Thus armoured, the Congress is taking it easy and sticking to a narrowly focused election strategy. Says Dikshit: "Our focus is on the government's performance in the last five years. We stand for progress, stability and development." However, disaffection over the distribution of tickets may lose the party some votes.

Bereft of concrete issues, the BJP has little choice but to resort to mudslinging. It appears to have decided to fight the elections on a Vajpayee vs Sonia plank. Flagging off the BJP's local campaign with loaded words in Chandni Chowk earlier this week, party president M. Venkaiah Naidu referred to the polls as the "semi-final" before the 2004 general elections.

The way the poll campaign has unfolded in Delhi establishes one thing for certain: the traditional power lobbies of the city-state and the issues of its sizeable semi-rural population have, perhaps for the first time, been somewhat marginalised by hardcore planks more beloved to the urban populace. It's to Dikshit's credit (or not) that the 2003 Delhi polls will be remembered for its explicit urban imagery.

Meanwhile, Mizoram, the state forgotten in the din of elections in the Hindi belt, seems on the fasttrack to a hung assembly. The state, which went to polls on November 20, 10 days ahead of the other four states, witnessed a 75 per cent voter turnout. It also saw a keen contest between three political forces—the ruling Mizo National Front (MNF), Congress, and a coalition of Mizo People's Conference (MPC) and Zoram Nationalist Party (ZNP). The BJP, which is contesting eight seats, is waiting to meddle in case of a hung verdict.

Though the mnf is fighting anti-incumbency, intra-party squabbles and corruption charges against PCC chief and former CM Lalthanhawla have ensured the Congress doesn't sail smoothly. The MPC-ZNP alliance was seen to be gaining ground among the common voters who might seek an alternative to both the mnf and the Congress. The buzz is that the BJP aims to prop it up since its only interest is to instal a non-Congress government in Mizoram.