Displaying boyish enthusiasm in his batsmanship, the 23-year-old Sehwag believes in the ball-is-meant-to-be-hit attitude. 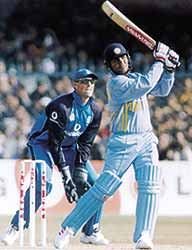 It was this innings that announced the arrival of Sehwag. It also enhanced his reputation and secured his place in the Indian one-day squad. In fact, his greatest honour came when people started comparing him with Tendulkar as his batting style matches with that of the "little master". And his success as an opener forced selectors to rearrange the batting order. Tendulkar was asked to bat in the middle order. Since then, Sehwag has often been referred as the ‘Second Sachin’, and from that moment onwards he never looked back, although a couple of injuries forced him to miss a few matches.

Displaying boyish enthusiasm in his batsmanship, the 23-year-old Sehwag believes in the ball-is-meant-to-be-hit attitude. He is uncompromising about his technique and treats his bat like a sword. Some of his shots were so powerfully executed that fielders dared not touch them. From the moment he took strike, he strongly believed that the new ball should be turned into an old one without much loss of time and battered out of shape and without delay.