Thanks to the parivar, the plague is now spreading down south 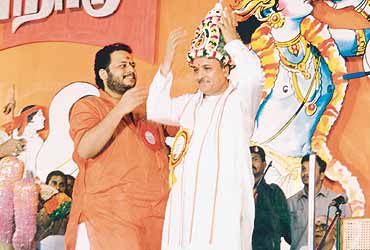 Togadia's next stops were Mangalore and Belgaum in Karnataka. A ban on his entry was obtained from the district courts after the ruling Congress slapped cases on him and six others for "fomenting enmity between two communities". However, the VHP moved the high court and got the ban lifted, ahead of Togadia's February 13 'Hindu Samajotsava' meeting in Mangalore. About 80,000 people participated and 16 seers from various maths attended the the VHP, RSS and Hindu Yuva Sena show.

In Tamil Nadu, the political climate has perceptibly changed in favour of the VHP's brand of politics. The aiadmk government's Prohibition of Forcible Conversion of Religion Act has enthused the Sangh parivar. Togadia and VHP supremo Ashok Singhal have been frequenting Tamil Nadu since October 2002. VHP's Tamil Nadu general secretary R.S. Narayanaswami concedes that "Jayalalitha is definitely pro-Hindu". Now they are demanding a ban on cow slaughter and also that the management of all temples in the state be handed over to Hindus. "Only in the four southern states are temples managed by the state. In Tamil Nadu there are 36,000 temples under the Hindu Religious and Charitable Endowments Department. It is only fair that Hindus control these temples," says Narayanaswami.