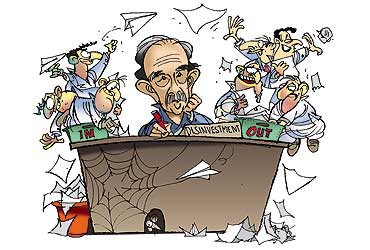 India's disinvestment story never seems to go beyond the first few chapters. Every time there's some movement forward, a new spanner is inevitably poked into the works. A fractious ruling coalition, an irresponsible opposition, self-serving politicians, confused thinking and constant policy flip-flops have kept the disinvestment issue a muddle of survival strategies, pipe dreams, missed targets, political turmoil and uncertainty. As investors openly begin to express their dissatisfaction, and some have even started walking out, the macro picture is turning bleaker by the day. The question on everybody's mind is whether anyone except the Department of Disinvestment (DoD) is really interested in taking the process to its logical conclusion.

Notwithstanding the lofty intentions that pepper the budget speech and cram the ministry website, many have started wondering whether the political establishment at all has the will to push the bill through. Worries compound as key cabinet ministers themselves appear uncomfortable with or unwilling to grasp the idea, or worse still, retract statements overnight. Aviation minister Sharad Yadav, for example, publicly accepts the necessity to privatise Air-India (A-I) and Indian Airlines (IA), but it's an open secret that he's actually opposed to the sell-offs. Last week, he even decided to come out into the open and raise the issue of job reservations for SC/ST candidates in the event of A-I being acquired by a private company. Or take communications minister, Ram Vilas Paswan, who also has reservations about diluting government's stake in MTNL to 41 per cent from 56 per cent.

Politicians' apprehensions about privatisation go beyond ideological differences. Says a Mumbai-based merchant banker: "Control over the public sector is integral to their power." With ministers treating their ministries and psus under them like milch cows, sell-offs of government concerns to private parties directly impinge upon their well being. Adds an investment banker from a multinational bank, darkly: "Don't forget the underhand dealings of the babus in psus."

Despite the seemingly endless problems, the DoD is putting up a brave face, with secretary Pradip Baijal ceaselessly reiterating the government's commitment to the process despite the constraints of coalition politics. Disinvestment minister Arun Shourie remains hopeful, although he's unsure about the proposed target of Rs 16,000 crore a year put forward in the draft approach paper to the Tenth Five-Year Plan. He has admitted that under current circumstances, big-ticket privatisation will be difficult to push through.

Even though Planning Commission officials feel that the government can raise around Rs 75,000 crore over five years, Shourie recently expressed his dissatisfaction with the pace of progress—it took eight months to just hive off Balmer Lawrie from ibp and move on to the Hotel Corporation of India (hci) privatisation, which has been negligible despite bureaucratic assurances of expediency.

Sources in the DoD also say that after the uproar over the Balco sell-off, the government would rather wait for Parliament to adjourn before any new deal. It is then unlikely that any good news will come before September when the monsoon session ends. That, in effect, only means one thing—further delay.

Post-Balco, investors are also likely to drive tougher bargains. Merchant bankers feel that potential buyers will seek better safeguards in the shareholding agreement.Says Ashish Guha, MD, Lazard India: "When the company passes on the money, they may want immediate change of management or will ask for guarantee from the government, like an escrow account." Others feel that if the work stops in the future after the transfer (a la Balco), then investors may even ask the government to bear the cost. This makes the process that much more difficult and also politically controversial.

The confusions are myriad and so are the allegations and mud-slinging. Every week, political parties dig up fresh issues and raise a shindig about the private bidders and the bidding process or the valuation. The Hindujas, bidding for A-I, have been the favourite whipping boys for their alleged Bofors connection. Now even the Tatas have come under the scanner.

The latest attack comes from firebrand Shiv Sena MP Sanjay Nirupam, who feels that giving A-I's control to either the Hindujas or the Tatas would involve security risks—the Tatas because of their alleged funding of ulfa militants. Even the Samajwadi Party is of the same opinion. In all this, everyone's ignored some key factors favouring the Tata group—they're among the most non-controversial and financially strong houses in the country, they have very strong roots in aviation and they have the Singapore International Airlines (sia), one of the world's best-rated carriers, as partners. Indeed, the Shiv Sena is adding a swadeshi spin to the issue. Says Nirupam: "We will oppose any A-I sale to a company which has an international partner. There is no guarantee that tomorrow sia will not buy out the Tata stake and subsequently, the Chinese may do the same with sia. You may end up handing over your national airline to the Chinese."

In any case, the recent SEBI orders banning three companies—Sterlite (Balco's buyer), bpl (interested in vsnl) and Videocon (bidder for IA)—from accessing the capital markets, and the brokerage business of Credit Suisse First Boston (csfb), an advisor to the government on the VSNL divestment, has already raised hiccups. Speculation has run wild ever since the SEBI order in early May. To sort things out faster, the DoD has proposed norms for disqualifying bidders who are now being examined by the Cabinet Committee on Disinvestment (ccd). The decision is expected on July 4. "The broad general framework has to take into account several factors, including the nature and frequency of the crime and the indictment. Also, have judgements been given by a regulatory authority or the courts? It also needs to be seen whether it's a single company or a group of them. All these must be taken accounted for before anything is finalised," says Shourie.

With the valuation of companies next on the divestment list like cmc, vsnl, Hindustan Teleprinters, ibp and Jessop supposedly nearly finalised, Baijal is confident that privatisation will get its jumpstart soon. To prove a point, the DoD is even willing to go ahead with cases that have just one bidder even if that implies political opposition and criticism from CAG. Bankers support wholeheartedly. Says Guha: "What is the guarantee that next time there will be more than one bidder? You just can't go on repeating the bidding process. One way to allow more bids is by removing the various restrictions." S. Sriniwasan, VP, Kotak Mahindra Capital, feels it depends upon the situation. Typically, one will have to assume that the shortlist has been arrived at after a global bidding process on terms that are on offer from the government.Even after this if there is only one interested party, the government will have to judge the credibility and value-proposition brought by that lone bidder. If he meets the norms and objectives, the government could proceed.

However, India Inc remains sceptical of DoD assurances. Most bidding companies prefer to maintain a stony silence but their frustration is palpable. Last February, Shourie had promised that the ioc-ipcl tussle over the valuation of the latter's Vadodara plant would be resolved in three months. That is still to happen. Says a senior official of a Mumbai-based industrial major: "The government is in a quandary. On the one hand, the political parties are clamouring for the nda's blood. But at the same time, there are not many buyers for the psus....the companies in the fray may lose interest because of

the delays." The A.V. Birla group, which had submitted its expression of intent in vsnl, has already pulled out. For A-I, the initial suitors included ITC, British Airways, Emirates and Air-France, but the list has now narrowed to only two.

Some observers feel that with the Centre missing the disinvestment target by miles and with the issue getting increasingly politically sensitive, it may be time to re-examine the official gameplan. The DoD, after facing scathing attacks over the strategic sell-offs, is also mulling over going the public offering route—both in the overseas and domestic market—for the psus. Sources say this will be the strategy for nalco and sci. But does the involvement of the masses make economic sense? After all, strategic partners are usually more willing to pay a premium for the psus because of the business sense the acquisition would make.

The Indian capital market's depth is another pointer: is there enough money to buy stocks? A Mumbai-based banker thinks this could be a problem. "We are talking of market appetite here and they are capital-starved. There is not much demand and the valuation will suffer. Also, how much will be offloaded is another moot point since it is directly linked with the question of management control."

But Rajesh Jain of Pranav Securities feels that public offerings are a good option. But like most others he too insists that ipos are no substitute for strategic selloffs. "Bulk offloading through adrs or gdrs will get a better investor profile but may not fetch much. But, there's a lot of liquidity in the local market and Indians still have full faith on reliable and properly-priced government paper. It also makes political sense as it's more transparent," he says. And Budget 2001's promise of tax exemption on capital gains from ipos adds to the attraction. After all, between 1996 and 1998, the government did raise close to $1 billion from the bourses. And lest we forget, they can also involve the fiis and tap the overseas market.

Ideally, most feel that taking the profit-making psus which do not immediately need drastic technological or managerial changes to the markets are the best way out. A good bet in this regard could be the oil companies—they are cash rich and enjoy a huge market clout. For the rest: stick to what you are doing right now. With a large dose of crossed fingers.