The Roulette Rolls On 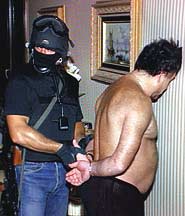 The Russian mafia has steadily grown roots and gained notoriety ever since it came to be noticed internationally in the ’90s after the collapse of the Soviet Union. Often controlled by former KBG agents, the crime syndicates may be nebulous but have a presence worldwide and are into political assassinations, robberies, arms trade, drug trafficking, prostitution and dealing in prize artefacts.

Even Russian President Vladimir Putin is on record that organised crime controls large sections of Russia’s economy. "Murders, kidnappings, criminal attacks and robberies have turned into something of a fact of life," the BBC has quoted him as telling senior security officials. Transparency International, in its 2005 study, ranked 146 countries on how free they were from corruption and related crime. Russia was placed at the bottom end, at the 128th spot.

The Russian crime syndicate has been on the prowl in the West for well over 15 years. Many of its operations are centred around the swish French Riviera and around New York and Miami. But footprints have also led investigators elsewhere. Such as human trafficking strongholds in Southeast Asia and tax havens like Nauru in the South Pacific. So much so that the mafia, according to the Russian Central Bank, funnelled $70 billion into Nauruan bank accounts in just one year (1998). Even the Swiss government issued a warning in 1999 that the mafia had infiltrated the country’s economy despite enhanced laws against money laundering. Other European countries, like the UK and Finland, are concerned about the presence of the Russian crime syndicate.

It is also active in Israel, where many Russians of Jewish origin have immigrated. In 2005, it launched a marathon inquiry into a money laundering scam involving Bank Hapoalim and froze funds worth over $370 million. High-profile account holders were questioned, including Vladimir Gusinsky, the self-exiled Russian media tycoon based in Israel.

Recently, the Russian mafia resurfaced in a high-profile prostitution racket in the French Alps in January. Also in the killing of Alexander Litvinenko, a former Federal Security Service (FSB) representative, in November last year in London. Other pet interests of the syndicate are football clubs, the stock market, big energy deals and the fishing business.

Despite efforts by international law enforcing agencies to contain them, the mafia continues to be at large. Many foreign enterprises still pay ‘krysha’ or ‘hafta’ to the mafia to survive and operate in Russia.