The Road To Harsud

Arundhati Roy on the death of a 700-year-old town, the Narmada's own mofussil Atlantis 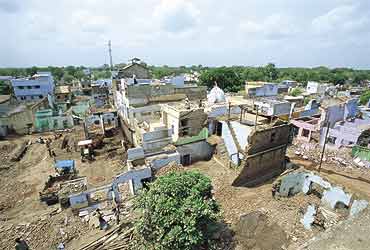 Villages die by night. Quietly. Towns die by day, shrieking as they go.

Since Independence, Big Dams have displaced more than 35 million people in India alone. What is it about our understanding of nationhood that allows governments to crush their own people with such impunity? What is it about our understanding of 'progress' and 'national interest' that allows (applauds) the violation of people's rights on a scale so vast that it takes on the texture of everyday life and is rendered virtually invisible?

But every now and then something happens to make the invisible visible, the incomprehensible comprehensible. Harsud is that something. It is literature. Theatre. History.

Harsud is a 700-year-old town in Madhya Pradesh, slated to be submerged by the reservoir of the Narmada Sagar Dam (sometimes called the Indira Sagar). The same Harsud where in 1989, 30,000 activists gathered from across India, held hands in a ring around the town, and vowed to collectively resist destruction masquerading as 'Development'. Fifteen years on, while Harsud waits to drown, that...