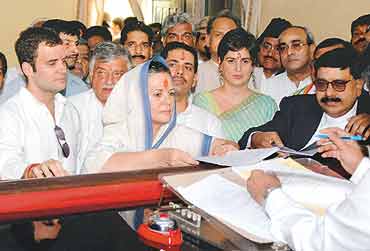 There are likely to be no surprises in the byelections in Sonia Gandhi’s pocketborough, Rae Bareli. But the polls, scheduled for May 8, have put the BJP in a spot. First it could not find a candidate willing to test his or her strength against Sonia. Indeed, it took a great deal of cajoling on the part of party president Rajnath Singh and senior leaders L.K. Advani and Kalraj Mishra for party general secretary Vinay Katiyar to file his nominations. But Katiyar is not a happy man. He has been openly complaining about being made the "bali ka bakra" (sacrificial lamb). Having only recently been nominated to the RS, Katiyar will now have to give up that seat too.

Not only that, the buzz in Lucknow is that national-level leaders like Vajpayee and Advani may not take active interest in the election campaign since it is seen as a lost cause. What has made things worse for Katiyar is the presence of the Apna Dal candidate—Prabha Singh Lodhi—who has the support of BJP rebel and...