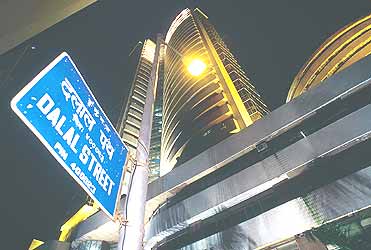 outlookindia.com
-0001-11-30T00:00:00+0553
The bulls have won round one on the bourses. Barring the technology sector, which is still down in the dumps due to uncertain business climate, stocks all around have seen aggressive buying in the past few months. Shedding the lethargy that dogged them for several months, the BSE Sensex has crossed the crucial 3500-mark, while the Nifty has breached the psychological barrier of 1100.

What's remarkable about the current rally is it's not limited to these 30-50-odd index stocks, but has percolated down to the mid-cap and small-cap stocks. Not only that, the broader market indices have, in fact, outperformed the bluechips. The BSE-200 index, for instance, gained as much as 27 per cent in the last eight weeks, while the broader BSE-500 rose 28 per cent in the same period. Little-known companies have delivered stupendous gains of over 100 per cent, riding on unusually heavy volumes. Arvind Remedies, a B1 group stock, has risen by 112 per cent to touch Rs 7.35, in the last one month, riding on two lakh shares. Oriental Containers has delivered 204 per cent increase in market capitalisation at Rs 42 per share, up from Rs 13.80 a month ago.

Leading the pack are obvious ones like public sector undertakings, banking and finance, automobiles and power. They have now been joined by hitherto beaten-down stocks from the pharmaceutical and FMCG sectors. In fact, market sources say the presence of technology heavyweights, which underperformed, prevented the big ones like the Sensex and Nifty from showing a sharper bend. But even as marketmen celebrate the return of the bulls after a one-year hiatus, we need to know if the good times will stay. Is this the initial round of a marathon or yet another 100-metre dash?

Where is the market deriving such energy and optimism from? From all over really. Money is flowing in from every direction—institutional investors across the seas and domestic funds. Data released by market regulator SEBI reveal that foreign institutional investors (FIIs) have pumped in more money into the Indian markets in the first six months of 2003 than for the entire year of 2002. In the first fortnight of June 2003, fiis had invested a net of $364.3 million in equities, up 42 per cent over the month of May. And the May figure ($257.2 million) itself was a vast improvement over the April figure of $90 million.

So, why are these men so gung-ho about India? Says K.R. Choksey, chairman KR Choksey Shares and Securities: "The price-earning (PE) multiple of emerging market indices, India included, are significantly lower than those of developed markets. This makes them an attractive investment destination." Asit Koticha, managing director, ask Raymond James, endorses this: "For fiis, the quality of companies in the Indian market, at current valuations and growth potential, is among the better options on the Asia Pacific investment horizon." However, U.R. Bhatt, director and head (equities), JP Morgan, strikes a cautious note: "The fiis are still testing the Indian waters."

Not to be left behind in the race for stocks at low valuations, domestic funds too are targeting the equity markets. Although the SEBI data allots mutual funds a net seller status, marketmen believe this is mainly due to redemption pressures in PSU mutual funds like the UTI. Typically, the March-April period is characterised by significant selling by mutual funds but this time around the selling is believed to be comparatively lower. In fact, Koticha believes the broad-based rally depicted in the BSE-500 movements is on account of mutual funds scouting for value picks among the second-rung stocks. R. Sukumar, chief investment officer, equity, Franklin Templeton India, says the slowdown in UTI selling has tilted the demand/supply in favour of a rally.

The second prime mover has been the on-time arrival of monsoons, after a very late and scant presence last year, triggering a huge feelgood sentiment. Says a prominent foreign fund manager: "Timely monsoons will boost the sentiment for sectors such as automobiles and FMCG." Adds Choksey: "The start-up to the monsoons has been good. If the rain gods continue to smile on us, the feelgood factor should hold." The third factor responsible for the positive sentiment is the business confidence. A recent report by Enam Securities on the Indian equity market cites improving domestic demand, growth in industrial production and booming exports as reasons for optimism. The corporate sector has also doled out sufficient amount of good news to maintain the market's stamina. Financial results for the quarter ended March 2003 gave the market much to cheer about. Profits have grown by 33.1 per cent, the highest in the last five years, riding on a sales growth of 13.8 per cent—a sign that the corporate sector has finally started to deliver.

Positive sectoral developments have also helped. For example, the pharma industry, which was beaten down by sluggish sales on account of the ambiguity over VAT, got a fillip after the US paved the way for quicker generic drug launches. The introduction of the Electricity Bill has energised the stock prices in the power sector. Expectations of a cabinet committee meeting on disinvestment next month has seen the BSE PSU index jump by 41.2 per cent over the last eight weeks. In addition, the successful completion of the Maruti ipo has further revived the market sentiment, revealing the demand for good quality paper.

Choksey points out that another reason for the positive sentiments with regard to Indian companies: increased outsourcing. "First, it was software, then pharmaceuticals and now automobiles. The outsourcing story bodes well for India as it means more dollars flowing into the country." Besides, improved export performance of these sectors would translate into increased sales and expanding bottomlines—the two pets of marketmen. "Overall, the markets had been subdued for a long time, in spite of good fundamentals and low valuations. A re-rating was on the cards and with war fears over and oil prices stable, the market has responded positively," sums up Koticha.

Will the uptrend continue? The general refrain is that the rally is here to stay. Says Sukumar: "Even at current levels, we believe the valuations continue to be attractive and there is more upside." But Choksey believes the market needs an external trigger to move up further. In the short term, lateral movements of the index are likely to dominate the scene. The Enam Securities report on the Indian market is more upbeat and says the "bull market should crest in 2004". However, it maintains a valuation cushion for monsoon vagaries and delay in reforms due to forthcoming elections next year. Koticha, too, continues to be bullish. Most marketmen are looking at the Sensex remaining above 3500 and even breaching the next psychological barrier of 3750 so as to formally seal the bull-run. Motilal Oswal, cmd, Motilal Oswal Securities, considers power, automobiles, refineries, banking and pharmaceuticals to be the hot sectors. Technology, however, seems set to continue in the dumps for some more time. Cement and metal could perform if the economy picks up.

So, where does that leave the retail investor? Recommends Bhatt: "Don't let the upbeat market make you overlook the basic principles of stock investing—research and analysis." Sukumar's advice to retail investors is to look at equity investments with a long-term horizon. "While the short-term ride could be bumpy, the long-term story continues to be attractive." For those waiting for the weather to turn sunny, some prudent thinking and patience could fatten their portfolio.

Looming Menace On The Skyline