BSF, trigger-happy or on the job? Depends on the side of the fence. 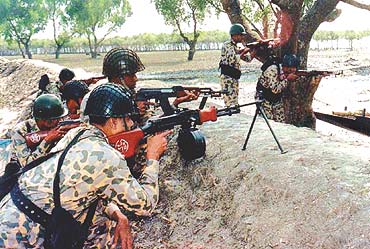 Bangla take It's a BSF-smuggler nexus. Indian cartels use BSF to neutralise their Bangla rivals.

All along the porous Bangladesh-India border, there's no such thing as truth; there are only contradictory stories. What you believe depends on where you are located—whether on this side of the border or that. Take the incident in Zakiganj, in which two people were killed and many more injured in early August. The Bangladesh Rifles (BDR) claims India's Border Security Force (BSF) entered its territory and attacked farmers in an enclave known as adversely possessed land, a term used for land belonging to one country but in possession of the other.

Not true, counter the Indians. Their high commission here claims the Zakiganj incident was sparked because of the "continuing attempt at infiltration and encroachment by Bangladesh into approximately 220 acres of land at the western bank of the Surma river.... There are well-demarcated boundary pillars in this area, clearly indicating that the land belongs to India". The high commission also accused the BDR of tacitly encouraging Bangladeshi civilians to undertake illegal cultivation of Indian land. The conclusion: the Zakiganj incident occurred because the BSF was retaliating against the BDR's illegitimate action.

Such mutual recriminations, however, are of no solace to Bangladeshis living along the border. The killing of their relatives and acquaintances has gradually created an adverse impression about the Indians here—that they in their chauvinism and arrogance are loath to control the trigger-happy BSF; that India is the 'enemy' about which Bangladesh will have to increasingly worry. This impression has gradually seeped from the border areas into the mainland.

Bolstering this impression are the figures of deaths routinely cited here. Bangladeshi human rights group Odhikar says between January 1, 2000, and December 31, 2005, 461 Bangladeshis were killed by India's BSF and criminals, of which 368 were killed by the BSF alone. The Odhikar spokesperson further claims that 83 Bangladeshis have been killed this year alone, citing these figures to demand an international probe to stop these "inhuman" killings. The BDR itself asserts the death toll has been mounting over the years—between 1996 and 2000, only 111 Bangladeshis were killed, in sharp contrast to the 359 fatal casualties between 2001 and August 20, 2006.

But statistics appear remarkably different through the Indian lens. The spokesperson at the Indian high commission says between January 2000 and June 2005 the BSF killed a total of 399 people. Of them, 265 were Bangladeshi, 117 Indian and 17 persons of indeterminate nationality. Thus, about 31 per cent of those killed were Indian. Out of the 265 Bangladeshis, 182 were involved in smuggling contraband goods, 42 were cattle smugglers, one arms smuggler, 12 narcotics and drugs smugglers, two were involved in dacoity and 26 in other crimes. Even these figures show that the casualties on the Bangladeshi side are nearly double that of India.

Says Mahfuz Anam, editor of the Dhaka-based The Daily Star, "Regardless of circumstances, I cannot understand why so many Bangladeshis have been killed in BSF firing. If they were trespassing, they could have been arrested and handed over to our border force. Why kill unarmed people? There is a perception that Bangladeshis are being killed recklessly and without any thought to the consequences of such killing. This perception is definitely adding to an overall impression of the high-handedness of India in dealing with Bangladesh. This is definitely not conducive to healthy Indo-Bangladesh relations, which I believe both sides desire." 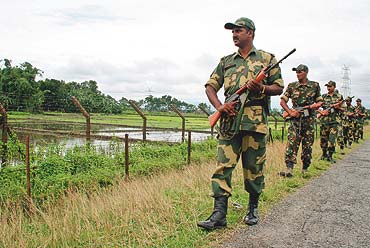 Perceptions also vary over the causes underlying border firings. BDR sources claim a major reason for the conflict is the BSF's nexus with smugglers. They say rivalry between smuggling groups over big financial transactions prompts the Indian cartels to take the assistance of corrupt BSF personnel to neutralise their Bangladeshi rivals. They argue that the BSF-smuggler nexus can be gleaned from the fact that drug peddlers, including those dealing with a cough syrup called Phensydyl, which is banned in Bangladesh, are not victims: they simply grease palms for safe passage. According to the BDR, cattle traders and farmers are principal victims, that the BDR-BSF incidents are mainly sparked by the killings of civilians, cultivation on adverse possessed land, fencing and illegal construction by Indians.

Says a top BDR source, "The BSF is a trigger-happy force. When we tell them about people being killed on our side, it says an almost equal number of Indians are killed by them on the border." He further adds, "What is sadly evident is that they shoot to kill—and not to scare. For, most victims are shot in the head or chest.... The BSF can demonstrate it is our friend by accommodating our views and positions on certain issues instead of just imposing theirs."

Talk to the Indians, and you get a different picture. Rubbishing the BDR's accusations of the BSF-smuggler nexus, the Indian high commission spokesperson counters, "This is an unfair allegation. I'd say there are a lot of allegations against the BDR providing support to smugglers and other criminals." He further says there are armed gangs ferrying contraband, weapons and arms across the Indo-Bangla border, that there's a lot of trafficking of women and children from Bangladesh into India. "The BSF's objective is to ensure that such kind of cross-border illegal activity does not take place. Not only Bangladeshis, but a large number of Indians have also been killed by the BSF.... All those killed are people engaged in criminal activities," he asserts.

These killings, says noted security analyst Brig Gen (retd) Shahedul Anam Khan, are because of the peculiar nature of the Indo-Bangla border. He explains, "It's a line that has divided families and cut across hearths, broken up homes, and separated homestead from the farmland that belonged to it. These are areas that are vibrant and alive. The reality is that natural interactions between people on the border that had existed for centuries were disrupted very literally with one stroke of the pen (British-designed partition). Thus, a more humane approach to some of the border issues is required."

"One approach," argues Imtiaz Ahmed, an International Relations professor at the Dhaka University, "is not to keep the bordering areas peripheral in each nation's development agenda, but turning them into industrial areas so that people from both the countries can find employment and return to their respective homes at the end of the day. This could turn the frontier into a friendly area from a tensed one." It could well be an advice worth heeding.