Criminals now dictate the lifestyles of doctors in Bihar. It's the patients who are bearing the brunt. 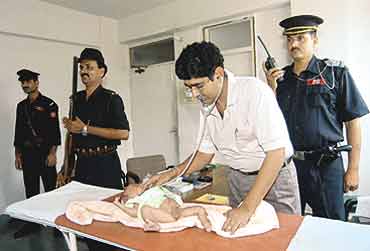 outlookindia.com
-0001-11-30T00:00:00+0553
"I’ve stopped inviting doctors to dinner," says Dr Ajay Kumar. "Each one comes with some two to four bodyguards and I can’t afford to feed them all," he adds. A glimpse of the grim situation confronting doctors in Bihar. Most have arranged for security, snapped their phone connections, avoid going out and attending patients on call is out of question. Their chambers are fortified with metal detectors and close-circuit monitors. Some have obtained licences for personal arms or applied for it. Several have shifted out and many more are packing up. All because of extortion calls from notorious criminals.

In the last six months, the situation has turned worse. Following the murder of their colleague Dr N.K. Agarwal in his Patna clinic, doctors went on a state-wide strike. But now, almost every month, a doctor is kidnapped and so far some 300 have received the dreaded calls. "I really feel threatened," says neurologist Gopal Prasad Sinha. Gangsters have demanded a ransom of Rs 50 lakh or else he could get killed. Sinha, who was conferred the Padmashree last year, is scared of venturing out. He is escorted by securitymen who keep a vigil on patients and their attendants. But Sinha has his own back-up—a loaded revolver.

Security arrangements at Dr Purnendu Ojha’s residence-cum-clinic are elaborate. Security guards hover around even when the paediatrician attends child-patients. He does not come out of his clinic and lives in a fortified home with wall-top iron spikes and metal shutters. Ojha has reasons to be scared. He was abducted a few years back and released only after paying a huge ransom. "I now look at everybody with suspicion," he says.

Orthopaedic surgeon R.N. Singh also keeps a loaded pistol under his working table. "This is to meet any eventuality," he says. Manju Gita Mishra too has received extortion calls. The noted gynaecologist is visibly terrified and as precaution has hired security guards. All her phone lines have been disconnected.

According to the Bihar chapter of the Indian Medical Association (IMA), in the last two years, 30 doctors have been kidnapped and five shot dead. The number of abductions is believed to be higher since not all cases are reported. Many prefer to deal with the gangs and save their lives. At the recently held IMA annual convention in Bhubaneshwar, the issue was discussed with much concern. But soon after the convention, another doctor was abducted in Purnea. Orthopaedic surgeon Udit Kumar Raja was driving when six motorcycle-borne criminals intercepted and took him away. IMA has again warned of a total strike.

Dr Kumar, however, feels hiring security guards or keeping guns is no solution. "Securitymen are useless. They’re not going to protect us," he says. He has some novel ideas that include protection and counter-attack systems in vehicles to escape kidnappers which he says the IMA is considering recommending.

In this imbroglio, it is the patients who suffer. Sinha has stopped house calls. And Kumar doesn’t even entertain requests from close friends and relatives to visit a critical patient. "What if they’re being coerced by a criminal at gunpoint," he says. With poor facilities in government-run hospitals, patients have no choice but to approach private clinics. But strikes and now the security cover has only multiplied their sufferings. A patient squatting outside the clinic of a noted cardiologist says he was waiting to meet the doctor for three days. The doctor’s staff were hesitant to allow him entry because he hails from the village of a noted criminal. "It’s sad but we can’t take a risk either," said a doctor.

In this doctors vs gangster battle, the government is a mute spectator. After Agarwal’s murder, some promises were doled out. But criminal elements continue to rule the roost.