The Race To Be Heard 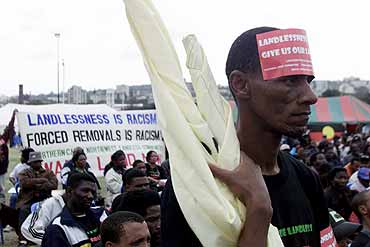 outlookindia.com
-0001-11-30T00:00:00+0553
Just when everything seemed to be going well for the strong Dalit contingent lobbying at the ngo forum of the World Conference Against Racism (wcar) here, a showdown at the plenary session with UN secretary-general Kofi Annan, on the eve of the inter-government conference, has put the skids on their campaign.

Annan snubbed the agitating Dalit activists who wanted him to respond to a statement by Republican Party of India MP Prakash Ambedkar that caste-based discrimination should be included in the programme for action and declaration at the inter-government conference. "We have come here to listen to each other and not to behave in this way. Let us have a serious dialogue," said Annan to the protesting Dalit activists. The secretary-general further told a packed plenary of about 5,000 ngo delegates and media persons that Ambedkar's was a statement and not a question that he had to answer. "Let us listen to each other and respect each other," a visibly annoyed Annan admonished the Dalit protesters. Also present was UN Human Rights Commissioner Mary Robinson.

Even before Annan's outburst, the Dalit campaign didn't have a positive start. First, South African president Thabo Mbeki's inaugural speech at the wcar ngo forum deflated their hopes. Mbeki used strong language to condemn the days of apartheid in South Africa and vociferously endorsed the suggestion of discussing the issue of Palestine, but refrained from mentioning the caste issue, or discrimination on the basis of descent and work. Similarly, Mary Robinson also skipped the subject and mentioned the issue in her speech only after screaming Dalit activists reminded her about it.

Their campaign, because of the size of the delegation and its aggressive media publicity, attracted tremendous media attention, second only to groups representing the conflicting interests of Palestinians and Israelis. But all their efforts seem to get aborted. In contrast, a rather peaceful group of Roma Gypsies, who migrated from northwest India to the Balkans centuries back, have garnered support from all quarters, including a mention from Annan.

Smita Narula, senior researcher with the Asia division of Human Rights Watch and one of the lobbyists for the Dalit contingent says, "This shows how the Indian government is using its strategic and economic clout on UN member states against discussing an issue that involves the lives of 200 million people."

ncdhr convenor Martin Macwan, however, expresses satisfaction over what the movement has achieved. "We have succeeded in making the Dalit issue very visible in this world forum. So far, people the world over had little knowledge about the caste system in India. Our sustained campaign has succeeded in correcting that besides garnering support from various quarters. We'll try our best for representation of Dalits in all forums at the inter-government conference." The campaign, essentially, has a six-point programme including implementation of land reforms, comprehensive legislation to ensure proper wages to labourers in the unorganised sector, eradication of manual scavenging and rehabilitation of the segment involved in this work.

With Kofi Annan's strident criticism, the Dalits are now depending on the group of lobbyists for inclusion of caste-based discrimination in the UN Declaration at the inter-government meeting. Dalit ngos are also talking with other caucuses to win support.

The stage is now set for the next battle, to be fought at next week's inter-government conference. The Indian delegation will be led by minister of state for foreign affairs, Omar Abdullah, and includes former bjp president Bangaru Laxman as well as foreign secretary Chokila Iyer. The side has already made its stand clear that it will oppose the inclusion of caste as a form of racial discrimination, much to the chagrin of Dalit activists.

With the Dalit delegation insistent on taking the fight into next week, the showdown with Annan holds out promise for some fiery speeches and discussions. The results on how far their efforts succeed will be out only next week.

(Log on to outlookindia.com for daily updates from Durban.)