The Congress, on the poll upswing, is avoiding talk of 2002 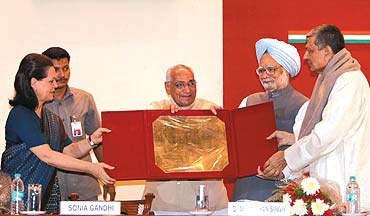 outlookindia.com
-0001-11-30T00:00:00+0553
The Congress has always tiptoed around the Gujarat riots issue, wary of awakening the ghosts of the state-sponsored carnage, and mindful that it could help CM Narendra Modi consolidate the Hindu vote. But a fresh media investigation, a stark reminder that this was one of the most shameful episodes of post-Independence India, has finally forced the hand of the party.

Congress spokesperson Jayanthi Natarajan was quick to put out a statement that Narendra Modi had "lost all moral and constitutional authority to rule". In a more measured response, Union minister for science and technology Kapil Sibal, describing Modi and democracy as being "antithetical to each other", appealed to the people of Gujarat that since the courts had failed them, it was time "the cause of justice is vindicated and what Narendra Modi has done...be placed before the court of the people...to judge whether they want a Gujarat with Modi or without him."

Coincidentally, the Indira Gandhi National Integration Award this year went to academics Ram Puniyani and J.S. Bandookwala, both associated with the battle against communalism in Gujarat. In her felicitation speech on October 31, Congress chief Sonia Gandhi said: "The truth revealed recently has established even more forcefully the correctness of the path adopted by social activists. Fighting crimes against humanity is the prime responsibility of all Congressmen...." Sonia may have stayed off mentioning Modi, but the message was clear—this could be a major Congress theme in the Gujarat polls.

But how will it play out on the ground? Opinion in the Congress is divided. While one section feels the party "should not pull its punches", others stress the need for a calibrated response to ensure that while the episode is not glossed over, Modi is also prevented from deriving any advantage from the fresh revelations. Senior party leader Salman Khurshid says, "The issue is once again on the table, so it can't be ignored. But we need to be careful how we respond—that's critical."

This is especially so as the Congress actually hopes to oust Modi—and has a sporting chance of doing so. For one, the Hindus are currently divided: thanks to Modi's autocratic ways, key Patel leaders (such as former CM Keshubhai Patel, ex-home minister Gordhan Zadaphia, Rajkot MP Valabhbhai Kathiriya) and the VHP (such as Praveen Togadia) have revolted. This has resulted in massive shows of strength by the Patels. The Kolis, too, are up in arms after two of their girls were raped and murdered in Junagadh five months ago.

Meanwhile, the tribals (traditional Congress voters) who had voted largely for the BJP in the assembly polls in '02 are a disillusioned lot now. Placed on the frontline in the violence against Muslims by Modi, they were pawns in the hands of VHP leaders and were arrested in large numbers later. Most of them continue to languish in jails. The Congress now hopes the tribals will return to the fold. But Modi seems to have circumvented the move—in a ceremony on October 2, he handed over forest land rights to 30 tribals to refocus attention on the fact that the Congress is yet to notify the Forest Rights Act, '06.

The Congress clearly does not want these divisions among the Hindus to be papered over by the Tehelka revelations. Party general secretary and state in-charge B.K. Hariprasad says, "The issue will come up but as part of the total failure of the Modi government. We'll highlight the fact that many tribals remain in jail; that over 5,000 Muslim displaced families still live in 46 makeshift colonies. Modi talks about a vibrant Gujarat, we want to ask him whether all these people are not Gujaratis. He also hasn't spent the Rs 60 crore allocated by the Centre for an urban renewal mission for the poor in the cities. Are these poor people not Gujaratis? And far from empowering the local bodies, he has diluted their powers."

The Congress—though unusual for it—has been working to a plan ever since Sonia addressed a three lakh-strong audience in January this year in tribal-dominated Dahod in central Gujarat. Apart from attending every anti-Modi rally, party leaders have held jan mitra camps across the state, with each one attended by 3,000-odd party workers, reacquainting them with the Congress ideology, particularly the importance of secularism. It's clear the party does not want to repeat the mistakes of '02. Says a senior party functionary: "We can't fight Hindutva with soft Hindutva, as we did last time." So Gandhi was invoked when Modi relaxed the prohibition policy and the original Iron Man, Sardar Patel, 'recalled' to press home the message of communal harmony. Says state Congress chief Bharatsinh Solanki, "There isn't a single village left where we haven't put up the 'hand' (party symbol) and Soniaji's picture."

But will all this effort pay dividends? A civil servant from Gujarat says, "Fortunately for the Congress, the vernacular press hasn't played up the 'revelations' and so it hasn't made much impact. Modi feels the issue could help him in Gujarat, but since his next ambition is to become a national leader, he doesn't want to be portrayed negatively...that would damage him outside Gujarat. Hence, his stress on development." Something the Congress is working on puncturing as well.