Geelani says the police tried to kill him. The police rubbishes the charge. So, what really is the truth? Updates 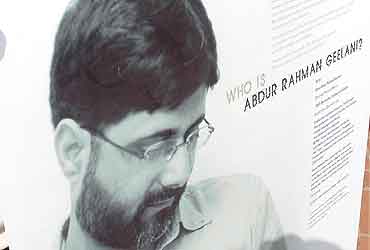 For over two years, even after his acquittal by the Delhi High Court of the charge that he had a role in the 2001 attack on Parliament, Geelani has been fearing an assailant's bullet. But neither he nor his advocate Nandita Haksar dreamt it would happen right outside her door in a secure neighbourhood like Basant Enclave. It was 9 pm on February 8 when Geelani finally made it from his evening classes in Zakir Hussain College to Haksar's colony—a drive he has made frequently in the last few months since the Delhi Police filed an appeal against his acquittal by the high court. A reluctant driver at the best of times, Geelani had just managed to find a parking space for his newly-acquired Maruti, not right outside her gate but close enough, barely five metres away. He fussed in his novice way, cross-checking if the car's doors and windows were actually locked. When he turned around, he was faced with his worst nightmare: "a man, medium height, in trousers and shirt, wheatish complexion, short hair, unshaven face, unspectacled, holding a pistol—or revolver—with both hands." In the split second it took Geelani to realise that he himself was the target, the man had fired five bullets, three of them lodging in his intestines, ribs and left shoulder. It took all of Geelani's famed spirit—the man who refused to confess in police lock-up—to sprint across the road into Haksar and her husband Sebastian Hongray's flat; and it took the couple's ready wits to rush him in their car to AIIMS, shouting at him all through the 15-minute drive "not to give up now, not when the case is just about to conclude;" rolling him onto a stretcher and into the emergency ward where the overawed doctors got to work on him instantly.

According to Geelani, it had to be someone from the police—the Special Cell, whose job it is to preempt crimes of a political nature—which has been tailing him and his lawyer ever since his release from Tihar jail on October 30, 2003. No one else could have known, he pointed out, that he had an unscheduled appointment at Haksar's home that night as it was made on his mobile phone around 5 pm; secondly, they had set up a fellow prisoner to attack him with a blade when he was in Tihar; and they had been shadowing him constantly ever since his acquittal.