The Price Of Survival

India's tactical thinking turned to naught. There was little attention to detail and the reading of the match situtation was sometimes totally incorrect. 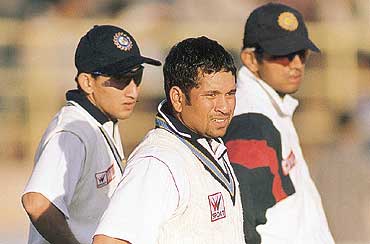 outlookindia.com
-0001-11-30T00:00:00+0553
Sadly, the Indian tour of South Africa will be recorded as one dogged by controversies—ranging from match-fixing to incompetence from the game's custodians. Where it will all finally end, no one knows. One thing's for certain though: the players provided some wonderful entertainment and we are once again left wanting to see more.

India's emphatic win in the tour opener against the Oppenheimer XI led all of us to believe that for once, India may be onto something good. Sadly, it wasn't to be. Between John Wright and Saurav Ganguly, India were unable to match SA's intensity and even allowed themselves to lose to Kenya. Remember, the word "upset" no longer exists in cricket's vocabulary. A good team on paper just has to always beat the weaker team nowadays, or incur a queried glance. The final saw India succumb to a far more organised and motivated team, in what was their umpteenth loss in a final.

Everyone expected the arrival of Laxman, Khan and Nehra to add an extra dimension to India in the Tests. However, deep down I always knew that playing Pollock's men in their own backyard was going to test the very core of the Indian players. Coming to South Africa has been a tough assignment for many teams and many better players have been found wanting. So, who in the Indian team has left with any sort of reputation intact and how will it affect them later on? Remember, the younger guys will be back again and will bear the scars deep inside.

Tendulkar showed his class. Averages are sometimes deceiving but nevertheless, he managed to eke out enough for all to know he is the best. Dravid was inconsistent. Laxman looked the part at times, but he just seems to not value his wicket enough. Sehwag, Dasgupta and Williams could certainly become good players. Sadly for me, Ganguly only showed moments of brilliance, and that too in the odi series when it never really counted. His inability to play fast short-pitched bowling was exposed and he never showed that he was committed to hanging in and leading from the front. His fielding was easily the worst in the team and even his bowlers became frustrated at times.

The bowling department lacked depth and only Srinath can leave SA knowing that he has gained even more respect from the Proteas. He is a real gem. As for the spin of Singh and Kumble, they were bulldogs without teeth. Singh arrived with a huge reputation. Well, by the end of the tour, even Ntini was slogging him. Khan and Nehra were expected to bring pace and bounce to match Pollock and Hayward. They leave as also-rans with a huge amount of work to do before they even contemplate playing at this level.

Overall, India's tactical thinking turned to naught. There was little attention to detail and sometimes the reading of the match situation was totally incorrect. Twice they let SA off the hook by using the wrong bowlers. Rotating the strike wasn't a priority and allowing the opposition to do it at will showed a lack of insight. Ganguly either had a finger injury (ODIS) or a knee injury (first Test), and eventually succumbed to back or neck spasms. Tendulkar was always running around to either give advice, bowl off-spin, legspin, seamers, open the batting in ODIS and then to score heavily at number four while protecting inexperienced players. He must feel exhausted.

The match referee business was handled so poorly that it overshadowed the tour. The issue is threatening to create a divide in world cricket.But I believe that out of all the bad will come some good. Change is the price of survival and the game will survive, come what may. The support the BCCI have given their players has been wonderful and one thing is certain, match referees from now on must understand that just handing out statements and taking action without any recourse is history.

The England tour to India is going to be a real test for the entire English cricket system. The players as well as those involved in their system will be subjected to trying conditions. Their mindset that the home of cricket is Lord's disturbs many followers and just maybe they also need some reminding that the game belongs to all of us and not only to those with the pounds.

In SA and the rest of the cricketing world, the focus is now on our battle with the Oz. We bat till number nine, so do they. We bowl with discipline; they do so with fire and venom. Our fielding is identical, players on both sides give it everything they have. India has shown that the Oz are not invincible. So which is the top team in world cricket?

Having the Indians here has been fun and I can only thank the players for providing entertainment that we all could enjoy. I hope Indian cricket moves forward after this last debacle and wish all Indian cricket fans the best of luck in the next series.

To Catch A Falling Star