The Padma awards are now more about government favour than merit 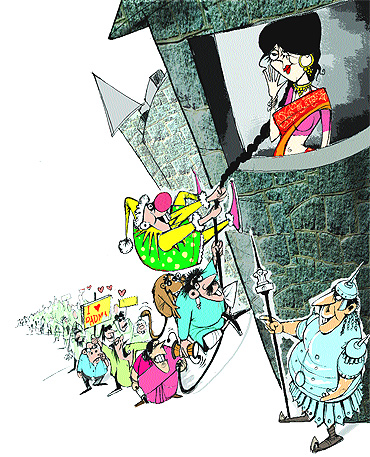 How was temperamental offspinner Harbhajan Singh, who was accused of sledging and even slapping a teammate, more deserving of a Padma award than, say, V.V.S. Laxman, classy Hyderabad batsman and one of the architects of the Indian cricket renaissance. What criterion was considered to judge Aishwarya Rai or the current toast of Bollywood, Akshay Kumar, as being worthy? How does Kalamandalam Gopi, one of the living greats of Kathakali, get equated with half-and-half singer/bigamist Udit Narayan, and that too for a Padma Shri? And irony of ironies, how does one explain the exclusion of wrestler Sushil Kumar and boxer Vijender Singh, who got us two bronze medals at the Beijing Olympics? Both were assured of a Padma but did not make the final grade—they were considered too inexperienced for the awards.

Fifty-four years ago, the Bharat Ratna, the highest civilian award, and the Padma awards (Padma Vibhushan, Padma Bhushan and the Padma Shri) were instituted to honour excellence. Today, with a few honourable exceptions, the award has become an object of adornment, worth lobbying aggressively for. In fact, in the last 25-odd years, the selection process—conducted away from public scrutiny ostensibly to ensure impartiality—has been mired in controversy with even PMs and presidents lobbying for their favourites. Ex-PMs like Morarji Desai, Rajiv Gandhi, V.P. Singh and president V.V. Giri have gone down in Padma history as those who lobbied for candidates due to "political compulsions". Who can forget the clamour for the Bharat Ratna last year with parties fielding names as diverse as A.B. Vajpayee, Kanshi Ram, Jyoti Basu and M. Karunanidhi.

So, what is the process of selection? Well, each September, names of deserving candidates are sought from state governments, cultural bodies, sports federations, reputed NGOs and former recipients of the Padma awards. But the thumb rule for nominations remains the same—keep out known government baiters and those not kindly disposed to the party/coalition in power.

About 1,000 nominations are received every year. These are then vetted by senior officials in the home ministry to weed out those with criminal cases against them. This narrows the list to 500. Then an expert committee comprising officials—the principal secretary in the PMO, cabinet secretary, home secretary, secretary to the president of India and non-official members, usually experts in arts, science and commerce—scrutinise the names.

"At this point, anything goes and sifarish (recommendations) from senior IAS officers and ministers comes in handy. Lobbying reaches a peak as the numbers are further whittled down," says a senior official who admitted to getting his own 'deserving' nominee into the list. This year's non-official committee comprised of former culture secretary Kapila Vatsyayan and cii director Tarun Das, both of whom refused to take Outlook's queries on the selection process. While Vatsyayan's office directed this reporter to the home secretary, Das, despite receiving a detailed questionnaire, chose not to respond. As for home secretary Madhukar Gupta, an "I would not like to comment on the issue" was the pithy response to a question on the government plan to make the award process transparent.

That said, sources say the non-official members on the committee do not have a real say. It is the sarkari voice that finally prevails. "The experts are usually overruled by officials from the PMO. Now, who wants to challenge the PMO?" asks a former home secretary. For instance, Harbhajan Singh's onfield brawls didn't prove to be a disadvantage. Neither did the fact that his name was not recommended by any sports federation. If the babus rule in your favour, you win. Same goes for hockey player Balbir Singh who made it to the list while Harbindar Singh, the accomplished centre-forward, was excluded to the surprise of many. Says former Padma awardee and IIM Ahmedabad professor Anil Gupta: "Tremendous social capital is invested in the awards so it calls for a much greater role for civil society. I do share the anguish of the sportsmen and their coaches who trained them."

Another disgruntled party this year is the Bihar government which nominated 11 people under various categories and drew a blank. Two years ago, a senior doctor from the state made it to the list without any recommendation from the state or any medical body (while the one that was recommended was kept out). The exclusion this time is being attributed to pressure from railway minister, Laloo Prasad Yadav, getting his back on rival Nitish Kumar, the Bihar CM.

According to those in the know, it's an open secret that committee members are often called to include names in the list and exclude others. Highly placed sources said even the President's office is not immune to lobbying. Not surprisingly, from time to time questions have been raised in Parliament about "backdoor entries". It's also odd to see the wives of influential men on the list.

The arbitrariness of it all is explained by P.M. Bhargava, formerly of the Knowledge Commission and a Padma Bhushan awardee himself. He cites the example of Lalji Singh, the man who revolutionised forensic science in the country, who had to settle for a Padma Shri two years ago. Bhargava asks: "What exactly was the criterion for giving a Padma Shri to Lalji Singh (now director of the Centre for Cellular and Molecular Biology)? The man deserved a much greater award for his pioneering work in the field of forensic investigations in the country. It's a complete mystery."

Given the questionable selection procedure, some academics/journalists/ jurists have also said no to the awards. This year, journalist P. Sainath and former CEC James Lyngdoh declined the award. When contacted, Lyngdoh refused to comment. Sainath, on his part, said he refused the official honour because he felt journalists should not be judged by those in power.

Strangely enough, the Padma award has no cash component or any other material benefit. But since it is a national honour bestowed on worthy citizens on every Republic Day, there is a mad scramble for it. Adding to the gloom, the selection process is completely politicised, reducing the awards to the level of a sop netas and babus dole out to favourites.