The Power Of Potential

India must spawn its own intellectual goods 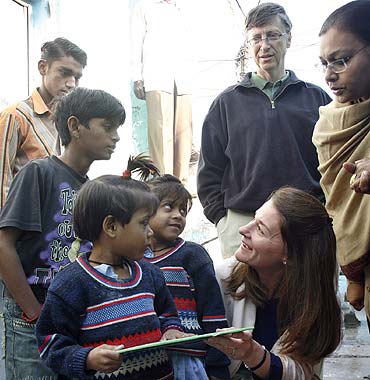 Potential is a fundamentally important principle at Microsoft. As a company, our mission centres on the intersection of technology and potential: we believe that technology is a powerful catalyst for unleashing the potential of individuals to achieve their dreams, of companies to achieve success, and of nations to reach new levels of economic and social opportunity.

Seen from the perspective of potential, India is truly one of the most exciting places on earth. In the 16 years since Microsoft set up operations in India, I've seen first hand the incredible strides the country has made, building an information technology industry almost from scratch. This industry is an engine that has driven the creation of new opportunities for hundreds of thousands of people and established India as one of the world's most important centres for innovation. Thanks to the combination of rapid economic growth, an emerging middle class, and an impressive record of technical excellence, India stands as one of the great success stories of our time.

But clearly, much work remains to be done. For all that it has accomplished, it is India's ongoing potential that makes the country's future so compelling. As impressive as the changes in India have been, the benefits of the rapid achievements in recent years are felt only by a relatively narrow slice of Indian society. For example, India may have one-third of the world's software engineers, but it is also home to one-third of the world's undernourished children. And while India is eighth worldwide in total number of millionaires, it is ranks 127th on the United Nation's Human Development Index. The fact is, India remains a nation where the contrast between poverty and prosperity is stark, and where hundreds of millions of people live in impoverished communities with limited access to basic healthcare and education, much less the tools of technology.

Fortunately, the building blocks for continued progress in India appear to be very solid. We live in a world where access to science and engineering talent is vitally important, and India has an abundance of both. In 2005, for example, India's universities graduated more than 3,00,000 engineers, compared to just 70,000 in the United States. Every time I visit India, my admiration for the talent and skills that India's college graduates possess only grows.

India's deep pool of talent is the reason that we operate facilities like the Microsoft India Development Centre in Hyderabad and Microsoft Research India in Bangalore. Because the ability to access great science and engineering talent is so important to Microsoft, we will continue to expand our presence in India. That's why when I visited India in late 2005, we announced plans to add 3,000 jobs in India over the next three to four years.

This wealth of talent has helped make India a world leader in IT services. Increasingly, it is also enabling the creation of a vibrant ecosystem of software companies that build technology solutions for both international and domestic customers. These companies, which have created more than 1 million jobs since 1999, are an important reason why India has one of the world's fastest-growing economies. And the contribution that the IT sector makes to the Indian economy will only increase in the coming years: according to one study, the software industry's contribution to India's gross domestic product will rise from just 1 per cent in 2002 to 10 per cent by 2008. These are impressive numbers. The question is, what will it take for India to continue to grow and progress? How can India stay on a path that will enable all of its citizens to achieve their potential?

I believe two key steps are critical: one, enabling all Indians—rich and poor, urban and rural—to use the tools of technology to participate in the knowledge economy, and two, strengthening the ability of Indian companies to create and profit from their own intellectual capital.

In today's information and knowledge-driven world, technology access is a fundamental prerequisite for achieving inclusive and sustainable economic growth. Around the world, information technology is helping to lift people out of poverty by providing once unimaginable access to healthcare, to education, and to worldwide markets where they can sell their goods and services. It makes governmental services easier to access and governmental organisations more transparent and more responsive.

The barriers to access in India are significant—particularly in rural India—and they include everything from affordability to language, literacy, communications infrastructure, and more. Solving these problems will require close public-private collaboration that includes Indian governmental organisations at the local and national level, academia, non-governmental organisations, and companies both inside and outside of India.

Microsoft has made a significant commitment to helping India surmount some of these problems. For example, because 95 per cent of Indian citizens don't use English as their primary language, we're translating Windows and Office into 14 Indian languages. At Microsoft Research India, our Emerging Markets Group is working on a text-free user interface designed to enable illiterate and semi-literate users to take advantage of computer applications. To make computing more affordable in India and other countries, we are also introducing innovative programs like FlexGo, which allows consumers to acquire pre-loaded PCs on a pay-as-you-go basis.

We're also working very closely with a wide range of non-profit organisations to accelerate the spread of digital literacy and enable people in some of the poorest regions of India to use the tools of technology to improve their lives. We're working with the Drishtee Foundation, for example, to provide technology and training for 1,400 women in remote villages so they can set up IT kiosk businesses. In collaboration with the Grameen Sanchar Society, we're helping to establish 1,500 community information and services centres that will provide the infrastructure for delivering information and technology training in West Bengal. And we're supporting the efforts of the Indian Society for Agribusiness Professionals to provide training and tools that will enable 44,000 farmers in Maharashtra to access agricultural information and technical assistance.

Sustainable growth that extends opportunities across Indian society will ultimately depend on the ability of Indian technology companies to build their businesses around home-grown innovations. The reason is simple—in today's global economy, low-cost labour no longer provides a sustainable competitive advantage. Whether you are talking about a company or a nation, long-term economic success is ultimately based on innovation. Innovation requires two things: talent and entrepreneurship.

Today, the strength of the Indian IT industry lies in its skill at providing affordable services that support the innovation of other companies. With software exports growing at a rate of as much as 30 per cent a year, the software industry is expected to account for 35 per cent of India's total exports by 2008. But this incredible rate of growth is no guarantee that India will make the transformation from a user of intellectual property developed outside India to a creator of products and an owner of intellectual capital. There's no doubt that India has the talent to make that transformation. But it remains to be seen whether India can create a business climate that fosters entrepreneurship, promotes opportunity, and nurtures innovation.

An important step will be to strengthen intellectual property protection to ensure that entrepreneurs are rewarded for risks they take and the work they do. One recent study found that more than 70 per cent of the software in use in India is pirated. The impact is profound: reducing that number to 60 per cent would mean 50,000 new jobs and $2.6 billion in new business in India. And the impact is felt beyond the numbers—software piracy undermines the efforts of local software companies to build successful businesses and it removes the incentive to innovate that drives growth and opportunity.

Controlling piracy in India is important to foreign companies like Microsoft, which naturally seek to reap the full value of their intellectual property. But it is even more important for India's efforts to build a knowledge economy and a thriving local software ecosystem. Improved intellectual property protection will enable Indian software companies to utilise the potential of the talent they possess to develop products for the domestic market that meet the needs of Indian consumers and businesses and solutions for the international market that offer greater business value and yield higher profits. 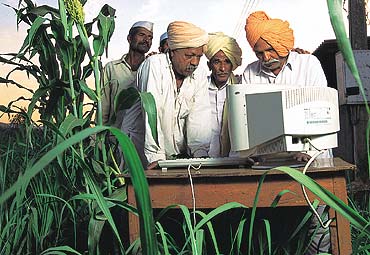 Farmers logging on in Maharashtra

The same holds true for other business sectors. With the expanding international success of India's software, pharmaceutical and entertainment industries, India is poised to become a net exporter of intellectual property. Now more than ever, intellectual property protection is critical to India's self-interest and its future in the world marketplace.

How much potential does India's talent offer? The Imagine Cup world finals, which are taking place this week in Agra and Delhi, provide a good indication. The world's premier student technology competition, the Imagine Cup is an annual event that aims to encourage young people from around the globe to use their creativity and technical skills to create innovations that focus on solving some of the world's toughest problems. This year, more than 180 college and high school students on 72 teams from 44 countries are competing in the finals, including a team from India that has developed a technology called Sonique inspired by echo-location used by bats that can help blind people perceive their surroundings and move around more safely and more easily.

In my travels around the world, I'm often asked what motivates me in my work today. A few weeks ago, we held an event back in Redmond at Microsoft headquarters where I met with some of the Imagine Cup's top contenders, including the Sonique team from India. More than anything else, it is the chance to meet with people like Deepak Jagdish, the young man who demonstrated Sonique, that makes my job exciting. I believe that across India, there are thousands, even millions of young people like Deepak who want nothing more than a chance to gain the skills and access the opportunities that will allow them to make a contribution and change the world. Knowing that in India and many other countries around the world, young people like Deepak Jagdish have a better chance than ever to achieve their dreams and reach their potential is the most inspiring part of my job.

A few years ago, I predicted that the time would come when a person's wages and standard of living would no longer be determined by the country they live in, but instead would be a result of the education they have had. Today, we see this vision starting to become a reality in India. The challenge is to extend progress and opportunity to every section of society and every corner of the nation. If government, business, and non-profits continue to work together to bridge the digital divide and enable India to realise its potential to become a creator of intellectual capital, I believe you will truly become a nation where everyone has the opportunity to achieve their potential.

Together, In A Free Century