The Power Of No

She called it her inner voice. But it sounded like an earsplitting victory cry to the Opposition. Sonia Gandhi introduces a moral language that is foreign to many in Indian politics. Can it work? Update 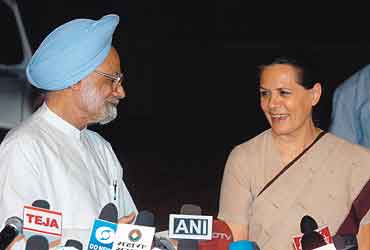 outlookindia.com
-0001-11-30T00:00:00+0553
High melodrama and primetime theatrics marked Sonia Gandhi's repudiation of the office of prime minister last week. On the one hand, Congressmen beat their breasts in full view of TV cameras; on the other, "pasta" jokes clogged SMS channels. Indifferent to both, Sonia, like Julius Caesar hundreds of centuries before her, was repeatedly offered the crown and firmly turned it down each time. By opting for the role of Rajmata rather than Rani Ma, she not only enhanced her stature but punctured the Sangh parivar's campaign against her even before it got off the ground. But by emerging as a parallel power centre, she has also created a dichotomy between the office of the PM and that of Congress president. It is now clear that Manmohan Singh, the incumbent prime minister, will have to liaise with 10, Janpath over every important decision and therein could lie the seeds of future discord.

Sonia gave no tangible reasons for stepping aside other than an "inner voice" which urged her to reject the office of prime minister. In the ensuing sycophancy that was unleashed, no one asked her to explain why; Congressmen focused instead on elevating her to sainthood (she was variously referred to as Gautama Budhha, tapasvini, tyagi and Mahatma Gandhi) and accusing BJP MP Sushma Swaraj, who'd challenged her eligibility to be PM, of being a "blot on the face of Indian womanhood". Throwing parliamentary propriety to the winds, they insisted on referring to Sonia as "Madam Prime Minister". Emotions ran so high during the Congress Parliamentary Party (CPP) meeting at Parliament's Central Hall last Tuesday that Sonia had to threaten to resign as Congress president before the MPs agreed to back down and accept her decision. The script read pretty much like that of her 1999 resignation drama, when she quit as Congress president after Sharad Pawar & Co questioned her right to the top job.

According to party sources, Sonia was rattled by the escalating threat perceptions and by the Sangh parivar's campaign against her. Indeed, senior Left Front leaders reportedly told her a "volatile", Mandal-like situation might arise in which her safety could not be guaranteed. The "taj (coronet)" of prime ministership, Sonia feared, could well turn into a crown of thorns. Her children, Rahul and Priyanka, who sat through the renunciation drama in Central Hall looking downright funereal, reportedly did not want their mother exposed to death threats. Rahul, however, denied that security considerations were a factor: "She went among the people when she was campaigning, she was not worried about security...she has not buckled under pressure," he told journalists. His take on the abdication of power was that his mother felt she had more important things to do.

If Sonia never had any intention of being PM, why had she staked a claim in 1999 and why did the letters of support solicited from the party's allies specifically mention support to a government headed by her? That's a question no Congressman is comfortable answering. Witness party MP Mani Shankar Aiyer's rather convoluted reasoning: "It is now clear that she had intended to say no all along...after the letters of support to her as PM. It was not in reaction to the stupid RSS campaign". Was Sonia out to prove a point to her detractors—that she could have been PM if she wanted but chose to say "no"?

Off the record, party MPs admit that a crashing sensex, the suicide by the RSS activist Mahesh Prabhu, protest rallies all over the country, declarations by the BJP leaders Sushma Swaraj and Uma Bharati that they would mobilise the nation against Sonia, the re-emergence of Sangh leader Govindacharya, appeals to nationalist sentiment—all this, plus the mind-numbing difficulties of running a coalition with the Left Front, could well have contributed to her decision. "She would constantly have been under a scanner. Her every mistake would have been magnified. In Parliament, the BJP would have attacked the government mercilessly and as PM, she would have to bear the brunt of it," said a CWC member, adding that snide remarks about her Italian origins—currently confined to SMS messages—would have surfaced in Parliament every day.

It would have been hard to get past the foreign origin issue, which the Sangh parivar has belatedly decided to highlight. A petition against her hypothetical candidature for prime ministership is to be heard by the Delhi High Court on May 26, in the course of which the "conditional" nature of her citizenship, the question of "reciprocity" vis-a-vis Italy and the fact that her Italian citizenship is inalienable are likely to come up. Although the nda reportedly rejected the idea of making a formal appeal to President A.P.J. Abdul Kalam to refer the citizenship question to the Supreme Court and the Rashtrapati Bhawan officially denied press reports that Kalam had asked Sonia for clarifications regarding her citizenship, rumours that he had informally expressed his reservations were rampant. 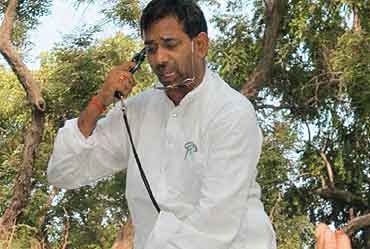 Either way, say Congress leaders, her every initiative would have been seen in the light of her "naturalised" status. The new government's ability to take hard decisions on economic reforms, foreign and defence policy would have been compromised. Handling ticklish internal security issues, particularly Kashmir, would have become difficult. The media and the Opposition would have been all too quick to suss out a Bofors under every bush. Sonia would have been constantly on the defensive. Manmohan Singh, who enjoys tremendous goodwill among political parties across the board, is a much harder target.

By saying "no", Sonia has become a martyr. "By abdicating, she has reintroduced sacrifice into the vocabulary of Indian politics. She's become the leader of the nation, not just of the Congress," said Congress MP Ashwini Kumar. The Congress can now garner tremendous political mileage, with the Sangh parivar on the defensive. "You will see her come back with a thumping majority in the next general elections. And that is when the children will move in," said a Congress MP. For Rahul Gandhi, it is the beginning of a five-year internship. As for Priyanka, speculation has it that at some point, she will inherit Rae Bareli from her mother.

At least the initial public response has been a source of satisfaction for Congressmen.As a stunned nation and opposition saw the drama unfold at the Congress Parliamentary Party meeting on television, there was much applause for her renouncing the top job and putting party and nation before her self. The official assessment from 24 Akbar Road was that the move was a masterstroke that has found a resonance among even the cynical middle-class BJP supporters.

But with Sonia Gandhi having acquired the status of someone who had made the ultimate sacrifice, Congress leaders say an interesting and unprecedented scenario will now develop, with the party far more powerful than the pmo. Indeed, the race for membership of the Congress Working Committee is as intense as that for the Union cabinet. More so because Rahul Gandhi is expected to join the AICC shortly and take charge of UP and Bihar. Sources said he's going to take personal interest in UP and it is his team which will eventually take over the reins of the party.

The other interesting aspect of last week's exercise is the way senior Congress leaders have buried the hatchet and hung together. Even Pranab Mukherjee and Arjun Singh forgot their mutual animosity and discovered common ground, as did Ghulam Nabi Azad and Salman Khursheed, Sheila Dikshit and Ambika Soni and Kamal Nath and Digvijay Singh.For the Soni, Jairam Ramesh and Khursheed combine—all of whom are cosy with the new PM—things couldn't have turned out better. Even AICC secretary Dalbir Singh, a devout Manmohan camp follower, finds himself suddenly in demand! Members of this group, who could well become the link between the party and the government, will play a critical role.

For PM-by-nomination Manmohan Singh, there's a positive and a negative aspect to "remote control" politics. On the plus side, he has the luxury of being PM without having to bother about political management and party affairs. On the other hand, his every decision will have to have a stamp of approval from 10, Janpath. A call from a general secretary of the AICC will carry as much weight as a ministerial directive. "When Rahul said there won't be two power centres in the party, he was right. There's only one and it is 10, Janpath," quipped a CWC member.

His other problem has to do with his 'Mr Clean' image. "Congressmen have been out of power for six years. They are hungry. We will have to see how he can handle that," admitted a party functionary. His more obvious problem is that he will be constantly hamstrung by the Left and the allies.At every step, he is going to have to convince the Left Front to toe his line and to soothe ruffled feathers. He trod a fine line all through last week, hedging on disinvestments and seeking to reassure both the Left and Indian Inc: "We are not committed to privatisation as an ideology, only where it serves the national interest...the Left is firmly committed to the success of this government". Clearly, the office of the Minister of Parliamentary Affairs will be important as never before. And Sonia's newly acquired moral authority will constantly have to be brought to bear on fractious allies.

Even before the swearing in, coalition tremors were felt when RJD chief Laloo Yadav threw a tantrum because he was not getting a portfolio of his choice. Similarly, the trs raised the pitch over the common minimum programme.

Whether Manmohan will go the way of P.V. Narasimha Rao and Sitaram Kesri, both ex-sycophants who developed minds and ambitions of their own after being nominated as Congress president by Sonia Gandhi, is the question uppermost in every party MP's mind. There are safeguards against vaulting ambition which weren't in place earlier. After all, Ms Gandhi remains both party president and chairperson of the CPP, which means that she decides who will head the government. She can pull the plug on Singh anytime she cares to—and take over the reins herself. On the other hand, the office of PM is a solid counterweight. And he certainly cannot be pushed around. Beyond a point, he is inclined to pack up and quit rather than fight his corner.

Manmohan Singh, who is seen as a 10, Janpath loyalist but by no means a sycophant, was not an accidental choice. Sonia enjoys a high comfort level with him and he was seen as an alternative to her (Outlook, Feb 2) if the eventuality of her stepping aside ever arose. It was he who was at the forefront of negotiating many of the alliances which allowed the Congress to breast the tape in the Lok Sabha elections. At his first press conference after being elected CPP leader, he sounded surprisingly political: he harped on the country's secular identity, continuing the peace process, the promise of stability and a war on poverty, ignorance and disease. But his morbid fear of the press, compulsive reserve and hesitancy in dealing with issues other than economic could prove to be a cause for concern, particularly on the floor of the House, partymen admit.

Thanks to Sonia's act of renunciation, the new government starts on a note of great goodwill, moral authority and a thoroughly cowed Opposition.That's a rare moment in Indian politics. Question is: how long will it last?